The young Diego Sanchez knew what he wanted to be when he grew up, as he shadowboxed in a local mobile home park in Albuquerque. More importantly, in addition to wanting to be a fighter, he knew the kind of fighter he wanted to portray to the world.

When Sanchez was growing up, THE sports franchise in the ABQ was Tapia, a tattooed dervish whose harrowing upbringing wasn’t soothed in the slightest by his ascension to the top of the boxing world. But through the good, bad, and ugly of his life, he retained a devoted fan following that loved the troubled man outside the ring as much as they loved the world champion inside it.

Sanchez was one of those loyal fans.

“I knew Johnny and he had a good heart,” he said of Tapia, who died at 45 in May of 2012. “I remember being a kid and watching him hitting himself in the ring like ‘come on, come on.’ That pumped me up when I was training. I followed him and I loved the guy. He gave me some boxing privates, and I always had a heart for him because I know he had a lot of ups and downs and a really hard life. But Johnny was real. And I apply that same principle. We’re real people, we’re all human beings, and we’re made of the same stuff.” 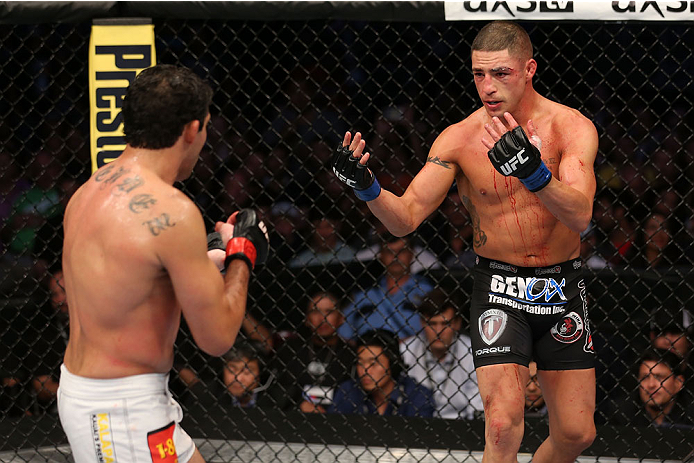 Not always. Some people, particularly prizefighters, have more “stuff” in their chest than most of us. And it’s this heart that has separated Sanchez from the rest over the years, garnering him a following that can easily be described the MMA equivalent of Tapia’s. So when he emerged from his UFC 166 bout against Gilbert Melendez last October bloodied, bruised, yet unbowed, the end result – a unanimous decision win for Melendez – didn’t really matter to Sanchez’ fan base. Once again, he delivered what they paid to see.

“That’s why I fight the way I do,” he said. “I fight for the fans. I appreciate the fans, my career, and I’m gonna give it 110 percent for what I’ve got left in this sport. They’re the ones who have given me the support and given me this career. I always remember the movie Gladiator, and the guy’s telling him ‘you win the crowd, you win your freedom.’ That always stuck with me, and from the moment I’ve been a competitor, I’ve been somebody who can gain energy from the crowd.”

Six Fight of the Night awards prove it, and while he hasn’t been able to secure a world title yet, that’s almost become secondary to watching him perform when the Octagon door is shut and he’s stalking his opponents with a scary intensity. He does realize though, that at 32, his window is closing if he hopes to one day wear championship gold, and the loss to Melendez opened his eyes to that reality.

“It was a tough loss,” he said. “I feel I was close to getting the victory, so I got really motivated and just want to bounce back and come back better than ever. All in all, in the last fight I took it for what it was and I realized my weaknesses and I really went to work on those weaknesses. My footwork sucked, and I was too much of a headhunter, and there were a lot of points in the fight when I could have been better. And it took me losing that fight to realize that.” > Watch: Melendez vs. Sanchez on Fight Pass

This Saturday, Sanchez – 3-2 in his last five bouts – is in a classic crossroads bout against unbeaten Myles Jury. For “The Dream,” it’s almost a must win if he wants to eventually challenge for the 155-pound belt a second time. For Jury, a victory propels him up the ladder in the crowded lightweight division and gains him the kind of attention beating a veteran like Sanchez often does. Sanchez remembers what it’s like to be the young gun with a zero in his loss column, though as he points out, Jury has already tasted defeat in the form of a decision loss to Al Iaquinta in a TUF 15 bout that didn’t count on his official record.

“We were probably a little different, me and Myles,” said Sanchez. “When I was 13-0 my hero was 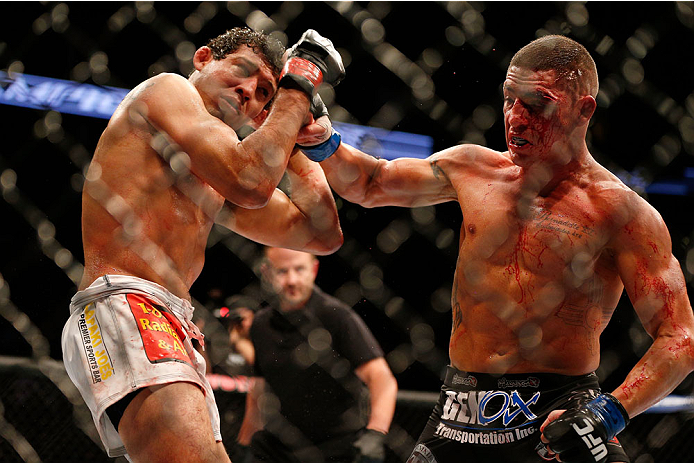 Rickson Gracie, who was the greatest, and at that time I really, truly believed in myself that I could be the greatest and that it was my destiny. And to a certain extent, when you’re undefeated, you have this sense of invincibility. I know that Myles wants to believe it a little bit, but the fact of the matter is, he’s really not undefeated. He did lose a fight on The Ultimate Fighter, and even though he put up a good fight and it could have gone either way, he did lose that fight although his official pro record says he’s undefeated.”

Sanchez chuckles, but turns serious when you ask him if he still feels that he has greatness in him.

“Without a doubt,” he said. “I keep my dream alive. The thing that’s inspiring me is that my whole career, I faced a lot of outside the cage self-destruction, I was young and I got into stuff I shouldn’t have, I was a little mischievous, and I believe that cost me becoming the champion and the opportunities that were presented to me. In 2010, I turned it all around with my wife and family and I really did a 180. I got my stuff together, got my head right, but then after that I had a couple years of injuries. Going through these injuries made me have this gratitude and appreciation for what is left, and anytime I get in the cage, the feeling of the canvas, the feeling of the fans, the feeling of going to train and running up a mountain, I love it. Before I didn’t appreciate it and I didn’t have the love. That’s made me a better fighter, a better man, a better warrior. > Watch: Countdown to Sanchez vs. Jury

“Now I apply a little realism to my career,” Sanchez continues. “I understand I can’t fight forever, and that the injuries can pile up, so I know that I have to make the absolute most out of every training session, out of every diet, out of everything I do in this sport. I have to do it.”

Johnny Tapia would be proud.