"I’m looking to shake up this division and give this stacked lightweight division an earthquake of a shake." - Diego Sanchez 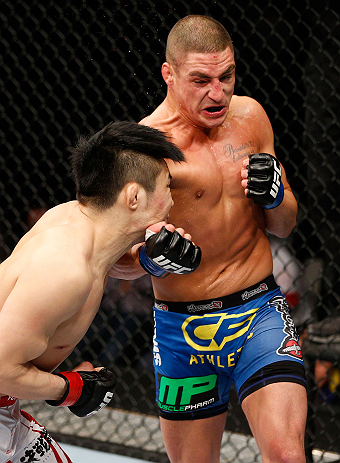 For a fighter who seemingly runs on emotion, Diego Sanchez doesn’t sound angry when he talks about what is perceived as his place in the lightweight pecking order heading into his Saturday night bout with Gilbert Melendez.

“I’m absolutely being overlooked,” he said. “People are thinking that I’m on my way out.”

That may be hard to fathom considering that “The Dream” has won three of his last four bouts, picking up three Fight of the Night bonuses along the way. I guess if you’re going to be on your way out, that’s the only way to go.

But beyond the numbers, you could look at Sanchez’ sluggish performances against Jake Ellenberger (a 2012 decision loss) and Takanori Gomi (a March decision win), a battle with the scale before the Gomi fight, and a series of injuries that kept him sidelined for the previous year and say that at 31, the wars just may be starting to catch up with The Ultimate Fighter season one winner, only one of four members of that cast (along with Josh Koscheck, Mike Swick, and Chris Leben) still on the active UFC roster.

“I’m the biggest underdog I’ve ever been in my life,” he said, “but I fought Ellenberger on one leg, so my striking looked horrible. I fought Gomi after recovering from shoulder surgery with a torn pec, and my boxing wasn’t where it had to be and I had to cut 55 pounds in two months. So I had a hard cut, I missed weight, but this time it’s going to be different. I’m healthy, I’m strong, I learned from my experience in Japan and I got my weight under control.”

It’s what any fighter looking to return to prime form will tell you, but for better or worse, Sanchez has always been a straight shooter, so if he tells you something, you can usually take it to the bank. In fact, he even said the one thing that you never hear from a fighter, and that’s that he’s one hundred percent heading into Saturday night’s bout. He admits it’s the first time he’s ever been able to say that.

“I have to have the right opponent to make that magic, and Gilbert’s the person,” he said. “Me and him, when we used to train together, every single round we made magic, so I always knew that if we were ever going to fight, it was going to be something special.”

The two trained together for a stretch in San Diego before Sanchez made his first move from 170 pounds to 155, but once he decided to chase after then-champion BJ Penn’s lightweight crown, Melendez said that their training days were over. It was an amicable split, and despite Sanchez’ ultra-intense approach to fighting, he doesn’t have a problem throwing fists and feet with someone he likes.

“I’ve done that plenty of times,” he said. “The first one was Kenny Florian. I was really great friends with Kenny. Me and Josh Koscheck were training buddies on the show. So it’s no stranger to me, and I’ve always been able to fight whoever’s standing in front of me. I know that when the door locks it doesn’t matter who you are or what you said. None of that matters. It’s all about the training you put in and the work that you put in the gym and what you’ve done to earn the victory in all aspects.”

So what flicks the switch from ‘hey, we’ll grab a beer after the fight’ to ‘well, if I don’t knock you out first.’?

“For me, as soon as I put my hood on and I’m walking down and they’re playing my music, it’s on,” said Sanchez. “I’m blocking out the fans and I’m getting ready to go into a street fight. I’m going in there to survive, and for my life I’ve got to take this guy out. So it doesn’t matter who he is; he’s trying to take my family’s food, my career, my hard work, and it’s my job to stop him. If anybody gets in that cage with me, it doesn’t matter who they are; I’m gonna snap into that warrior, and that’s what it’s all about.”

Actually, it’s more than that, especially this time around for the former world title challenger. And when he steps into the Octagon to meet Melendez, the Californian may be bringing the storm of “El Nino,” but Sanchez is planning on bringing something even stronger.

“I’m looking to shake up this division and give this stacked lightweight division an earthquake of a shake,” he said. “I’m gonna shake it up and let Dana White, Lorenzo Fertitta, the fans, and everybody know who the number one contender is. (UFC lightweight champion) Anthony Pettis and TJ Grant are great fighters, and I’ve got a lot of respect for them, but there’s someone else, and I believe that right now I am fighting the real true number one, Gilbert Melendez. I believe he beat Benson Henderson, I believe he’s the toughest, most well-rounded fighter in the division, and I believe I’m going to go in there and dominate the number one guy and prove that I am the number one contender.”