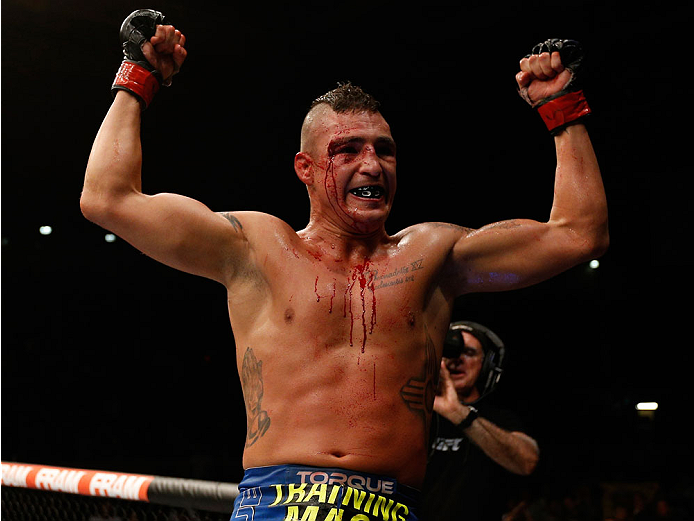 In a strange way, it seems fitting Diego Sanchez is the last man standing from the inaugural season of The Ultimate Fighter.

That’s not taking anything away from the handful of fighters who went on to memorable careers and those like Forrest Griffin, who would not only win a title but be inducted into the UFC Hall of Fame, because those competitors demanded attention in their own right. Yet, even in a group that wasn’t lacking in the personality department, the young New Mexico native stood out from the rest.

There was just something different about “The Nightmare.” Following his victory on season one of TUF he entered the UFC ranks as intensity personified, and more than a decade later that still holds true. Plenty has changed for Sanchez during his time competing inside the Octagon, as the Albuquerque-based fighter has competed across a slew of different weight classes and gone toe-to-toe with a collection of each division’s best in the process.

During that time, every one of his castmates from The Ultimate Fighter house have either moved on to other organizations or have hung up the gloves for good, and a new generation of mixed martial artists have risen to the forefront of the sport, but Sanchez is still swinging in both the literal and metaphorical sense. Much like he’s displayed time and time again in his career inside the Octagon, there just isn’t a drop of quit inside of him, and Sanchez’s dogged determination to triumph over adversity still rages on.

“Above all else, I always give the credit to God for allowing me the longevity I’ve had in my career and giving me the wisdom to train intelligently,” Sanchez said. “I was inspired at a young age by Rickson Gracie, who was kicking all the top black belts’ butts when he was a 50-year-old man, and was really drawn to his love for yoga and animal movements. His approach to longevity was really above and beyond, and I also learned a lot of what to do and not to do by my coaches on The Ultimate Fighter.

“I’ve always had the will to compete, and the big fights bring out the best in me. I love a big challenge, and rising above the Goliaths that are standing in my path as impossible feats is so mesmerizing you can’t wrap your mind around it. There are a lot of reasons and things that play into the reason I’m the last man standing from the first season of the show. It’s not only that I was the youngest fighter there, but I was wise about my career and always had good people around me. I’ve been blessed with talent and I’m a durable athlete.”

The 33-year-old veteran is willing to push himself far beyond the reaches of his comfort zone to meet his lofty sense of expectation, and his latest endeavor is a clear example of the lengths he will go to do so. Following his victory over fellow TUF winner Ross Pearson back in June of 2014, the Jackson/Winkeljohn product made the decision to drop down into featherweight waters and try his hand at yet another weight class.

When the former lightweight title challenger steps in to make his 145-pound debut against Ricardo Lamas this Saturday at UFC Fight Night: Gastelum vs. Magny in Monterrey, Mexico, it will mark the fourth different division the hard-charging Sanchez has competed in during his time in the UFC. In doing so, Sanchez jumped out of one shark tank and into another and it was a move that required the former middleweight to adjust more than just his training regimen inside the gym.

Sanchez had to change his entire lifestyle in order to bring his mind and body to a place that would allow the best of him to shine on fight night, and he’s quick to admit that was no easy task. Furthermore, Sanchez also credits his inspiration from an unlikely place in the form of current interim featherweight champion and regular social media sparring partner Conor McGregor.

“One of the reasons I dropped down to 145 pounds for this fight is because I saw the huge success he was able to have at this weight,” Sanchez said. “He’s my size and if he hadn’t competed at this weight and done what he’s done then I probably would never have made the decision. Just knowing there is a guy out there who is my size and has done it made me realize this is feasible. That being said, it has to be done to perfection. It’s a high risk/high reward situation and one that comes with a lot of sacrifice.

“I don’t get to eat that much but it’s making me stronger mentally. I always focus on the positives, but it’s not easy. I look at it like climbing Mount Everest or doing that race in Death Valley where it takes a lot of preparation and commitment. That’s where I’m at with this weight cut. It’s extremely hard and is not for the weak-minded. Even Conor is talking about going up to 155. He had to put his time in at 145, but he’s almost ready to go up because it’s hard to make this weight. Look at the reward he’s had though. He’s made a million dollars in this sport, and if he didn’t have the discipline it never would have been possible.”

Even though Sanchez’s career is lined with classic battles and memorable tilts, that doesn’t stop him from aiming to make his bout with Lamas his best yet. The former title challenger has an equally action-packed style and Sanchez believes the pairing has all the makings for them to put on a show the fans in Mexico will embrace. And with both fighters having strong ties to their Latin American heritage, Sanchez is confident he and Lamas will give the passionate collective in Monterrey something they can be proud of.

“We love our heritage and we are doing this to promote the sport in Latin America,” Sanchez said. “We want them to develop the same passion and love for MMA they have for boxing. Ricardo and I have a tremendous amount of respect for one another. We like each other and that’s very rare in this sport. We have a mutual respect but we are going to war. He’s going to try to hit and run and I’m going to stalk him. We are going to give the fans the best fight they’ve ever seen in Mexico.”