Diego Sanchez Has A New Mindset

After 15 years in the UFC, it took a pandemic to change the ways of Diego Sanchez
By E. Spencer Kyte, on Twitter @SpencerKyte • Sep. 21, 2020

Before Forrest Griffin and Stephan Bonnar set Spike TV ablaze and helped change the course of UFC history, a 23-year-old Diego Sanchez strolled into the Octagon and mauled Kenny Florian to win the middleweight competition on the first season of The Ultimate Fighter.

Sanchez fought twice more that year, registering victories over Brian Gassaway and Nick Diaz. He’s made at least one trip into the Octagon every year since, competing in four different weight classes, one world title fight, and seven contests that garnered Fight of the Night honors, including his 2009 Fight of the Year scrap with Clay Guida that was enshrined in the Fight Wing of the UFC Hall of Fame as part of the Class of 2019.

This weekend in Abu Dhabi, 5,649 days after registering his first UFC appearance and victory, Sanchez will make the walk to the Octagon for the 32nd time, stepping into the cage opposite Jake Matthews in search of his 20th career UFC win, and he’ll do so with a very different mindset than in previous years.

“The start of the pandemic was a huge relief for me, actually,” admitted the 38-year-old veteran, whose UFC career began when his opponent was 10 years old. “I’ve been going for 15, 16 years with the UFC and my life has been non-stop.

“I never took a year off. I never stopped. I went camp to camp to camp, and when the pressure was relieved, and my daughter couldn’t go to school — everything was shut down and we were forced to stay home — I got some good rest that my body, my mind, and my soul really needed.

“Then there was the middle part of the pandemic, where I got a little chunky, drank a little too many White Claws,” he added with a chuckle. “But then I whipped myself back into shape, got motivated, and got a fight, so here we are now.

“All the way from The Ultimate Fighter house and the original TUF gym in Las Vegas to Fight Island,” Sanchez said, the pride he carries for the career he’s built radiating in his voice, even though his tone remains quiet and measured.

For many years, Sanchez was as indefatigable outside of the cage as he was inside the Octagon.

He trained relentlessly and pushed boundaries, searching out every edge and advantage he could find while struggling to balance his professional pursuits with the sudden influx of notoriety, attention and money that followed his early UFC success. He switched gyms, switched divisions, and switched nicknames, all the while remaining in dogged pursuit of championship gold.

He talked about anti-aging and outworking his younger training partners. Each loss was followed by promises of a return to the win column and another championship opportunity in the not too distant future.

When he lost back-to-back fights to Al Iaquinta and Matt Brown by knockout and many believed his days competing inside the UFC cage were numbered, Sanchez responded with consecutive dominant efforts against Craig White and Mickey Gall to once again leave fans and observers shaking their heads in disbelief. They also strengthened his feeling that he had plenty of good years left and that claiming UFC gold remained a distinct possibility.

“(I was always) just putting the pressure on myself to not stop, to keep the ball rolling,” he said, reflecting on his 15-year UFC career and the singular focus on reaching the top of the mountain that propelled him so many years. “I know that being a UFC fighter is a momentous career and if you lose that momentum, it’s gone, so you have to keep the ball rolling or you will fall off.

“That’s one of the things I’ve been able to do throughout my career, and it has kept me in the UFC. That was my principle: keep the ball rolling, get another fight.

“I’ve been going through a lot of self-healing and getting right, and knowing that the end of this tunnel isn’t the end…”

His voice trails off, the power of the revelation he’s comes to over these last several years taking the air out of his lungs, causing the usually non-stop talker to pause and gather himself before continuing.

“It’s not the end,” he said, picking back up. “I’m a human being, not ‘UFC Fighter Diego Sanchez.’ That’s not my identity.” 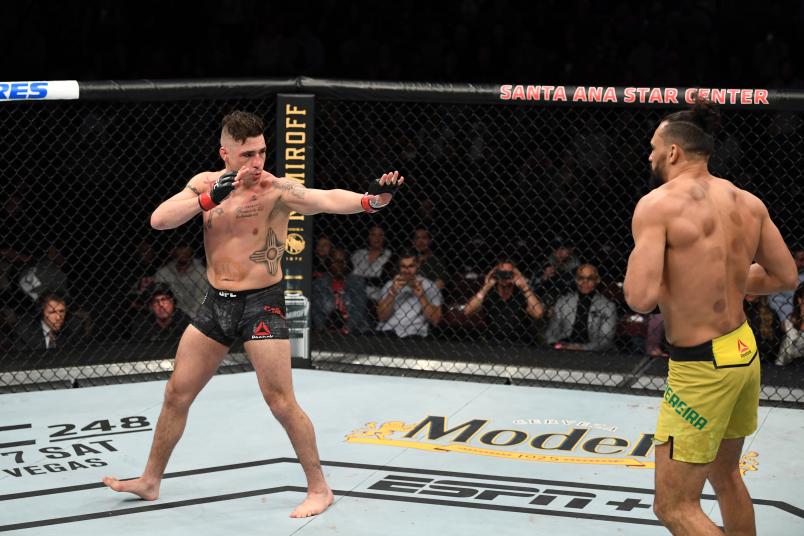 That’s a massive departure from the way Sanchez viewed himself, expressed himself, and carried himself for the last 15 years.

Being “Diego Sanchez, UFC Fighter” was his identity and being anything else besides a mixed martial artist in relentless pursuit of the next fight that would bring him closer to winning championship gold didn’t seem to make sense to him. Even when the victories started to be harder to come by and the miles continued to pile up, Sanchez was convinced, almost defiant at times, that he was still going to reach the top of the mountain because that’s who he was and what he was supposed to do.

But now, after more than 15 years of chasing the same goal with unbridled determination, a more accepting Sanchez has emerged.

“This pandemic has forced me to see what is inevitable,” he began. “I have four more fights in the UFC and I’ll be happy to get those last four fights, invest the money I make, and retire.”

Retirement wasn’t a subject Sanchez wanted to discuss as recently as the start of the year, but being forced to take a break for the first time in 15 years finally gave him the chance to do two things he’s needed to do for quite some time: understand that none of us can fight forever, literally or figuratively, and catch up on some much needed sleep.

“I caught up on years of sleep,” he said, excited to discuss his hibernation habits over the past several months. “Like, I remember going down and passing out for 12, 13 hours on the regular. I caught up on some rest, and now I feel great. I feel rejuvenated and excited to go out there and continue creating this legendary legacy I’ve been creating.

“I’ve done more than most men have ever done in the UFC — I’m already a legend — and now, it’s just about finishing the right way; going out there and executing with these opportunities that I have.”

For the first time in a number of years and multiple interviews, Sanchez didn’t finish his statement about the future talking about chasing down UFC gold.

There was no “I’m only a couple wins away” or mapping out what it would take the land a championship fight in the next 12-18 months. There wasn’t any talk of destiny or still having four, five, six more good years left in order to pursue the one thing that has escaped him to this point in his career.

Instead, he was simply excited about the opportunity at hand — facing Matthews and competing on Fight Island — and content to still be doing what he loves, minus all that pressure he put on himself for all those years.

“It’s nothing personal with Jake, but you’re going to see a different Diego Sanchez going into this fight because I’m relaxed now,” he said. “I’m calm, I’m confident in who I am and in my capabilities and I’m going to go out there and perform.