"I always see what is next, not what can be after that. Now I'm focused on Florian and what I can do to beat him." - Diego Nunes 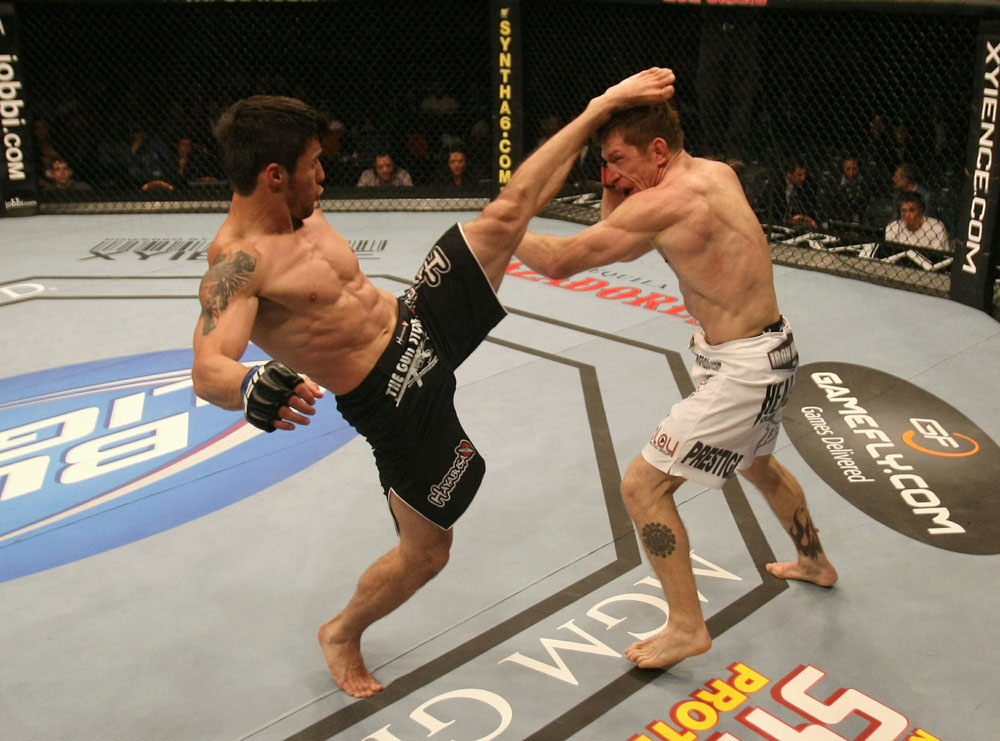 The first impression we have about a particular person may be different than the one you get when talking to him, and sometimes what looks bad may be good in reality, and vice-versa.

Brazil's Diego “The Gun” Nunes, one of the most talented featherweights on the planet, knows this kind of situation well. Training in different academies until ending up at Nova Uniao, a team he calls family, Nunes - who faces former lightweight title challenger and debuting 145-pounder Kenny Florian this weekend in Vancouver -  experienced being the victim of wrong impressions by those who didn't know him well.

Handsome to the girls, the kid from Caxias do Sul says bullying was a constant for him while he was still at school because his jealous classmates thought Nunes only did it to provoke them. Today, the fighter still deals with that misunderstanding, as his tattoos, easy going personality and good sense of humor lead him to be described as a "crazy playboy" rather than the nice and religious person he is.

"I have been under that and other labels more when I was young than now," Nunes said. "From school until that first day of training inside a new academy, I noticed that a few observed me a different way than I really was. Going through those difficulties early in my life was an education for processing it without problems."

Listening to Nunes more and more, we see an extreme difference between funny and crazy. The plans of the 28-year old pupil of Andre Pederneiras were always very focused on starting a family along his wife Sabrina, a woman he says comes from God's wishes, and whose plans matched his own.

"Since I started my martial arts life I was alone," he says, not only referring to being without a girlfriend, but without many friends and family around. "I didn't have affection from a girlfriend or a loyal friendship, so I asked God to put on my road a girl like this, and like that He sent me my wife about three years ago. She’s a person who completes me. My dream was always to have a family; I visualized this picture of me, my wife and kid, which we intend to have as soon as I acquire a more stabilized fighting career."

A solid career means beating foe after foe until reaching the title picture, and Nunes, a former WEC featherweight, has been good at it. Dropping only one fight since he turned professional (a unanimous decision loss to L.C. Davis), “The Gun” dispatched 15 adversaries until the WEC's merge into UFC.

Earlier this year, he stepped in the Octagon for the first time to square off against former WEC featherweight champion Mike Brown at UFC 125. The fight was expected to be a war, and the result, a split decision victory for the Brazilian, indicated that. With a left eyelid completely swollen since the half of first stanza due to Brown's strikes, Nunes dodged further harm while trading bombs and avoiding the takedown attempts of the former champion. The damage of first round seemed to be the injection of life he needed, as Nunes came back strong with axe and spinning kicks in rounds two and three.

"I loved kicking since a kid, and I got into kung-fu and tae kwon do classes before my pro training with kickboxing and Muay Thai, so I just sharpened a natural talent," he said. "I grew up taking beatdowns, and I learned a lot from them, so since I was a kid I had this aspect of never surrendering. I keep calm under the storm because due to what I passed through in my life I know nothing worse can happen. If the guy hits me once, I want to hit him twice. That is my motivation."

Breaking the seriousness of his aforementioned statements, Nunes then shows his funny side, recalling that the efforts to turn nightmares into dreams come from the Japanese Manga series (famous in its homeland and Brazil), Knights of the Zodiac. More precisely from all the suffering that lead character Pegasus Seiya went through in the majority of the episodes, only to shine in the end.

"My teammates laugh a lot when I say that, but I was a kid watching this cartoon where Seiya was getting wounded fighting against much larger and powerful enemies and that was impressive," he says, smiling. "He kept going after them in spite of all the adversity and I have that going on in my fighting career too."

Jumping back to the real world, his next fight is the UFC 131 bout against a no joke in “KenFlo.” Nunes knows the fight can be much more different and tougher than the UFC debut. Facing an original TUFer, and former middleweight, welterweight and lightweight competitor in Florian, the Brazilian considers his upcoming foe to be almost a mirror image of himself.

"I think Brown sticks to his game plan of takedowns and ground and pound, making the fight a little boring," he says. "KenFlo has speed and likes to land kicks, working in and out until getting his opponents into his comfort zone. I see this fight being the greatest of UFC 131, no doubt."

If all things are equal, Nunes sees a small advantage for him in this main card bout since he has been fighting as a 145-pounder since 2008, while Florian will taste life in the division for the first time ever.

"I know he's a fighter with all kind of professionals helping him to get ready in a new weight class, but training is training and a fight is a fight," he says. "I don't see him getting 100% in a new division I have been in since 2008. I believe he’ll lose something - I don't if it will be stamina or strength - but I see one small point of advantage for me."

If Nunes beats the TUF 1 finalist, he’ll move into title contention, but it won’t be the way it is for most fighters, mainly because the man who holds the UFC belt in this division is his teammate and personal friend Jose Aldo.

"I always see what is next, not what can be after that. Now I'm focused on Florian and what I can do to beat him," he said. "My objective is a belt, but I can't let myself imagine, just for a hundredth of a second, where I can be after this fight. Aldo is a brother, a close friend and a worthy teammate and I can't deny that we already talked about it with our coach and managers."

And what was the verdict?

"Wait and trust," Nunes says, smiling, but keeping the suspense. "For now, I have only one target, Florian. The rest comes after, and only after, will something come."