"He (McGregor) just talks. The whole month he’s been talking crap. But the talk is over." - Diego Brandao 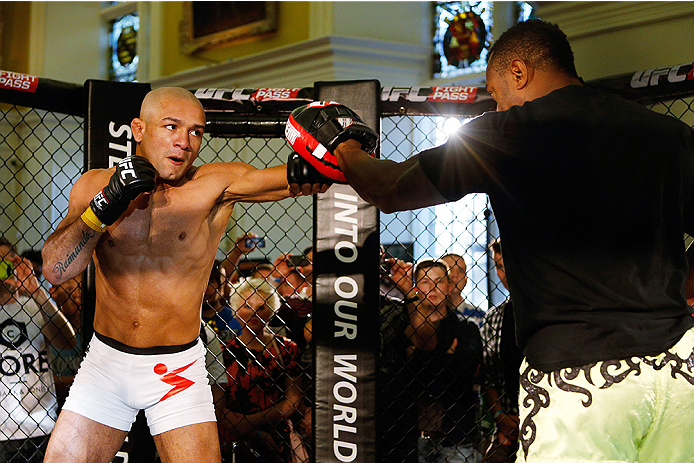 After having his last two fights canceled, one due to the release of his opponent (Will Chope) on fight week, the other (against Brian Ortega) coming undone thanks to a hand injury, I figured it was the right time to ask Diego Brandao about the bad luck he was having.

Apparently, he assumed I was talking about that afternoon’s World Cup match between Brazil and Germany, which saw Brandao’s home country fall into a quick two-goal hole. It would get worse, but not in the world of “DB,” a young man who has found out that in every walk of life, things have a way of working themselves out.

“I know everything happens for a reason,” said Brandao, who has been eager to get back in the Octagon and back to business ever since a disappointing UFC 168 loss to Dustin Poirier. In that fight, Brandao missed weight, was plagued with rumors that he hadn’t even trained for the bout, and almost got into a weigh-in day altercation with his opponent. At that point, seeing his three-fight winning streak snapped was the secondary story.

He would be given chances to redeem himself against Chope and Ortega, but both fell by the wayside. Yet when Cole Miller was forced out of this weekend’s bout with McGregor due to injury, the former Ultimate Fighter winner didn’t hesitate to step in to battle the Irish hero.

It’s the kind of fight that can be career-altering in a good way for Brandao. McGregor, despite this being only his third UFC fight, comes in with enormous amounts of hype that have made him a headliner in his hometown.

“I don’t know why Conor’s so big in the UFC right now because he only has two fights, but I don’t care,” said the Fortaleza native.

He should, because if he can slow the McGregor train down or derail it momentarily, the Poirier fight gets forgotten. Well, forgotten by everyone except Brandao.

“Poirier, he talks a lot of crap,” said Brandao. “He had no respect and he got into my face, and he’s the next guy I want. I want a rematch. Poirier, I will knock you out, one hundred percent. I didn’t even train for that fight and I almost knocked you out. He knows he didn’t knock me out.”

All of a sudden, the focus shifts and Brandao talks to someone close to him.

Brazil is getting the short end of the stick in their World Cup semifinal, and the match will end with a score of 7-1 in favor of Germany. It’s a devastating defeat for the nation, and McGregor, no stranger to gamesmanship, posted the following note on Twitter in response:

“The Brazilians got buried tonight. On July 19th I bury one more.”

It’s the kind of stuff that can get any fighter fired up, and Brandao has seen every post, heard every comment. And he’s letting it go.

“Whoever has a mouth talks whatever they want, so he can talk on the internet,” said Brandao. “He talks a lot of Twitter, he’s saying he’s going to eat my soul, he’s going to do this and that, and I can’t wait to get there and say ‘the talk is over.’”

It’s a calmer, dare I say gentler, Brandao these days. That doesn’t mean he’s above enjoying a little gamesmanship himself.

“I watched his tapes, but I already know where he’s strongest,” said Brandao of McGregor. “All he has are 1-2s. But in jiu-jitsu, he sucks. His standup, it sucks. I have all the tools – I have jiu-jitsu, I have strength, I have power. He punches like a girl.”

This kind of back and forth has fans amped up for the fight, and the O2 in Dublin will be packed to the rafters in support of their native son. Brandao doesn’t mind being the bad guy, and in appreciation for the fans showing up, he promises them a fight.

“I’ve got a lot of power, a lot of speed,” he said. “I feel I want to put on a great show. I don’t think about going there and finishing the fight in the first round; I think about going down there, and I don’t care if it’s five rounds. I’m in condition, I’m on another level. He (McGregor) just talks. The whole month he’s been talking crap. But the talk is over. He says I’m gonna get this guy, I’m gonna kill this guy, but when he gets inside the cage he won’t do anything.”

If that’s the case, then Brandao will have an easy night. And even if it isn’t, he’s determined to leave Ireland not just with a win, but a brighter future than he had last December, one that includes big fights, title shots, and a rematch with an old rival.

“The only thing I want to do is focus on my fight and then I want to get to a title fight,” he said. “And if Poirier gets in my way, he’s gonna go down.”