Diaz on Silva: 'You never know what you're going to get'

Nick Diaz speaks to the press the day after it was announced that he would fight Anderson Silva on January 31... 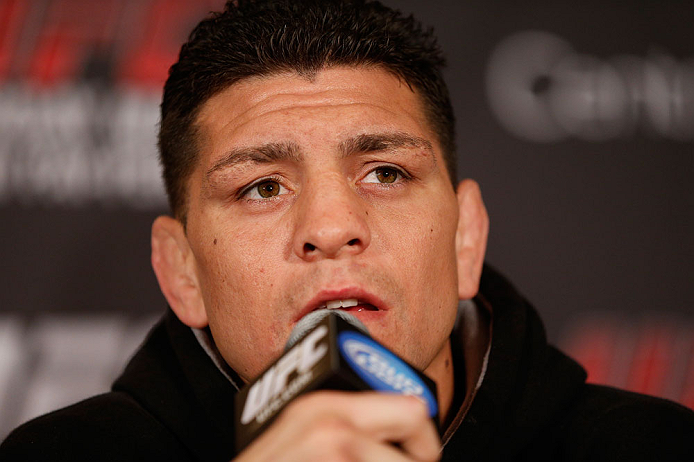 On a Wednesday teleconference with the media, Nick Diaz quoted Forrest Gump and his January 31st opponent Anderson Silva, asked a reporter if he would want to fight “The Spider,” and admitted that he really didn’t enjoy fighting.

In short, it was Nick being Nick, and yes, it’s good to have him back for the first time since his March 13, 2013 bout with Georges St-Pierre.

“It’s been a really productive time off for me, it’s been positive,” said Diaz of the time off from the Octagon. “I wasn’t stressing about taking a fight or having a fight, and that was fine for me. I can survive without fighting. I just want to do the best I can, like everybody else.”

Diaz re-signed with the UFC on July 25th, a deal that begins with his Super Bowl weekend bout against middleweight legend Silva. But as he pointed out during the Wednesday call, it’s not a return from retirement, just from a much-needed break.

“I didn’t really mean to make the statement that I was retired,” he said. “You don’t really retire from martial arts. What I meant to say was that I wasn’t going to take a fight that I wasn’t happy with. I needed to take some time off.”

Silva was that fight, even though the always candid Diaz isn’t exactly looking forward to the night of the event.

“I was looking for the biggest fight I could get myself into,” he said. “That’s what I’ve done since I was 18 years old and I got into the UFC...I don’t enjoy fighting. Definitely not. Would you enjoy fighting Anderson Silva?”

Diaz will make that walk though, just like he has for the last 13 years, ever since his pro debut in August 31. Since then, he has gone from being a gritty Stockton scrapper to one of the elite of the sport, and to think, he’s only 30 years old. So does he see at least five more years battling it out in the Octagon?

“Day by day, fight by fight,” said the non-committal Californian.

What he would expand on is the idea that Silva vs. Diaz is going to be a stand-up showdown between two of the top strikers in the business, making it clear who the boxer was in this equation.

“I can’t say what it (the fight) is gonna be, but as far as boxing, we both have a little bit of experience inside of boxing gyms,” he said. “I think my experience came a little more naturally on account of my surroundings. He’s a kickboxer and has a kickboxing style, and he spent a lot of time in boxing gyms on account of his MMA career.”

So what happens when the bell rings?

“You never know what you’re going to get,” he said. “Life is like a box of chocolates.”

Mr. Gump would be proud. As for dealing with the media once again after a nice break from the spotlight, he just had two words, ones made famous by his future opponent: