Diaz shocks the world, submits McGregor in 2nd round 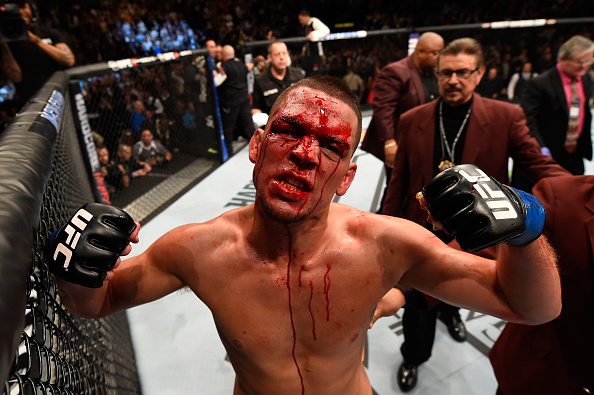 For the better part of two rounds, UFC featherweight champion Conor McGregor looked to be on his way to another spectacular victory in the main event of UFC 196 Saturday, this one in his welterweight debut against Nate Diaz. But the Stockton veteran is built tough, and after getting bloodied and battered, Diaz sprang into action, shocking the MMA world with a second-round submission of the Dublin superstar.

“I’m humble in victory or defeat,” McGregor said. “I took a chance to move up in weight and it didn’t work.”

It looked like it was going to, as McGregor landed with his first punch over the top. But after missing a spinning kick, Diaz was able to pin him to the fence briefly. Once separated, McGregor got right back to work, taunting Diaz in the midst of landing several overhand lefts. As the round progressed, Diaz was able to get some pawing shots in, but they would immediately be answered by McGregor, who was firing with bad intentions throughout, eventually cutting Diaz over the right eye. With 40 seconds left, Diaz dragged the fight to the mat, but McGregor easily reversed position in the ensuing scramble, capping off a dominant round.

Growing more disdainful of Diaz by the second, McGregor continued to rip off quick and accurate punches at his opponent’s bloodied face, and while Diaz still marched forward defiantly, he was unable to match his opponent’s output. Midway through the round though, the Stockton veteran began to tag McGregor with regularity, forcing him to back up for the first time. And as the crowd erupted, it was Diaz suddenly taking control against the fence. With a little over a minute to go, McGregor desperately shot for a takedown, and then it was all Diaz, as he battered the Irishman and then sunk in a rear naked choke, prompting a tap out at the 4:12 mark.