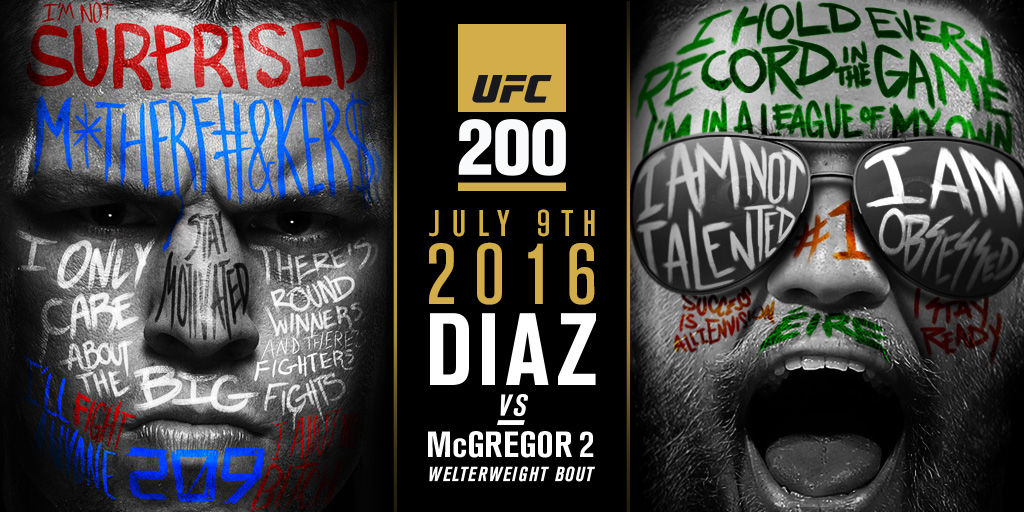 The biggest fight of 2016 thus far is now slated to be the biggest rematch of the year as well, as the UFC announced today that Nate Diaz will once again face Conor McGregor in a five-round welterweight bout that will headline UFC 200 on July 9.

The bout will take place at T-Mobile Arena in Las Vegas as the headline event of the 2016 edition of International Fight Week.

At UFC 196 on March 5, an injury suffered by lightweight champion Rafael Dos Anjos prompted a switch to the evening's main event, with featherweight champion McGregor now moving up to the welterweight division to face late replacement Diaz. What resulted was an exciting back-and-forth battle that saw Ireland's McGregor race out to an early lead before a bloodied Diaz roared back and finished the bout in the second round via rear naked choke. After the first loss of his UFC career, McGregor is hungry for redemption, while Diaz aims to close the book on his rivalry with "The Notorious" one with the entire world watching on July 9.

A proud native of Stockton, California, former Ultimate Fighter winner Diaz, 30, has long been a fan favorite thanks to his exciting style and take no prisoners attitude. An Octagon success at 170 and 155 pounds, Diaz has won three of his last four, and with a second victory over McGregor, the MMA world will be his for the taking.

Dublin's McGregor, 27, has captivated the mixed martial arts world since his UFC debut in 2013, and he ran off seven consecutive victories en route to the undisputed featherweight crown, which he won last December by knocking out Jose Aldo in 13 seconds. Now eager to settle the score with Diaz, McGregor gets his chance to get even on the biggest card in UFC history.