Conor McGregor and Nate Diaz have come to Las Vegas with an army behind them, like generals heading to war.

They have each wielded every tactic, every piece of verbal ammo, with utter precision in the lead-up to their rematch Saturday night. But now the talking has ceased and the battlefield, paved in revenge and validation, waits in the middle of T-Mobile Arena at UFC 202.

When the Octagon door closes this won’t be a war between two nations.It will be a fight between two men. A continuation of sorts from their first battle – a Fight of the Year contender McGregor seemed to be winning until he wasn’t. He said that Diaz knows what happened, that he was winning until he lost.

But the pride of Stockton, Calif. has a different recollection, and thinks that McGregor is only fooling himself.

“He’s either lying to himself or to the world about his confidence. He’s trying to make himself believe it,” Diaz said. “He remembers what happened in the last fight.

“He’s got pictures of me up in his garage with him punching me in the face. What the f*ck? Who does that? He’s trying to hype himself up, but when he goes to sleep he remembers what happened last time.”

Losing didn’t sit well with McGregor. After UFC 196 he escaped with his team to Iceland to go back to basics. The seclusion he needed forced him off UFC 200 because of his absence at the pre-fight press conference. But looking back, he says he received the time necessary to prepare for the fight he feels he needs to win. 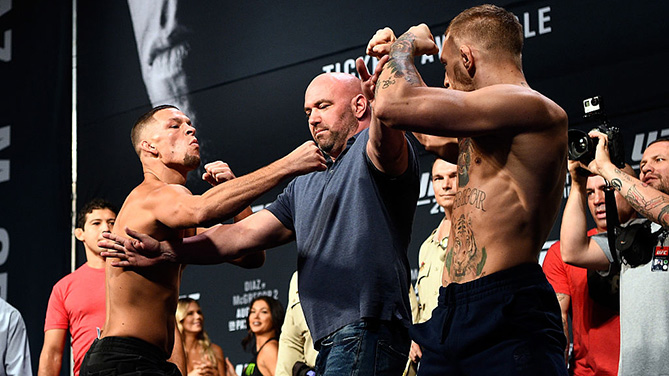 “I got what I had asked for,” he said. “(In the first fight) I didn’t give enough credit to Nate’s durability, his experience. He’s had more UFC fights than I’ve had fights.”

This time McGregor is taking Diaz more seriously than any opponent he’s faced before. He built a gym in the desert of Las Vegas for a specific eight-week fight camp geared specifically for Diaz. There were middleweight training partners and jiu-jitsu black belts at the ready to push McGregor every day.

In the first meeting McGregor didn’t spar a single southpaw for his original opponent, Rafael Dos Anjos. When Diaz stepped in 10 days out, McGregor didn’t account for the factors that came with his new opponent. He ate up to 170 pounds – three weight classes above featherweight, the division he reigns over as champion – and he paid for it.

“This time I’ve been preparing to face a durable, experienced fighter who has the reach, height and the length,” McGregor said. “I feel very confident that we will go in and get this win back. … I’m still going to march forward, press forward and bust him. There will just be a lot more in my tank.”

Not much has changed this time around for Diaz – just a full camp and more rounds. Wherever the fight goes he is confident in his abilities as a mixed martial artist. He’s spent 13 years in the game perfecting his craft and he doesn’t expect McGregor to be able to catch up in just five short months.

“I thought I could beat him the whole time,” Diaz said. “I think he’s a good fighter and a good talker. … That’s no punk-ass compliment either. F*ck him.

“We’re going to have to get in there and see what happens in the fight. That’s what I’m here for and that’s what we’re all here for.”

The melee inside the David Copperfield Theatre at MGM Grand that kickstarted Fight Week may have grabbed all the headlines the past few days, but the hostilities between the camps is irrelevant at UFC 202. Diaz and McGregor will look more like a scene out of Gladiator than Braveheart on Saturday night.

And if it’s anything like the first one, you’re not going to want to miss it.