"We train to fight for real and I think these other guys are trying to
figure out ways to fight around fighting to win the rounds." - Nate Diaz 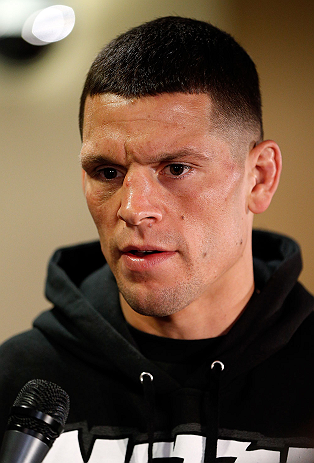 Nate Diaz already had his exit strategy in mind as he paced the floor of his room. Back and forth, back and forth.

“What the hell am I doing here?” said the 21-year-old, locked away in a house in Las Vegas with 15 of his MMA peers competing on the fifth season of the reality series The Ultimate Fighter in 2007.

“I was considering leaving that night,” recalled Diaz, who only had seven pro fights at the time, but when those seven fights included bouts with the likes of Koji Oishi, Joe Hurley, and Hermes Franca, it was likely that his call to the UFC was going to come sooner rather than later.

But after a WEC loss to Franca in 2006, Diaz was approached to compete on TUF 5, and surprisingly – at least to Diaz – his brother Nick and coach Cesar Gracie were all for the idea.

“Me and my brother would sit home and make fun of it,” said Diaz. “And then my brother’s like, ‘yeah, you should go.’”

Diaz laughs, but it was no laughing matter more than six years ago. He stayed that night, but expected to walk off the next day. But then he was told by his team that he was going to fight, and Diaz decided to stay for that bout against Robert Emerson and then leave.

“I said I can’t leave now, they want me to fight this guy,” he said. “So I stuck around, and a week went by, the slowest, longest week of my life. I fought Robert Emerson and I was in a good mood, and it was less stressful. So I said I’ll stick around for a couple days.”

A couple days turned into six weeks, and after it was all over, Diaz defeated Manny Gamburyan for the TUF 5 season title and a UFC contract.

“It accidentally became a career,” said Diaz, 28, a veteran of 18 UFC bouts. On Saturday, the Stockton native continues that accidental career against a gentleman who shared the whole reality series experience with him in Gray Maynard. On TUF, Diaz submitted the former Michigan State University wrestler in the semifinals. In 2010, Maynard evened the score with a close split decision win. This weekend in Vegas, they settle the score, even if Diaz believes there’s nothing really to settle.

“I won the first fight and I thought I won the last fight,” he said. “(After the fight) I remember winning then seeing that I lost.”

For Diaz, it’s a familiar refrain, one that he and his brother share. The way they see it, if you beat them on points, it’s usually not because they lost, but because they ran out of time. So don’t talk about decisions with Nate or Nick; they’re not big fans of the 10 point must scoring system, or scoring systems at all.

“Gray, to me, isn’t that entertaining of a fighter, and I think I’m the better fighter,” said Diaz. “He might be better at playing the game and winning the game, but as far as fighting’s concerned, I think I’m better than Gray. He hits hard, he wrestles hard, and he’s a good athlete. He’s definitely a tough fighter, but he’s nothing I haven’t dealt with before because this will be the third fight. And everyone’s dangerous in this sport, and especially for three five-minute rounds. If there was no time limit or rounds, I’d beat everybody because there would be no rush. That’s the dangerous part, not necessarily him, but the 15 minutes to go a hundred miles an hour.”

Diaz means it too. He’s as old school as it gets, and we’re not even talking Royce Gracie in UFC 1 old school, but guys showing up to challenge Rorion Gracie in his garage old school. Sure, mixed martial arts becoming a sanctioned and legitimate sport has been great for the careers of fighters like Diaz, but if you think he wished he was fighting in the early 90s, that would probably be accurate.

Obviously, that’s not the case though, and on Saturday he’ll have to deal with the rules he’s been dealt. As such, he’s still ready to go as he looks to rebound from and April loss to Josh Thomson.

“My mission is always to win, and finishing is my first objective,” he said. “I’m out there to finish the fight always, and I’m training hard to get the job done. We train to fight for real and I think these other guys are trying to figure out ways to fight around fighting to win the rounds.”

He clearly points such comments in Maynard’s direction, but Diaz isn’t too kind either when it comes to the man who just beat him – Thomson – as well as UFC lightweight champion Anthony Pettis.

“These guys fight once a year,” said Diaz of the two, who have both been plagued with injuries over the years. “They sound good for the camera, and I think all this time they’re taking off they’re spending a lot of time practicing their camera skills. The way they do things really gets on my nerves lately and I’m the only one out here active and I don’t feel I get the credit I deserve for it. I have more fights than most of the people in the UFC, so I want to fight these dudes who are getting all the credit.”

First up is Maynard.

“I’m more of a martial artist than him,” said Diaz. “I think he’s more of an athlete than me. So as far as fighting’s concerned, I think I’m a better fighter than him. I think I’ve fought better competition and finished off better people than he has. It’s gonna be tough, so let’s go out there and see what happens. I’m here to finish, to take him out and don’t get taken out.”

“I think if I beat him I’m gonna hunt down Pettis and Thomson and take them out.”