Diana Belbiţă Is Ready To Shine

Romania's Own Diana Belbiţă Ready To Show Her Potential
By Miguel Navarro, on Twitter: @migsnavarro15 • Feb. 18, 2022

“It’s nice to be in the UFC. It’s a dream of probably all the MMA fighters. But to win a fight in the UFC is something different.”

Strawweight Diana Belbiţă couldn’t have described the importance of a win in the UFC better. The amount of sacrifice and pressure that goes into one fight can’t be overstated. For weeks and months on end, the men and women competing in the UFC are pushing their bodies to new limits while trying to become the best mixed martial artist they can. All for just 15-25 minutes of competition.

In a sport that seems to be evolving more with each day, that task is no easy feat. While her first two bouts inside the Octagon didn’t go as planned, the Romanian-born prospect was able to finally bask in the glory of her first UFC win after defeating Hannah Goldy in July 2021.

“After the first two fights, I was so mad every time. I felt that pressure, like, ‘Oh, I have to win the other one. I have to win the next one.’ But this time I’m so relaxed, so happy, and I can’t wait to really enjoy fighting.”

While Belbiţă was trying to secure her first Octagon win, she was honest with herself and knew she was possibly fighting to keep her spot on the roster. “I was in the cage and said, ‘I must leave everything (here). Because if not, this could be the last chance.’ Now I’m here, and I’m looking for the next win.”

Now that she has her first win in the books, Belbiţă feels like that weight has finally been lifted. No longer fighting with that pressure, the 25-year-old is more than ready to step back in the Octagon. And because she knows in order to keep her spot and prove that she’ll be a contender one day, she’ll have to become a complete mixed martial artist to do so.

On the regional circuit, Belbiţă had a successful run where she won her last four fights by either submission or knockout before signing with the UFC in 2019. Belbiţă knows what she is capable of, she just needed time to adjust and feel comfortable. Now that she has that, she will be entering her next fight this weekend against Gloria de Paula confident and, more importantly, calm. 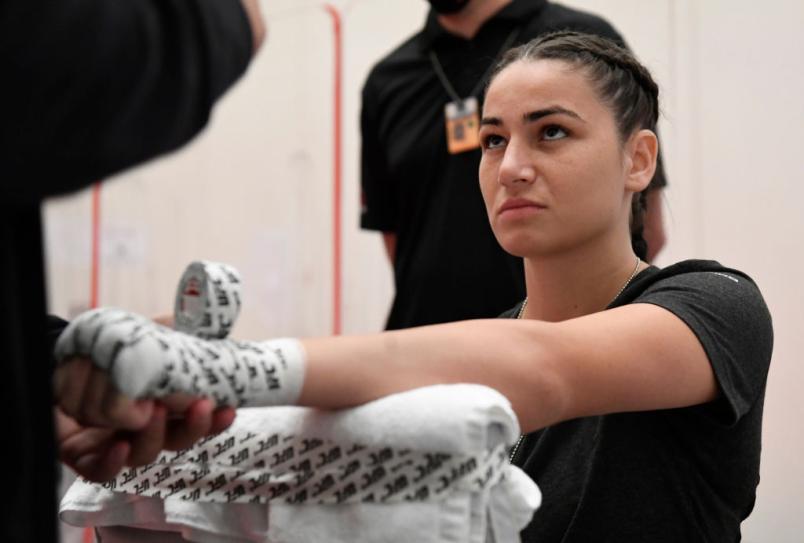 Diana Belbita of Romania has her hands wrapped prior to her fight during the UFC Fight Night event inside Flash Forum on UFC Fight Island on July 16, 2020 in Yas Island, Abu Dhabi, United Arab Emirates. (Photo by Mike Roach/Zuffa LLC via Getty Images)

For Belbiţă, the most valuable thing she learned in her last fight was to really believe in what she was capable of. The moment will present itself; you just have to be patient and seize your chance when you have it. Belbiţă will have to wait for that moment again, as she looks to establish her first winning streak inside the Octagon.

“Last fight, I learned I can do everything I want if I work enough for that. This is a huge lesson. Not just for me or just for my team, but for everybody. You can do absolutely everything you want if you work for that.”

Going into Saturday and feeling no pressure, Belbiţă feels even more confident that she can control wherever the fight goes. With six knockouts and four submissions, she has shown that she can be a threat with her striking or grappling. While she may not be the biggest fan of wrestling, that doesn’t stop her from training in the art and having the cardio to do so if need be.

“I’m sure she has good hands,” she said of de Paula. “So, I hope she wants to meet me in the middle of the cage because that’s where I want to fight. Saturday will be simple; I will go there, hit hard, and be ready for absolutely everything, because I expect her to shoot, I expect her to want me on the ground. Everybody wants me on the ground because they expect me to not know how to work on the ground. Guess what, if I don’t like to hug people, that doesn’t mean I don’t train for that. So, I’ll be ready for that. I will step in the cage, and I will hit hard.” 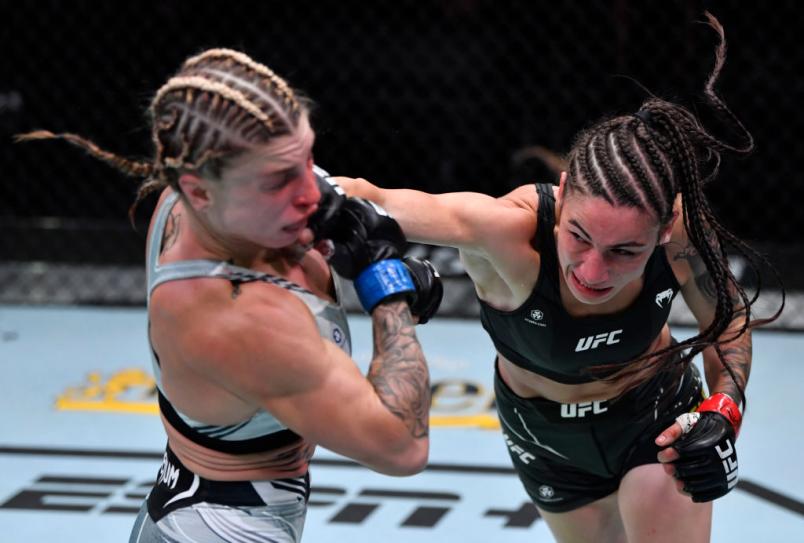 Unsuccessful in her last two bouts, de Paula is in the same boat Belbiţă found herself in last year. Knowing what it’s like to feel that pressure of potentially losing your spot, Belbiţă is expecting the Brazilian to bring that same intensity she brought to get her first win inside the Octagon.

While Belbiţă may not be a name in the rankings just yet, with a win on Saturday, she hopes to show her division that she is finally here.

“I just want them to know I’m here. I’m not here by mistake. I deserve my spot here, and I worked hard for that spot.”