Diakiese wants more than to make a living in UFC, he wants a belt

Most people go to Florida for sun, sand, and maybe a little trip to Disney World. British lightweight prospect Marc Diakiese goes there to fight.

“I have it pretty tough here every day,” he said of life at the American Top Team gym in Coconut Creek. “I’m sparring with the guy fighting Gunnar Nelson (Santiago Ponzinibbio) and people like Will Brooks, and they’re heavier so they’re putting a lot of pressure on me. But I’m holding my own, so I’m pretty confident that it’s good to have these guys in the gym to make me better.”

It’s a long way from Doncaster for the 24-year-old, but once a TKO win over Lukasz Sajewski last October turned into three UFC wins in rapid-fire fashion, ambitions changed for the “Bonecrusher,” and before his last fight against Teemu Packalen in March, he decided to pack his bags and make his way to the United States.

“My mindset changed,” he said. “I wanted to make a living and fight in the UFC, but when I got there, my mind changed and I wanted to be a champion. So when that happened, making the move here was pretty easy because I feel for me to make progress, I needed to be somewhere like this.”

The results of his first camp with ATT were immediate and emphatic, as he knocked out Packalen in just 30 seconds. This time around, as he prepares for a July 7 meeting with fellow unbeaten up and comer Drakkar Klose, he feels more relaxed and established in the gym, and as the wins pile up, those new goals become even clearer.

“After my first fight, it just felt like I was meant to do this,” he said. “I know how to win, and I feel this is what I was supposed to do. And it’s become a lot easier because it’s a goal now. Even beyond winning a title, I want to prove to everybody that I can do this. I’m having fun and I feel like I’m on the playground right now.”

It’s scary that someone so deadly with his hands and feet could be having so much fun. Through his first three UFC fights, it’s almost as if he’s playing a video game and he took over the other guy’s controller. When asked if this was an accurate description, he laughs.

“If I said no, I’d be lying. As a young lad, if I was in a street fight and I lost that fight, I’d get dragged back to fight the guy again. So I’m used to fighting. But now I’m getting paid for it, I’m getting more attention, and I’m trained by the best team in the world, so I’m having fun with it. People take it too seriously. But to me, I put my work in the gym and go on fight. It’s fun.” 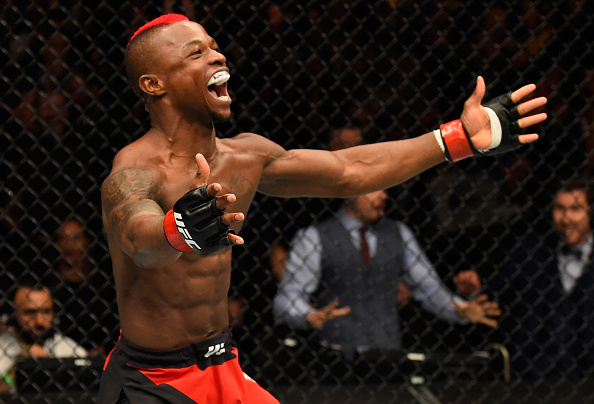 You can almost see Diakiese’s smile through the phone lines, and it’s clear why he’s become such a popular figure in the UFC in a little less than nine months. He’s got charisma and he knocks people out. What a combination. But as he explains, it’s when he decided to let people see his personality that everything clicked.

“Before, when I fought in other promotions, I tried a little bit hard to be professional and it didn’t work out because I was putting it on,” he said. “When I went back to the old me, where I just say what I feel like saying, it worked out for me. I notice a lot of the fighters in the UFC are trying to be like Conor (McGregor) and they’re forcing it. Just fight and be you. I’m saying what I feel like saying, I’m not forcing anything, and I’m just being me and going to fight. A lot of people seem to think I’m talking s**t, but I’m not. I’m just saying what I want to do in there.”

So, since he mentioned it, what’s the plan for July 7 in Las Vegas?

“I feel he (Klose) is very vulnerable, and he’ll be lucky to go past the first round,” Diakiese said. “I know he’s going to be looking very, very hard for takedowns, and I’m looking forward to that, so I think by the second it will be done.”

Yeah, people like that kind of stuff. And now Diakiese knows it as he soars up the 155-pound ladder at a speed that is even causing him to take notice of.

“I always believed in myself and that I would make it into the UFC, but I didn’t expect it to be this fast,” he said. “Things are going so fast and I can’t believe it. Everybody seems to be noticing who I am now, and it’s just unreal.”