Di Chirico: 'A fighter is a normal person with an abnormal will' 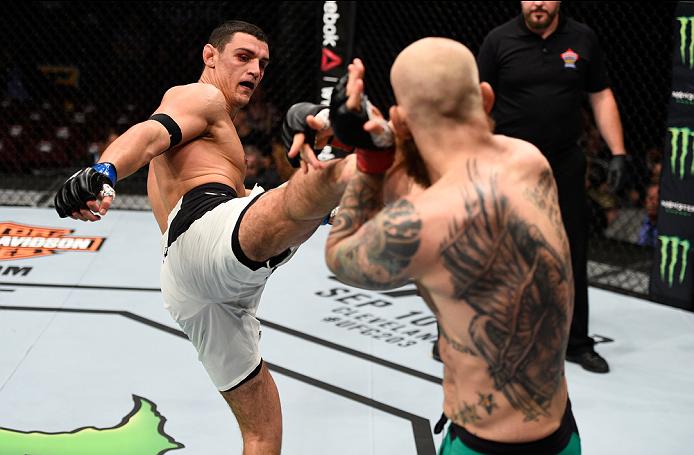 Meryl Streep probably didn’t expect a firestorm like this. But when the award-winning actress took the stage at the Golden Globe Awards on Jan. 8 and said, “So Hollywood is crawling with outsiders and foreigners. And if we kick them all out you’ll have nothing to watch but football and mixed martial arts, which are not the arts,” the MMA community came out in force to defend their sport.

But it was an Italian mixed martial artist who also played American football back home in Rome that addressed the comments the best.

“Meryl Streep made a great speech during the Golden Globe ceremony, but I think she got carried away when she made that summary and hostile comment,” Alessio Di Chirico said. “There was something contradictory and wrong in her words. Above all, because on the UFC's roster, like in other MMA promotions, there are a lot of foreigners, and the promotion also supports pioneering projects about women in MMA. And at last, I come from Rome, where you can feel art in every corner but, as my art teacher always said to me, ‘You can never have the presumption to say what is art and what is not.’”

How do you say “mic drop” in Italian?

Sure, Di Chirico may never get to express those feelings personally to Ms. Streep, but what he can do in the meantime is continue to carry himself like a professional and an ambassador of the sport while its detractors fade into the background. It’s an important task for all fighters, but especially for ones like the 27-year-old Di Chirico, who is part of a small, but distinguished, group representing their country around the world.
RELATED CONTENT: Fighter bio | Matchup with Eric Spicely

To some, that would be a daunting prospect, but Di Chirico has never shied away from taking the road less traveled. Just look back at his pre-UFC history, where he was in Italy competing as an American football player.

“In Italy, there is no money around American football, but a lot of passion,” he said. “I really miss that sport and also my team. I think there are so many different people on an American football team that it looks like a small society. There are different roles and there are a lot of differences between the players: there is the overweight guy like the lineman, the skinny guys like the backfield players, the small guy like the running back, all of them obviously with the right proportions as professional athletes.”

In other words, it’s a melting pot, just like MMA, where all shapes, sizes, nationalities, races and genders train together and then go compete for the same goal – to win. But in MMA, Di Chirico doesn’t have a team full of players going into battle with him. On fight night, he’s on his own, and with a 10-1 record thus far, he’s figured out that part just fine.

Doing it in the UFC can be a tougher task though, with the competition level higher and the removal of a local comfort zone also playing a part. In his first Octagon bout in April of last year, Di Chirico lost a close decision to Bojan 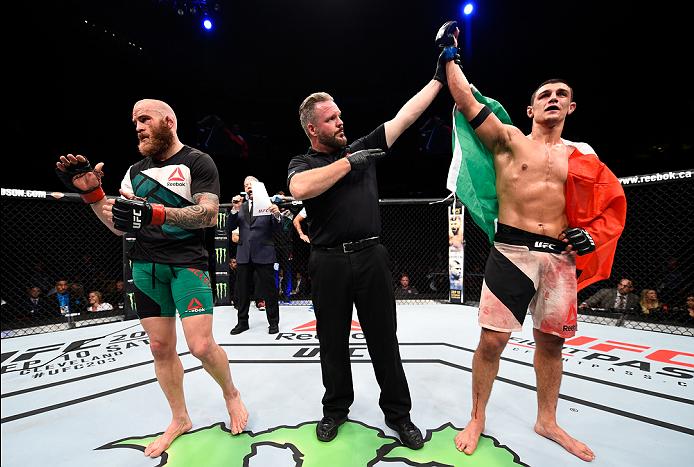 Velickovic. But four months later, he got his hand raised, defeating Garreth McLellan.

“I felt like I've got a weight off my chest, but I think it is just the first step of my career,” Di Chirico said of the victory, which he chalks up to the experience he picked up in his bout against Velickovic. “You win or you learn, and I learned a lot after that (first UFC) fight.”

Now he will take the lessons from both fights into Denver to face Eric Spicely on Saturday. This is his second consecutive bout in North America, and he trained in Florida with American Top Team this time around, so getting used to fighting in the States won’t be an issue. But it’s important that he keeps his focus right as he battles the underrated Spicely, who scored one of the biggest upsets of 2016 when he finished Thiago Santos in a single round.

“I think he is a good submission artist and also an elusive striker,” Di Chirico said of his foe. “The difficult part will be putting pressure on him and, in the meantime, not letting him get the distance for the takedown. But focus is the most important thing in the sport; winning or losing depends on that. It's everything.”

See Meryl, it’s a sport and an art, with strategy, technique, and all those things a flippant remark couldn’t possibly explain away. And as far as those comments chasing away a young man like Alessio Di Chirico, no chance. He’s just getting started in 2017.

“The fans can expect to see me being myself, like always,” he said of his plans for the year. “I’m not fake, not a superstar, just a man that will push forward to his limits because I think that a fighter is a normal person with an abnormal will.”
Save
Save
Save
Save