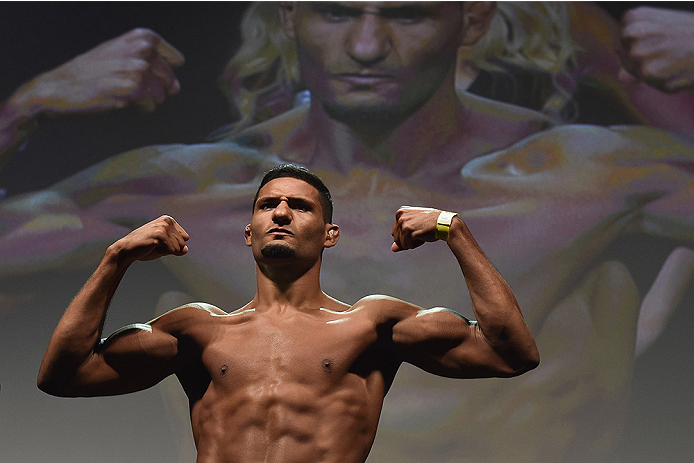 When Eddie Gordon needed just 71 seconds to defeat Dhiego Lima in the Ultimate Fighter 19 finale in July, it was assumed that “Truck” was just too big for Lima, who had fought his first 10 pro fights at the 170-pound weight limit. But as far as the Goiana, Brazil native is concerned, it wasn’t necessarily the weight that got him, but the wait.

“We left the (TUF) house, we came home, and then boom, eight months later I'm getting my first UFC fight and there's all this pressure,” he said. “I really wasn't ready for that. The wait killed it. Waiting eight months, knowing I was in the finals, I kept getting hurt in camp because I was training so hard and I wanted to win so much. But it's the past now.”

It is, and tonight Lima gets a fresh start when he faces late replacement opponent Jorge de Oliveira on the UFC Fight Night card in Uberlandia. It will be a new look Lima, at least for UFC fans, as he returns to the welterweight division, something he knew going into the reality competition in late-2013.

Size didn’t seem to be an issue for Lima, who decisioned Adam Stroup and submitted Tim Williams and Roger Zapata en route to the finals. Gordon had his number on fight night in Las Vegas in July, but the 6-foot-2 Lima – who says he usually walks around at 205 pounds – didn’t feel like he gave away much, if anything, fighting at middleweight.

“I'm long and I've got skinny legs,” he laughs. “I don't have enough legs for 185, that's the problem. But I actually don't think I gave away much. Strength wise, I used to play football and I was a noseguard. I went against guys 300 pounds, 250 pounds, so strength wasn't a problem and I don't think I gave a lot away. The big factor was my eating. I felt like I could eat anything I wanted to and I would still make weight easily, and that mentality was horrible. I don't know why I did that, but you live and learn.”

It’s a luxury few fighters have these days, being able to take weight cutting out of the equation, and Lima admits that he took full advantage of that luxury and paid for it

“At 185 I wasn't worried about making weight, so that made my nutrition bad,” he said. “I kept getting sick and it was just a bad camp because I wasn't eating right. I wasn't eating anything bad, but I wasn't getting enough nutrients. I was like ‘I don't need vegetables, I can make weight.’ (Laughs) That played a big part. But now I'm as healthy as I can be. I haven't gotten sick once. It's amazing what nutrition can do.”

Having made weight yesterday in Uberlandia, now all he has to do is fight, though that prospect got a wrench thrown into the works when original opponent Pawel Pawlak withdrew due to injury. In steps striking specialist de Oliveira, but Lima isn’t too bothered by the late switch.

“There was so much pressure there for the fight in July,” Lima explains. “Now, I'm just relieved. I'm more relaxed now, there's no pressure, I can do my job and I don't have to worry about anything and I think that's going to make me perform so much better.”

Not even fighting in Brazil for the first time has the current resident of Atlanta, Georgia stressed out. Maybe knowing that much of his family will be at a cousin’s wedding today has eased the nerves, but in reality, the 25-year-old is simply focused on the fight.

“Of course I'm real excited about fighting there, but at the end of the day, I'm not really looking at it like that,” he said. “I'm just looking at getting my first UFC win. Once I get in there, it's me and him in the UFC cage. It doesn't matter where that cage is, I just want to perform. I want to get my first UFC win, and that's what I'll be looking to do. There are really no emotions, I'm just so ready. I've been training real hard, and I don't care where it is. I'm excited it's in Brazil of course, but this fight could have been in Japan, it could have been in Africa; wherever it was, I'm just looking to get in there and get my first win.”

And get started on the next chapter of his career.

“TUF is the past now,” Lima said. “It was awesome, I got to the finals and wished I won the whole thing, but it's a fresh start now. Pretty much, my UFC career begins here. I want to get that first win and go from there.”