After a few trails and tribulations, Dhiego Lima feels nothing but positive vibes heading into his showdown against Luke Jumeau at UFC 243.
By Thomas Gerbasi, on Twitter: @TGerbasi • Oct. 2, 2019

Dhiego Lima may be the most positive person in mixed martial arts, and while he chuckles at such a description, he doesn’t deny it either.

Such an attitude may be the byproduct of a two-fight winning streak (his first as a UFC fighter), and his spot on the UFC 243 main card this weekend against Luke Jumeau. And those good things don’t hurt, but for the Goiania, Brazil native, it started way before his back-to-back wins over Chad Laprise and Court McGee.

More than four years ago, to be exact. Back in the summer of 2015, Lima, a former hotshot on the regional fight scene, had made it to the UFC after earning a spot in the Ultimate Fighter 19 finals. He lost that final bout to Eddie Gordon, and while he rebounded with a win over Jorge de Oliveira, consecutive defeats at the hands of Tim Means and Li Jingliang got him released from the promotion. By then, it wasn’t easy to keep a smile on his face.

“It was hard to stay positive,” Lima admits. “That (fighting in the UFC) was my dream and I wanted to be there but, at the same time, I just needed rest. The first time when everything happened, I was so burned out that I needed some time. I took a year off, enjoyed my family, enjoyed my kids and I trained for fun and to learn instead of fight camp, fight camp, fight camp. Then when I started again, I got a little winning streak going.”

In June 2016, Lima defeated David Michaud for the Titan FC title, but six months later he lost it to Jason Jackson. He could have descended into a dark hole, but he didn’t. And that positive outlook provided some rewards, as he soon got a text about going back on The Ultimate Fighter for the Redemption season in 2017.

“When you’re a positive person you attract positivity. And that’s how I live my life.”

Again, Lima made it to the TUF finals, and again, he lost, this time to Jesse Taylor. A defeat at the hands of Yushin Okami followed, and suddenly, the Georgia resident was 1-5 in the UFC, seemingly unable to put anything together with those three letters on his gloves.

Hoping to get one more shot in the Octagon, Lima reflected back on the changes he made in his life a couple years prior, and it kept him motivated that he would get another fight.

“I gave my life to Christ two years ago and I’ve been sober for two and half years,” he said. “No drinking, nothing. I wasn’t an alcoholic, but I used to drink a lot, having beers watching football, and once I turned my life to Christ all around, it became even easier. I’ve been the happiest I’ve ever been in my life.” 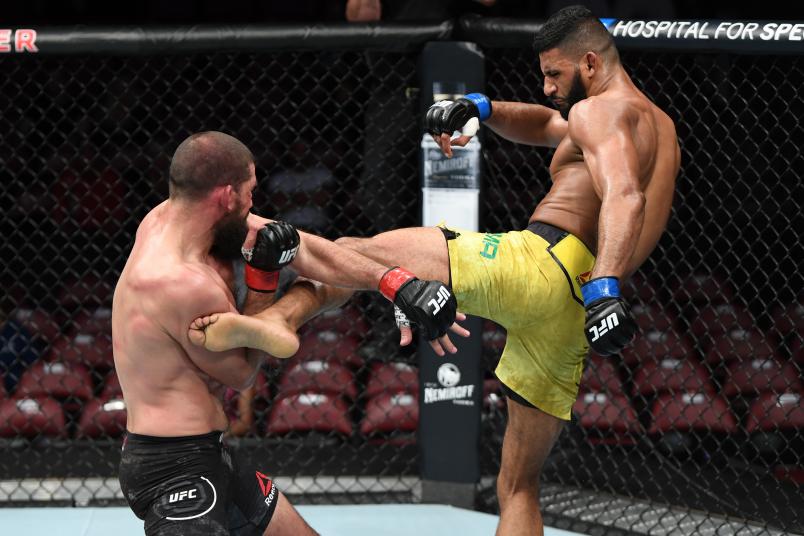 He’s also been a better fighter than ever before, as he delivered a highlight reel knockout of Laprise last December and then gutted out a split decision victory over McGee in April.

And here he is.

“It was all to get where I am today,” Lima said. “The past is the past and the future’s bright. I’m just excited.”

Even if he’s going to get booed this weekend when he meets New Zealand’s Jumeau?

Nope, no negativity at all. Now we know why Dhiego Lima is always smiling.

“It’s all timing,” said the 30-year-old welterweight. “I needed to go through that and it’s all good now. When you hit your prime, a lot of people think it’s just physical, but the mental part is very important. So I feel like I’m hitting my prime everywhere. It’s time to make a run.”