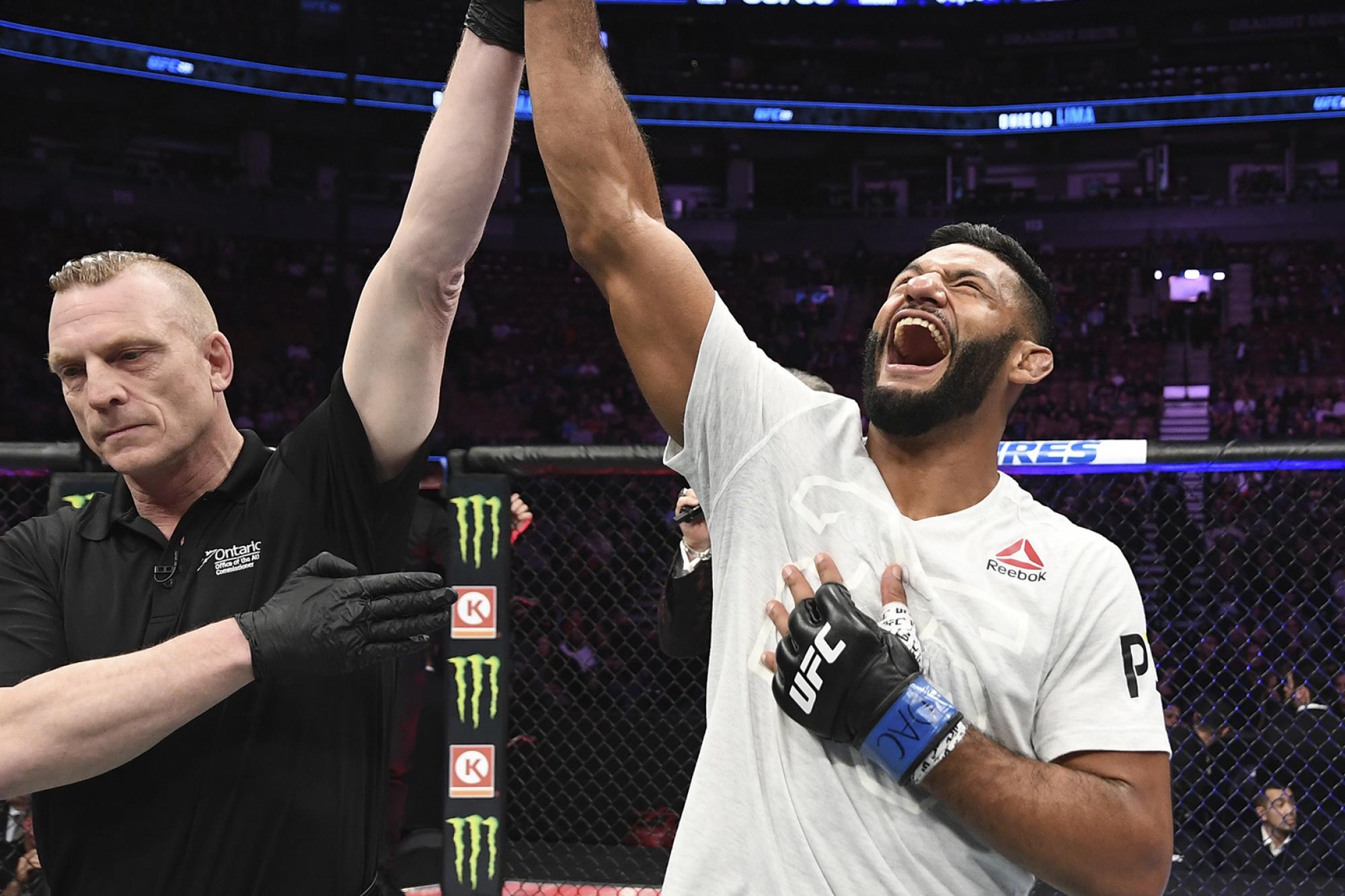 Dhiego Lima Is All Smiles

Heading Into UFC Fort Lauderdale, Lima Can't Help But Be Excited For His Match-Up With Court McGee
By Zac Pacleb • Apr. 25, 2019

The happy demeanor Dhiego Lima carries with him into a room isn’t unexpected. In fact, it’s pretty par for the course. With that said, it seems like an extra sense of relief is piggybacking that usual joy.

It makes sense considering his last fight ended in a first-round KO over Chad Laprise at UFC 231, his UFC first win since November 2014.

Lima called the win a “big monkey” off his back and a well-earned sense of relief. Since that last UFC win, he fought in Legacy FC and Titan FC before finding himself back in the TUF house for The Ultimate Fighter: Redemption. Despite that winding road back to the winner’s circle, Lima said he didn’t try to change how he approached the game.

“I never did anything different, even when I lost,” Lima said. “It’s just God’s timing, and I believe that for me, and it was all an experience. Here, up, down, up down, and I’m just enjoying the moment.”

Approaching this fight with Court McGee at UFC Fort Lauderdale, Lima said there’s less pressure to win and “just excitement.” He added, however, that he’ll need to have a little bit more of an intense warm-up before he and Mcgee open the show at BB&T Center.

“I can’t approach this fight calmly,” Lima said. “I’m usually a guy – I’m very technical. I bring the fight, but I’m very technical as well, so I see first. I see my openings and everything, and with Court, there’s none of that. He shoots out of the cannon when the bell rings, and he comes after you.”

While Lima isn’t really banking on any certain type of fight going down, he knows McGee is going to throw down once they touch gloves.

“I don’t know what’s going to happen,” he said. “All I know is I’m going to bring the fight, and I can piece him up for 15 minutes. If I land something, he’s there to hit. You watch all his fights, I don’t think there’s one fight where he’s not bleeding, so he’s a guy who doesn’t mind getting hit.”

About five months ago, Lima felt like he had his back against the wall in terms of his UFC career. Desperate for a win, his left-hook knockout freed him of the pressure, and it’s clear Lima is ready to have fun once he walks into the Octagon. Although he isn’t looking past Mcgee, now that he’s confident he has a future in the UFC, he does have a plan.

“One step at a time, one win at a time, make a good run. Eventually, I’ll be right there, be in the top-10, fight for a belt. That’s my future. That’s what I want to do in my life, and I’m working very hard for it. I really am.”