Devonte Smith: "There was no doubt I was gonna get the contract" 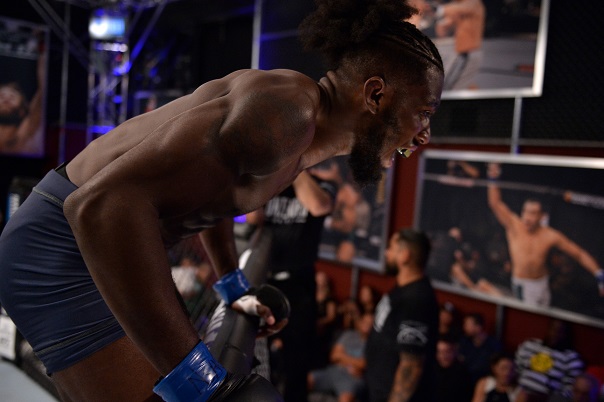 Devonte Smith celebrates after his knockout victory over Joseph Lowry in their lightweight fight during Dana White's Tuesday Night Contender Series at the TUF Gym on August 7, 2018 in Las Vegas, Nevada. (Photo by Chris Unger/DWTNCS LLC)" align="center" />
It’s a week after Devonte Smith became a UFC fighter, and he’s finally getting a little downtime to play Fortnite with his niece and relax. For now. But not for long.

“I think a flaw of mine is that I tend to look towards the next thing,” Smith said. “My mom was actually talking to me and trying to teach me to enjoy the process and enjoy the work. I tend to go, ‘All right, cool, I won, that was a good feeling. Now time for the next one.’ (Laughs) I’m always pushing forward and I want the next opponent. And I’m real big into manifestation, so after I got that win, it really felt like I was gonna get it. There was no doubt in my mind I was gonna win and get that contract. It’s like I’ve been there already because I think about it all the time.”

It took Smith less than three minutes to remove Joe Lowry from the ranks of the unbeaten on the August 7 edition of Dana White’s Tuesday Night Contender Series and join the UFC’s lightweight roster, but the journey started long before that night in Las Vegas.

“It only took me 11 years, but finally, I made it,” he laughs. “It was a great feeling all around, and I’m still feeling good about it.”

He should, because getting this contract not only means he gets to fight against the best of the best in the Octagon, but he gets the security he fought hard to get. How hard? Here’s an excerpt from his bio form in which he describes his previous job:

“I was a CDL (Commercial Driver’s License) holder, so I drove semi trucks that carried construction material around Ohio, but I had to take the material off the truck manually. I carried dry wall, mud, steel, ceiling tiles, concrete, etc. up and down stairs. Then after a 10-12 hour shift I would go to practice.”

I remind him of this (not that he needs reminders), and wonder if wanting to get out of that job and into the UFC pushed him on those rough days in practice.

“Anybody who’s been in the struggle will feel that way,” he said. “I had to because of the situation I was in, but now I can concentrate on one thing without the thoughts of the struggle. I had to work that job and I still needed to go to practice. It was something I had to do. Now I need to concentrate on myself and make smart moves.”

The biggest move the 25-year-old Ohio native has made recently is going to Englewood, Colorado to train with Marc Montoya and the Factory X squad. By doing so, he planted roots with a quality team after a long spell of being a man without a steady training home.

“I went for a week to see how the team was organized,” said Smith, who visited Colorado a couple weeks after knocking out UFC vet Justin Edwards in 90 seconds in March, lifting his pro record to 7-1. “I didn’t have a gym of my own for about a year and some change, so I was training at different gyms.”

Once there, he got the answer he needed almost immediately.

“I loved my time out there,” he said. “Everybody was super nice and super caring, there was a lot of knowledge, and I felt no egos out there. It was different. I told the coach I wanted to make that my home gym and he said he’d love for me to be on the team. Then I got the call (for the Lowry bout) and I went out there for close to two months and trained until it was fight time.”

Needless to say, Smith will be back.

“It’s like my home away from home, and it’s stress-free,” he said. “I concentrate on fighting instead of stupid stuff popping up because I’m home.”

Colorado has been a perfect fit for the lightweight prospect. But make no mistake about it, Ohio will always be home, and a place that has informed who he is as a fighter.

“It’s about mental toughness,” he said. “A lot of stuff happens out here, and for my reality and the way my life was coming up, it was crazy, but it wasn’t crazy. Having parents that don’t sugarcoat anything, you learn a lot of things at a young age and you tend to notice stuff. But you learn to take that stuff and keep moving forward. I’ve been through a lot and it’s all about mental toughness and you keep moving forward. That’s my state and Cleveland is my city.”