A Much Needed Break From Training Has Devonte Smith Revitalized, Focused And Ready To Leave His Mark On UFC Fight Night: Santos vs Walker
By THOMAS GERBASI, ON TWITTER @TGERBASI • Sep. 30, 2021

It was a triumphant return for Devonte Smith in February, as he came back from a year-and-a-half layoff, personal tragedy and his first UFC defeat to stop Justin Jaynes in two rounds.

The hype train surrounding “King Kage” was on track again, and it was assumed that the Ohio native was going to strike while the iron was hot and get back in the Octagon as soon as possible.

“I'm good,” Smith laughed, as he prepared for Saturday’s follow-up to the Jaynes fight against Jamie Mullarkey. There were no social media posts looking for a fight, no middle of the night phone calls to his manager Jason House doing the same thing. Instead, Smith went home after the Jaynes fight and stayed there until he got the call for Mullarkey, prompting a trip back to Colorado for training camp.

“I was gone for so long,” said Smith. “Two, three months is a long time to be away from your family, especially when it's not just the adults, it's the kids, too. The kids grow faster than the adults, so you're missing out.”

The kids’ part of it has taken on new meaning for Uncle Devonte since his sister Dariene’s tragic murder in July 2020. As soon as a stray bullet took her life, Smith now was more than just an uncle to her kids, and that’s a role he takes very seriously, and one he got to embrace after his last fight, even if he did miss his seven-year-old niece’s first (and maybe last) rollercoaster ride. 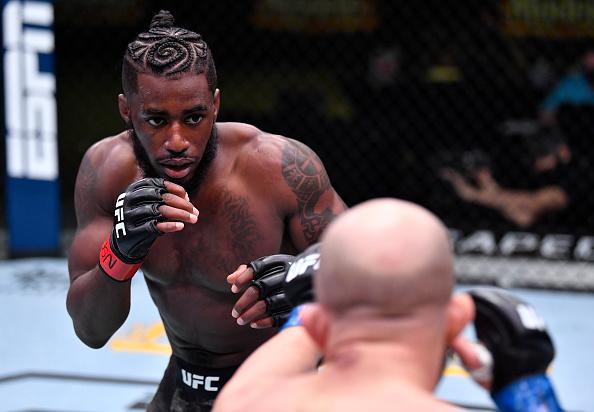 “The ups, the downs, the neutral, it really was good being home because I got to learn their personalities so I can better assist them as they get older,” he said. “Right from wrong, understanding their personalities. My niece, she's quiet, but she's smart and sneaky at the same time. (Laughs) My nephew, he's real happy, just a really happy boy.”

You can hear Uncle Devonte beam when he talks about the kids, and even though it was soon back to work to get ready for his fifth Octagon appearance, Smith left Cleveland satisfied and both eager to get to the Factory X gym and eager to return to his family.

“Even when I leave Colorado to go back to Cleveland, I have a bittersweet feel,” he said. “But when I leave my family, it's very depressing. Oh my gosh, it is so depressing. Everybody in the house is super sad. The last time, I had to be like, 'Hey y'all, we gotta chill with this. We gotta take the music up, we gotta take the energy up. I'm only going out to train.’ But that's why I'm excited to get in, get out, get this win and go home.”

That’s not to say it’s all roses at home, as a seven-year-old and a three-year-old can be a handful. Smith laughs in agreement.

“Sometimes, you just need a break,” he said. “You can get burnt out dealing with so many things, and sometimes you just need a reset. And Colorado is that for me. It's nothing but fighting, eating, and sleeping. That's all I'm doing. It puts me on a schedule. I grow from the separation.” 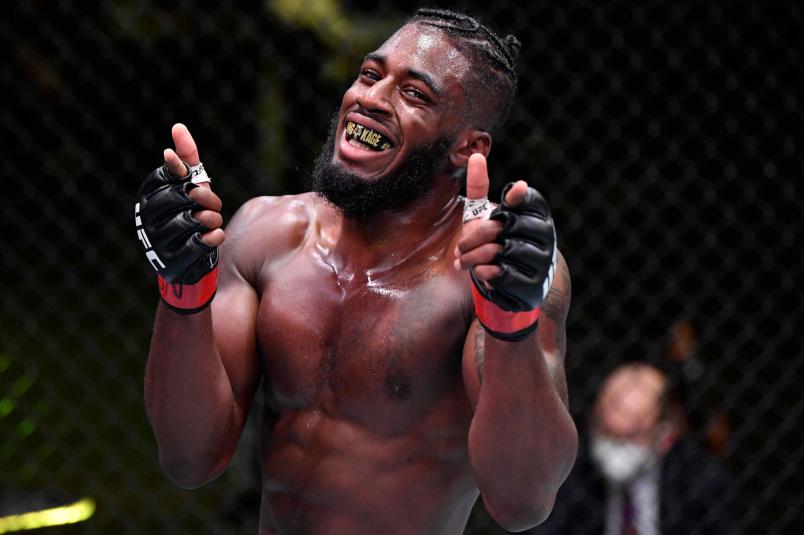 Devonte Smith reacts after his victory over Justin Jaynes in their 160-pound catchweight fight during the UFC Fight Night event at UFC APEX on February 06, 2021 in Las Vegas, Nevada. (Photo by Chris Unger/Zuffa LLC)

Devonte Smith reacts after his victory over Justin Jaynes in their 160-pound catchweight fight during the UFC Fight Night event at UFC APEX on February 06, 2021 in Las Vegas, Nevada. (Photo by Chris Unger/Zuffa LLC)

That’s a lot of wisdom to fit in just 28 years on this planet. Most fighters his age would have been looking for the next fight and the next knockout, determined to make up for lost time. Smith, on the other hand, has learned about the important things in life and he’s intent on taking full advantage of them. He wasn’t born like that, but he’s glad he got that knowledge before it was too late.

“I used to mess up by following my emotions,” Smith said. “Not saying that's a bad thing, but for certain situations, it is. I was that fighter, to a certain extent, that wanted to, in some ways, get back in there. But I've seen how that can either benefit or not benefit them. And a lot of times, when you go back in there, let's say off of a loss, you need to work on what you need to work on. When you just go off emotion - I'm mad I lost, I could have won that fight, it was just jitters, this and that or that or this - you go in there and you didn't really get that much better. Now you're just training to fight; you're not training to get better. Off of a win, it's a little different, but you gotta really put in the numbers, and you're working out two, three months straight, sometimes even longer, to go super hard for 15 to 25 minutes. So even when you win, your body needs to heal; it needs to sit down.

“I broke my hand two, three times, ruptured my Achilles, got my nose broke, messed up my ankle - just so many battle scars,” he continues. “I've been doing this for ten-plus years, and even at 28, I just feel like I'm at a place where it's like, ahhhhh, I'm cool. I'm going to become champion, and I'm going to just move at my pace. If I feel like it makes sense that I can do two, three, four, five times in a year, then I'll do it. But if it don't make sense to me, if I'm not feeling good, I'm cool. I'd rather take care of my life and make sure my body's good so I can go in there and perform so I can get the win. And as long as I win, that's all that matters.”

Devonte Smith isn’t just here to fight. He’s here to make his mark, not just for himself, but for that happy nephew and smart niece who will never get on a rollercoaster again. And he’s going to do it his way. Does that mean he’s not invested because he’s not thinking about this 24/7? Absolutely not. In fact, this last little break may have made him more invested than ever.

“It helped me re-find that love for MMA,” Smith said. “Now I have a balance.”