The 'Detroit Superstar' Firing On All Cylinders 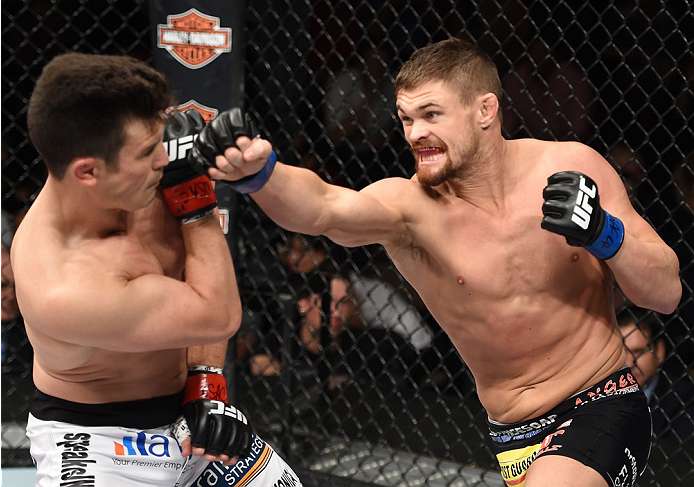 Daron “Detroit Superstar” Cruickshank understands the fight business as well as any veteran in the game, and coming into his UFC 185 bout against Jiu-Jitsu specialist Beneil Dariush, his outlook is all confidence in both his fight game and his showmanship.

Indeed, Cruickshank has much to already be proud of. And even though the wily veteran got off to a rough start when he competed on The Ultimate Fighter 15 in March 2012, these days he’s hit his stride and is running at full speed in his chosen profession.

“The last two years have been a learning and growing experience,” he said. “I had a lot of hopes when I got on the TUF show. I won my fight to get into the house but I got knocked out in my second fight, so I had to learn that I’m not invincible. I had a lot of growing up to do, but through all of it I learned that I belong here. Now when I go into a fight I know what I can do, and I know that there’s nothing I haven’t seen yet.”

That’s the kind of attitude that fighters will tell you gives one the confidence to excel as a professional mixed martial artist. We hear all the time how fighting is 90 percent mental, and once the psyche is conditioned to control the fear of the unknown, that’s a good spot to be in.

With more than twice as many fights as Dariush, and already having gone through two surgeries, one for a gruesomely broken nose after fighting John Makdessi and then eye surgery after being poked by KJ Noons in his last fight, Cruickshank is perhaps light years ahead of Dariush in the mind game.

But with three wins in his first four UFC fights, the Iranian fighting out of Yorba Linda, California is no one to sleep on.

“He’s got a decent record, and he’s predominantly known for his grappling,” Cruickshank says. “But the guys I train with know him pretty well from their jiu-jitsu tournaments and training, so that was some pretty good insight for me. I’ll put it this way, anything he can do isn’t anything I’ve never seen before.”

Cruickshank has been a fighter his whole life. Both of his parents are martial artists, and his mother is a former kickboxer who was trained by his father, who owned his own Tae Kwon Do school, so fighting is inherent in Cruickshank. And while coming from a traditional martial arts upbringing, he isn’t stuck in the conventional traditional training mindset most martial artists have.

“I started in Tae Kwon Do and I wrestled all through high school and college, but I’ve dabbled in a little bit of everything, kind of Jeet Kune Do style,” he said. “Before I was in the UFC I had a lot of power and knocked out a lot of people, but I was simply a kicker. I was throwing my hands just so I could kick people. Now I’ve really worked on my boxing and hand speed and the power I can put into my hands, so now I’m dangerous from kicking and from punching range and that’s a good place to be on my feet.”