Tim Elliott made it clear from the start that he wasn’t too interested in competing on season 24 of The Ultimate Fighter. And after six weeks in Las Vegas, where he won the series’ Tournament of Champions and earned a shot at the UFC flyweight title held by Demetrious Johnson this Friday night, you might say the Wichita native is sticking to his guns.

No, they couldn’t have. In a world unlike that of boxing, where there are at least four “world” titles in a seemingly endless list of weight classes, there’s only one flyweight title in the UFC, and Elliott is getting a crack at winning it. That’s the glass half-full approach. The glass half-empty scenario is that the 29-year-old’s first UFC fight since February of 2015 is against the best fighter in the world, pound-for-pound, and the only champion the UFC’s 125-pound division has had.

But like Han Solo, never tell Elliott the odds because he feels that he’s not only ready for this fight but that he can win it.

“I knew that I could compete with these guys and I knew that if I stuck with it and kept trying that I would have the opportunity,” he said. “The problem is that I kind of screwed myself. When I first got signed to the UFC, I was a little green. I felt like I had great fights against (John) Dodson and Joe B (Benavidez) and (Ali) Bagautinov, but I really wasn’t ready. I wasn’t prepared to fight top-level guys. I held my own, but that’s not enough to win. And now I’m at a point where I feel like I’ve tightened up those things that I didn’t have before. I used to be just wild and awkward and that’s really all I had. But now I have some technique, I have some experience, and I think that I’m ready.”
ELLIOTT TALKS ABOUT MATCHUP WITH DEMETRIOUS JOHNSON ON FACEBOOK LIVE

Since his first run in the Octagon from 2012 to 2015, where he went 2-4 in six fights, Elliott won three straight in the Titan FC promotion where he became champion. That momentum carried into TUF 24, where he won four fights over Charlie Alaniz, Matt Schnell, Eric Shelton and Hiromasa Ogikubo. Not bad for a guy who didn’t want to be there, but it was the idea of losing early in the competition and having to stick around for the rest of the six weeks of taping that may have pushed him to new heights.

“I tried not to think too much about the winning and the losing, but honestly, if I would have lost a fight early on or even if I lost a fight toward the end, I don’t think I would have stayed in the house,” he said. “I think I would have left right away. (When on the show) I really was just trying to focus on keeping my weight right and my health up to date, and then let the fighting take care of itself.” 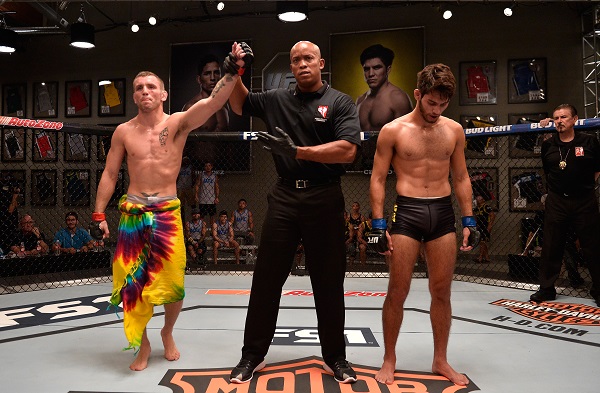 So there could have been footage of Elliott trying to hop a wall in the middle of the night if he lost? He laughs at such a suggestion, but also points out that his coach on the show, former opponent Joseph Benavidez, and the rest of Benavidez’ staff kept him focused on the prize at the end of the arduous tournament.

“I don’t think I could have stayed,” Elliott said. “I wouldn’t have had it in me to stick around. It was hard for me to stick around even when I was winning. I was tired of the weight cutting, I was run down, I was missing my family and I was lucky enough to have quality guys in my corner that didn’t let me think about it. And not only that, they pushed that completely out of my mind. A big part of me finishing was having the coaching staff that I had.”

Elliott did finish, making weight four times and winning four fights to get to the biggest fight of his career. That’s a victory in itself, but Elliott isn’t too content with just getting to the big show again. He wants to make a mark – not only at 125 pounds, but perhaps even at 135 pounds.

“The cutting of weight is getting harder the older I get, my daughter’s getting old enough to where she’s starting to see things and learn things and I don’t want my family to see me suffer,” Elliott said. “Before when I was making weight, nobody ever got to see it except my coaches and my team, and I don’t want my family to see me that way. I feel like ‘35 is where I’m gonna end up at. If everything plays out right, I’ll kick Demetrious Johnson’s ass and then I’ll vacate the belt and go up to ‘35 and I’d like to challenge Dominick Cruz or Cody Garbrandt at that weight.”