"This fight has all the ingredients to be one of the best fights of all-time." - Anderson Silva

Anderson Silva didn’t become someone considered by most to be the greatest mixed martial artist of all-time by following the pack or thinking like everyone else. That single-minded pursuit of a goal can leave hurt feelings along the way, particularly among those closest to the Brazilian icon.

So while the 39-year-old Silva had no doubt in his mind that he was going to return to the Octagon after suffering a broken leg in his December 2013 bout against Chris Weidman, telling his wife Dayane and their five children may have been tougher than any rehab he was about to go through.

“To tell you the truth, they are not too happy,” said Silva on a Friday teleconference with the media to discuss his return against Nick Diaz on January 31. “But they respect my wish, and now they’re coping with it.

“I don’t think anybody’s family would like to see them going to war, and with mine, it wouldn’t be different.”

In Silva’s defense, his storied career has shown that if there is something remarkable or otherworldly to be done in the fight game, he’s the one to do it, and taking a comeback fight that will occur less than three months before his 40th birthday is just the kind of challenge the Brazilian icon craves.

And leave it to Silva to not just come back from injury to face a top-level opponent, but one like Stockton’s Diaz, a longtime welterweight contender and former Strikeforce champion who has long been one of the most intriguing figures in the fight game, albeit one Silva never thought he

“I’ve been paying attention to all the best fighters in the UFC but I never thought that in my career I would face Nick Diaz,” he said. “But I’ve watched all his fights, and I know his style really well. He’s got great jiu-jitsu and this fight has all the ingredients to be one of the best fights of all-time.”

He may be right. Both fighters have a style that is conducive to a memorable five-rounder, and though Diaz was non-committal, Silva did hint that this will be a matchup fought solely on the feet.

“I believe it’s going to be one of the best stand-up battles of the UFC,” said the former middleweight champion, who has scored 22 of his 33 wins by knockout.

But in the all the excitement of Silva’s return, the question is, what does he have left at 39? Some have written off his two losses to Weidman, saying the first one happened because Silva dropped his hands and got caught, while dismissing the second due to the broken leg that ended the bout. So to his diehard followers, he’s only picking up where he left off. That may be the case, but what of the left leg he broke when Weidman checked a kick in round two?

“I have been doing a lot of physical therapy, and right now it’s at 95 percent and improving,” said Silva, who has been posting videos on social media of his training. “On the day of the fight it will be 100 percent.”

Sometimes believing is half the battle. The rest comes down to skill and heart, and Anderson Silva has never come up short on either attribute. Now it’s just a matter of where he goes from here, and in true Silva fashion, he’s not ruling out a return to the top of the middleweight mountain. 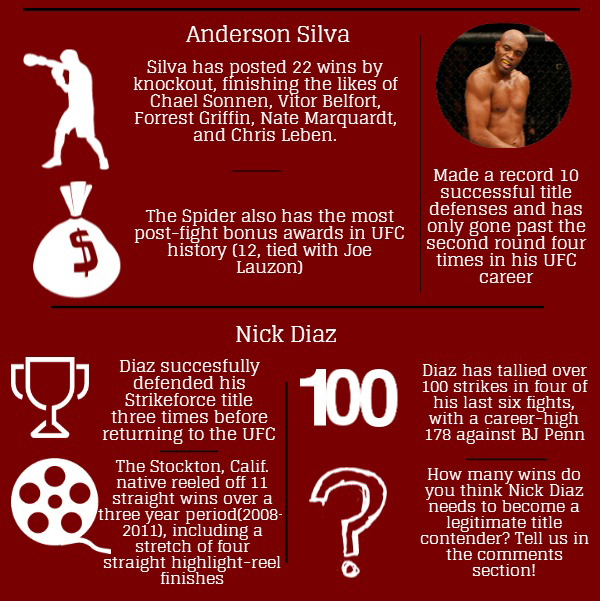