Despite epic past fights, Choi promises '100 times more' for Stephens

Dooho Choi talks a lot about his fans. And while he has proven accessible to his growing group of followers, the greatest gift he could give them was delivered in December 2016, when he and Cub Swanson put on what was widely accepted as the Fight of the Year. 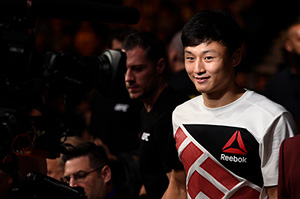 Choi didn’t get the win that night in Toronto, but no one who saw those 15 minutes of fistic fury will ever forget it. “The Korean Superboy” won’t either, as he’s nearly had it on a loop in the ensuing year.

“I watched the fight many times and studied it a lot,” Choi said through a translator. “I think this fight took me to the next level of myself.”

That could be bad news for the man he faces Sunday in St. Louis, Jeremy Stephens, and for the rest of the featherweight division, but at the moment, the 26-year-old from Busan is simply focused on making sure that we do see that next level and that the 2018 version we see of him is the best one.

“All I think about was my last fight against Swanson,” said Choi, who has been on the sidelines since that bout. “I am not gonna say I regret the last fight, but I should have prepared more. Before the Swanson fight, I usually tried to enjoy the fight when I am in the Octagon; now I want to one hundred percent concentrate on each second when I am in the Octagon so whenever I look back in the future, I can feel great about it.”

He has no reason to hang his head for such an epic performance, but there were holes in his game to be addressed, and he’s had the time to do that, despite having some injuries that kept him out of action for all of 2017. And in a rarity for a day and age in which out of sight means out of mind, Choi has remained on the radar of fight fans, a fact that he appreciates while he dealt with a tough year.

“I feel very sorry for my fans because so many people looked forward to my fights,” said Choi, who did get a rousing reception during a visit to Las Vegas for UFC 219 last month.

“I go to Las Vegas often, but this time was the best,” he said. “I was so happy to be around great fans.” 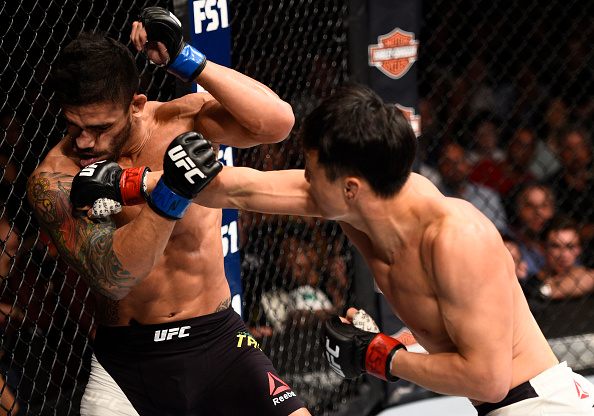 Choi will see plenty of them this weekend, and despite being in his first UFC main event and emerging as the face of South Korean MMA, this baby-faced assassin isn’t blinking.

“I don’t have much pressure,” he said. “There are many great fighters like me (in South Korea). They will come soon. Time will tell. I am honored to be a main event fighter in the first UFC of the year. I was away from the Octagon for a long time and I will show a hundred times more impressive performance to the fans.”

That’s quite a gauntlet to throw down, but given the styles of Choi and Stephens, it’s not out of the realm of possibility, especially with both possessing the power that can end a fight with one swing.

“He has been in the UFC for a long time and is a very tough fighter,” Choi said of Stephens. “Everyone in the UFC will have a hard time when they face him.”

Will Choi fall into that category? According to the “Korean Superboy,” not if he lands first.

“Once my knuckles hit him in the face, he will decide to be a wrestler.”