Two Of The Game's Most Beloved Big Men Prepare To Meet Saturday In Houston
By E. Spencer Kyte, on Twitter @SpencerKyte • Feb. 11, 2022

While all eyes will be on the main event on Saturday night in Houston, the hearts of the fans in attendance at Toyota Center belong to one half of the night’s co-main event.

Derrick Lewis has become Houston’s favorite fighting son, and this weekend, “Tops Drop” will once again bump throughout the arena as “The Black Beast” makes the walk to the Octagon, eager to build off his year-end win over Chris Daukaus and vindicate himself after landing on the wrong side of the results the last time he competed at home.

There is no way to predict what Tai Tuivasa is going to walk out to this weekend, as he’s strolled to the cage singing along to Spice Girls, Aqua, and Celine Dion over the course of his UFC career. What is guaranteed, however, is that the big kid from West Sydney will be looking to hand Lewis a second straight loss in his city, and that Saturday’s penultimate pairing carries a great deal of significance in the heavyweight division.

“Yeah, it’s a big fight in the division,” UFC President Dana White said at Wednesday UFC 271 Press Conference when asked if the co-main event combatants were battling for a place in the championship tier in the division. “Derrick is ranked No. 3 and obviously he wants to hold that position, and Tai is ranked No. 11.

“It’s a big fight in the heavyweight division.”

It’s a big fight for both men, as well.

Lewis, who holds the record for the most knockouts in UFC history, has been a fixture in the Top 5 for the last several years, serving as that top-line hurdle championship hopefuls need to clear should they want to enter the title conversation.

And more often than not, Lewis has dispatched those types, building an 8-3 record over his last 11 fights where two of the three losses came in championship fights.

If there is a knock on the beloved joker with the gravely baritone, it’s that he’s come up short in the biggest moments of his career, falling to Daniel Cormier when the two battled for the heavyweight title at UFC 230 in New York City, and suffering a third-round stoppage loss to Ciryl Gane in an interim title bout last summer in Houston, where the local standout admitted the pressures and rigors of headlining a championship fight at home got to him.

But losing to Cormier and Gane is something 31 of a possible 34 opponents between them have done, so to hold that against Lewis, who has already rebounded with a record-setting first-round stoppage win over Daukaus, feels like it would be trying too hard to find fault with the punishing finisher. 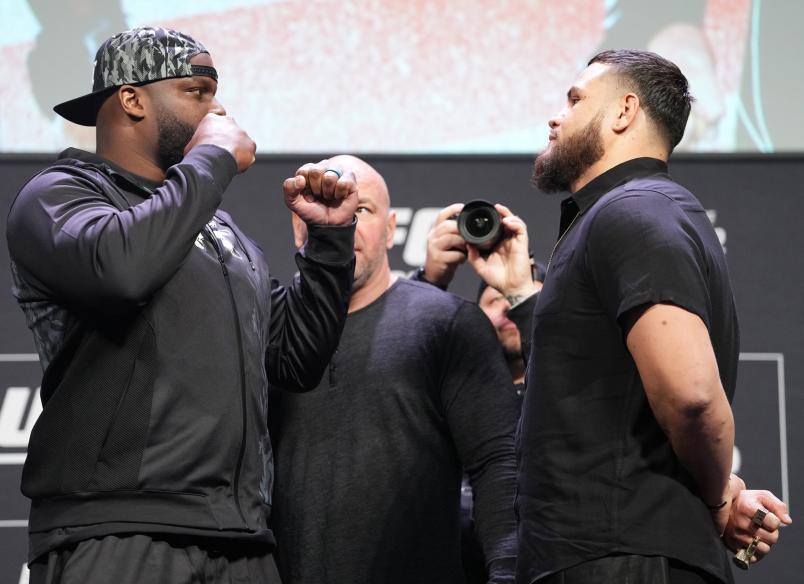 Derrick Lewis and Tai Tuivasa of Australia face off during the UFC 271 press conference at George R. Brown Convention Center on February 10, 2022 in Houston, Texas. (Photo by Josh Hedges/Zuffa LLC)

For Tuivasa, this is a second chance to take a major step forward in the division, but the first since the 28-year-old Australian started truly dedicating himself to his craft.

“Bam Bam” burst onto the scene with three wins in eight months beginning in November 2017, pushing his record to 8-0 and earning his third straight UFC triumph with a decision victory over Andrei Arlovski at UFC 225 in Chicago. The victory carried him into the rankings and gave him a ton of momentum, but Tuivasa couldn’t navigate the subsequent step up in competition.

A matchup with Junior Dos Santos resulted in the first loss of his career, and a meeting with Blagoy Ivanov seven months later produced a second consecutive setback. He was paired off with Serghei Spivac in the middle bout on the main card the night Israel Adesanya and Robert Whittaker met for the first time at UFC 243 in Melbourne, and came away with a third straight loss after getting submitted midway through the second round.

Tuivasa took a year off to reassess and make wholesale changes, committing himself to training and giving himself the best opportunity to maximize his considerable talents, and the results have been outstanding. After getting back into the win column in the fall of 2020 with a knockout win over Stefan Struve, the streaking powerhouse posted a trio of stoppage wins in 2021, culminating with a second-round knockout over Augusto Sakai in December.

This weekend, it’s just like White said — Tuivasa is gunning for Lewis’ spot in the pecking order, and the UFC’s preeminent knockout artist has no intentions of giving it up without a fight.

Each man understands the assignment and how this one is likely to end, and neither seemed all that interested in deviating from what they’re known for or what is expected of them when they step into the Octagon with one another on Saturday night.

“Probably not, but that excites me,” Tuivasa said, when asked if he thinks the fight makes it out of the first round. “It’s either going to be my head or his head.

“We entertain the fans, so we’re coming here to take heads off; that’s it.”

Lewis echoed those sentiments, leading to the two all but agreeing to throw caution to the wind and come out guns blazing this weekend.

“I’m coming to do the same thing, brah,” responded the Australian.

“Let’s swang-and-bang then!” boomed Lewis, drawing an enthusiastic “Let’s Go!” from his opponent.

Enjoy the walkouts, because they’re bound to be terrific, and don’t be surprised if the introductions last longer than the fight because these fellas are coming to throw down and have already accepted that the night might be a short one.