Derrick Lewis Reflects On His Journey To The Top

“To go from (being locked up) to getting out and being on top of the world in this sport and the position I’m in now is unexplainable; it’s so crazy.”
By E. Spencer Kyte, on Twitter @SpencerKyte • Feb. 5, 2020

The loudest cheer on Saturday night at UFC 247 likely won’t be for flyweight queen Valentina Shevchenko or light heavyweight champ Jon Jones. Instead, it will come at the start of the main card when Houston’s favorite fighter, Derrick Lewis, pushes through the curtain and makes the walk to the Octagon to square off with veteran Ilir Latifi.

I was in the building at UFC 192, the last time Lewis competed inside the Toyota Center, and I recall the roar that carried him to the cage, but that was when the soft-spoken heavyweight was still just starting to make a name for himself.

Five years later, the humble knockout artist and social media joker has emerged as one of the most beloved athletes on the UFC roster and a respected, cherished, and celebrated member of the community, which should result in a deafening ovation filling the home of the NBA’s Houston Rockets on Saturday night.

It’s a reality that Lewis still can’t quite comprehend given that his early years in the city were some of the worst of his life.

“I can’t express it at all because it’s the same city where I was locked up for doing my worst, being in the worst situation you can possibly think of,” he said of the love and admiration he receives in the city he’s called home since his early teenage years.

Lewis was born in New Orleans, the second oldest of seven, and relocated to Houston with his family in 1999. His mother was in an abusive relationship, and starting over in a different state seemed like the only way out. The violence he saw at home and his inability to do anything about it filled an adolescent Lewis with anger, but when you’re young and comfortable in your surroundings, the idea of being uprooted and having to start again somewhere new and strange rarely sits well either.

The street fighting that started in New Orleans continued in Houston, with bad decisions leading Lewis down a dangerous path. Two weeks after graduating from high school, a late-night altercation resulted in Lewis being charged with aggravated assault and being placed on probation. Two years later, while at Kilgore College on a football scholarship, the explosive heavyweight athlete violated his probation and was sentenced to five years in prison.

He spent the next three-and-a-half years incarcerated, logging most of his time in the Central Unit in neighboring Sugar Land.

“If I didn’t go through that situation, I would never be the person that I am today or the fighter that I am today,” said Lewis, who began his fighting career nearly 10 years ago and has gone 13-5 during the course of his nearly seven-year, 18-fight UFC run.

Looking back, the quiet heavyweight acknowledges that being denied parole and forced to spend more time in that environment was ultimately a positive thing, as it forced him to address the anger he carried inside and decide whether he wanted to spend the remainder of his life as a member of the prison population.

“I grew up without a father and I didn’t know what being a man was all about,” said Lewis, a proud father of three. “I went through that situation that I went through and it taught me how to look at life a whole different way, to appreciate a lot of different things.

“I’m not a people person — I like to be by myself — and being around all those people all the time, making all the noise, I hated it. As soon as one person makes trouble, they were trying to punish all of us. Being around other men like that and getting talked to crazy, getting talked to disrespectfully, doing the same thing every day, the same routine every day — the food, not being able to do what you want — I told myself I was never going to go through that again.”

Upon getting released, the initial interest he had in boxing as a teenager transitioned to a focus on mixed martial arts, but not for the reasons many ascribe to individuals chasing a dream of competing in the UFC.

“I can’t get a real, decent-paying job like everyone else,” said Lewis, whose record significantly limited his employment opportunities, “but now I’m living the lifestyle that I always wanted as a little kid.

It’s that drive to provide his family with a life he could only imagine during his own childhood and the athletic talents that initially had him envisioning a career on the gridiron that have led to Lewis becoming one of the most exciting and popular competitors on the UFC roster.

Standing six-foot-three and weighing close to the heavyweight limit of 265 pounds, Lewis is an imposing figure. While he’s surprisingly nimble and quick for a man of his size, it’s the true one-shot power he carries in the lunchboxes attached to the end of his arms that have made him a feared opponent and beloved fan favorite.

As much as fans and observers talk about competitors shifting the direction of a bout with a single well-placed punch, few genuinely can and even fewer ever do, but Lewis is an outlier in that regard. Numerous times throughout his UFC run, he’s gone from being down on the cards to performing his signature “silverback victory celebration” in the center of the cage after finding a home for a fight-changing bomb.

What’s even more intriguing heading into this weekend’s hometown clash with Latifi is that up to this point, Lewis has never really been operating at 100 percent.

“The thing about it is that I never was full-strength; I was always injured,” said Lewis, who spent four years competing on a balky knee that required surgery following his loss to Junior Dos Santos last March. “I’m better than the fighter I was last fight and better than I’ve ever been because I have been putting in more hours in the gym and it helped tremendously.”

Though he’s known for his quick, deadpan comedic stylings and self-deprecating assessment of his training habits, the truth is that Lewis was limited in what he could do in the gym throughout his ascent into the Top 5 in the UFC heavyweight division.

“I really was only training maybe 30 minutes, an hour every day (before having surgery),” he said. “A lot of guys don’t believe that, but if you watch my fights, you can tell because I was gassed out in the first round.

“Now I want to prove to everyone that they haven’t seen the best of me.” 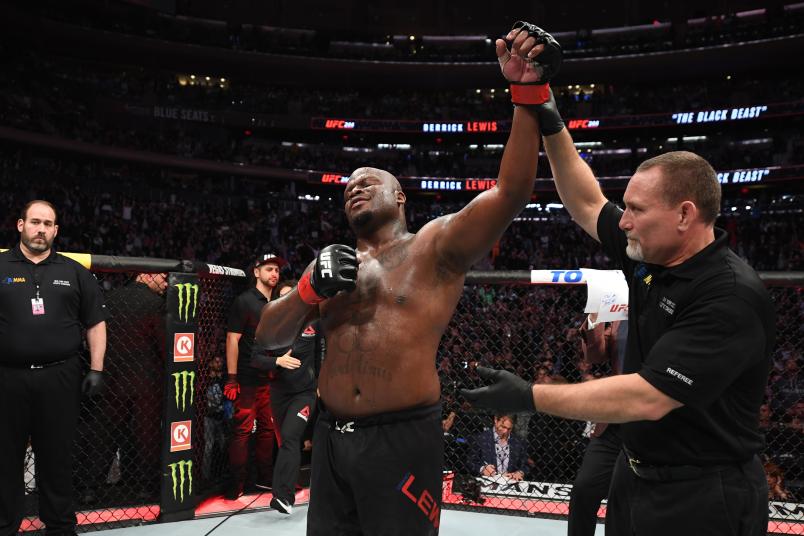 Derrick Lewis celebrates his victory over Blagoy Ivanov of Bulgaria in their heavyweight bout during the UFC 244 event at Madison Square Garden on November 02, 2019 in New York City. (Photo by Josh Hedges/Zuffa LLC via Getty Images)

After returning to the cage and snapping a two-fight slide with a win over Blagoy Ivanov in early November, that mission to showcase his full potential continues this weekend against Latifi at the Toyota Center, where the loud and proud partisan fans in attendance will shower the humble heavyweight with affection as he marches to the Octagon.

“To go from (being locked up) to getting out and being on top of the world in this sport and the position I’m in now is unexplainable; it’s so crazy,” said Lewis. “It’s like a high.

“I promise you — my life right now is one of the reasons why I don’t get high, because just me thinking about my bad situations to where I’m at now is enough of a high. It don’t feel real.”

But it is and it’s why the city of Houston and so many others are always going to be rooting for Derrick Lewis.