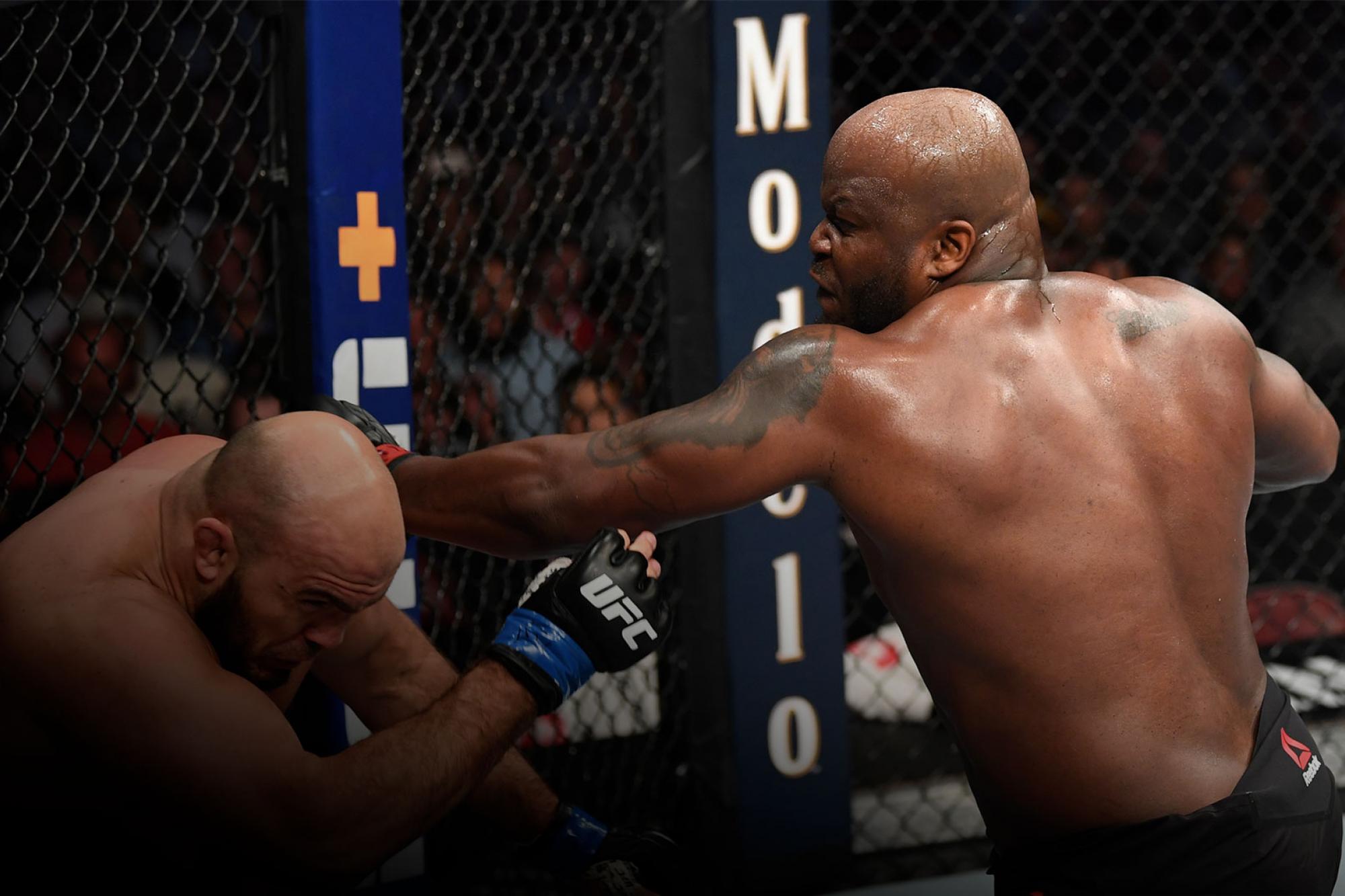 Derrick Lewis has plenty of impressive showings against top fighters in the Octagon, but now he feels better than ever
By E. Spencer Kyte, on Twitter @SpencerKyte • Aug. 7, 2020

Derrick Lewis is 14-5 inside the UFC Octagon.

He’s challenged for the heavyweight title, scored a handful of dramatic come-from-behind knockouts, and has maintained a place of residence in the Top 10 for the last five years. Since the start of 2018, the 35-year-old Houston resident has gone 5-2 with victories over Francis Ngannou, Alexander Volkov, and Blagoy Ivanov, and his losses coming to Daniel Cormier in a championship main event at UFC 230 and Junior Dos Santos four months later in a bout that earned Fight of the Night honors.

The quiet, yet charismatic heavyweight has done all of this while never really competing at full strength, but as he readies to return to the cage this weekend in another headlining assignment opposite Aleksei Oleinik, “The Black Beast” is feeling better than ever.

“I’ve never felt this good before,” Lewis said in his deep baritone. “I know you hear fighters say that all the time, but I really do. I’m feeling good. I feel like a new person

While Lewis has been a must-follow on Instagram thanks to his affinity for memes, self-deprecation, and all things NSFW over the years, anyone who has been checking his timeline lately has seen how the heavyweight’s commitment to a healthier lifestyle resulted in a slimmed down and tucked up Texan turning up in Las Vegas to compete this weekend.

It’s a process that began following his loss to Dos Santos, when Lewis opted to finally have surgery to repair the mangled knee ligaments he’d been fighting with for several years. Moving around the cage on a bad knee contributed to the chronic back issues that plagued him during that time as well, and with both cleared up, the veteran was looking forward to finally operating at 100 percent for the first time in his career.

But following his last victory over Ilir Latifi, Lewis let it be known that he was dealing with additional health issues, though he refused to go into detail about what was ailing him.

He described the situation as “life and death” and noted that he dealt with a flare up of the mysterious condition during his bout with the Swedish veteran at home in Houston in February, though now it’s under control and not an issue that will affect his fighting career.

“I still can’t talk about it, but that’s one of the reasons why I’m trying to stay as healthy as possible and trying to get my weight lower — my walking around weight — and I have, and I’ve been feeling better,” Lewis said when asked about the ailment. “I haven’t had any issues with it lately.

“I kind of figured the reason it was happening was because usually big guys like myself, after I weigh in, I get up to around 290 (pounds) and that’s not good on my body,” he added. “That’s one of the reasons I felt like it was affecting me and why I was having those issues.”

Watching the video of him hitting mitts in his garage with Kru Bob Perez a couple weeks back, Lewis looks noticeably thinner and far more fluid on his feet than in prior bouts, which is a scary proposition for Oleinik and anyone else in the heavyweight division who might have to share the Octagon with the slimmed-down powerhouse in the future.

“We don’t throw kicks because my coach thinks it’s going to hurt my back in training and that’s just going to slow us down,” Lewis said, explaining some of the limitations he’s dealt with in the past because of his various health challenges. “We don’t even practice kicks — we just focus on cardio and technique and some type of game plan we’re going to use.”

MORE UFC VEGAS 6: Oleinik Will Never Give Up | Fight by Fight Preview | Fighters On The Rise | Significant Stats

Lewis is fully aware that everything he’s saying sounds like “fighter-speak” — the kind of responses competitors give whenever they’re asked about changes to their training routine or how their preparations for their upcoming fight have gone.

He knows that none of the words mean anything if he doesn’t go out and back them up on Saturday night, and he’s hoping that he gets that opportunity, though he’s admittedly skeptical about Oleinik’s willingness to let him deploy his standard “swangin’ and bangin’” style this weekend.

“I know these guys,” began Lewis, who has earned consecutive decision wins heading into his main event pairing with the highly experienced Russian grappling ace. “They come in and just try to hold on to me for dear life, wait for the time to run out. They don’t try to advance positions or look for the finish; they just want to hold me and waste time.

“If I get the chance to fight Curtis Blaydes, he’ll be the same way. No matter how much he says he’s going to stand up with me, he’s just going to try to hold me the whole fight and then think he really beat my *** or something like that.

So Lewis has some alternative ideas for how to try to win the fight on Saturday night.

“We’re gonna take him down,” he deadpanned. “We’re going to do a lot of takedowns. I’m going to wrestle him. Finish him with a flying armbar.”

The line is silent for a beat.

“I’ll tell you what’s going to happen,” he said in his husky drawl. “He’s going to try to take me down and I’m going to end up on top in some way, and if I end up on top, the fight is over with.

If he clinches up with me, just know that I’m going to push him off of me and start swinging like I always do.”

Except it won’t quite be “like always” because for the first time in his UFC career, “The Black Beast” has slimmed down, tightened up, and is in a position to use the full complement of his skills on Saturday night.

And you’re not going to want to miss it.