When the critically acclaimed documentary Fightville was released in 2011, who knew that two of the featured fighters in the film, Dustin Poirier and Derrick Krantz, would be fighting in pivotal UFC bouts a week apart from each other?

But here we are, eight years later, with Krantz ready to meet up with Song Kenan on Saturday in Shenzhen while Poirier prepares to unify the UFC lightweight crown with Khabib Nurmagomedov in Abu Dhabi on September 7.

As the Grateful Dead would say, “What a long, strange trip it’s been.”

And while the two are in different places in their respective MMA journeys at the moment, the point is that they’re here, far from their 2010 bout in Lafayette, Louisiana.

“What Dustin has done with his career is remarkable,” said Krantz, who was submitted by Poirier. “I am really happy about what he’s accomplished and what he’s done. I’m actually looking forward to his fight against Khabib and he’s definitely a role model. He’s gone above and beyond, and I respect him a lot for that.”

It’s the consensus opinion when it comes to Poirier, a fighter who wasn’t handed anything on his way to the top. And even though he’s champion now, there were plenty of peaks and valleys to get to this point, another reason why former foes like Krantz respect him. Someday, a local Texas fighter will say the same thing about “D-Rock,” who took the long way to the Octagon.

“That’s just how life is,” said Krantz, a 35-fight veteran who made his UFC debut in May, nearly 11 years after his pro debut. “You’re always gonna have your ups and downs, whether it’s fighting or business. Anywhere you go, you’re gonna have your good days and your bad days. It’s how you recover from it. That’s what defines you. Either you quit or you get back in it and try to find something new and create a new version of yourself. And pretty much that’s what I tried to do. I’m constantly trying to create a new and better version of me.”

At times it was difficult, especially on those days when he wondered if he was ever going to get the call to the UFC.

“That demon was always in the back of my head, but if you’re persistent and you put enough work and dedication in it and you have faith, it works out,” he said. “Everything happened to fall into line and it couldn’t have worked out any better.”

Krantz can say that now. He took a short notice fight with welterweight killer Vicente Luque to get his foot in the door, and though he lost that bout, he was brought back for a trip to China to meet Song. But it was during those years when he was beating UFC vets like Kyle Bradley, Daniel Roberts and Brock Larson while putting together winning streaks followed by key losses that he had to question what was going on.

“I definitely had those kind of thoughts every now and then, but I guess they needed a little more push and a little more personality,” said Krantz, who finally got the attention of UFC President Dana White when he knocked out Justin Patterson in March. White admitted that he had reservations about the veteran’s age, but Krantz’ attitude, coupled with the performance, earned him a spot on this year’s Contender Series.

That was until Neil Magny was forced out of his bout with Luque, opening the door for Krantz to skip the Contender Series and move right into the Octagon. He lost the fight to Luque, but he believes even a win on the DWCS wouldn’t guarantee him a spot on the roster. 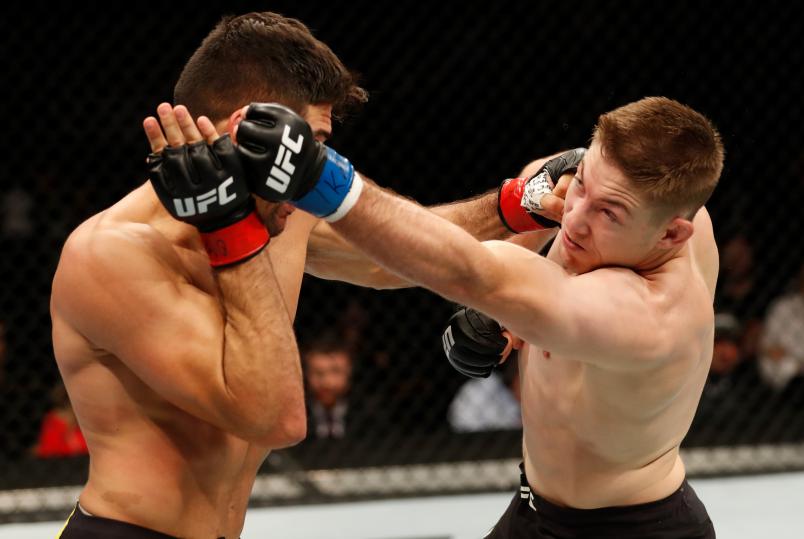 ROCHESTER, NY - MAY 18: (R-L) Derrick Krantz and Vicente Luque of Brazil trade punches in their welterweight bout during the UFC Fight Night event at Blue Cross Arena on May 18, 2019 in Rochester, New York. (Photo by Michael Owens/Zuffa LLC/Zuffa LLC via Getty Images)

ROCHESTER, NY - MAY 18: (R-L) Derrick Krantz and Vicente Luque of Brazil trade punches in their welterweight bout during the UFC Fight Night event at Blue Cross Arena on May 18, 2019 in Rochester, New York. (Photo by Michael Owens/Zuffa LLC/Zuffa LLC via

“They’re trying to bring in stars who are young and talented, and I’m not a young talent anymore,” said the 31-year-old. “I feel pretty young, but I’ve got a lot of experience and I’ve been fighting for so long so I’d say it’s kind of hard to bring in somebody like that (through the DWCS). I figured that me picking up a last-minute fight, something crazy and wild, would give me my shot. I wasn’t a hundred percent sure after I knocked out somebody on the Contender show that I’d still get signed because of all my experience. But things worked out the way they needed to, and here I am, in the best shape of my life, more dedicated and focused on my next fight.”

And at 31, he may be in his physical prime as he gets ready to face Song. And if all else fails, he still has the experience edge that could take him through any rough patches he encounters.

“After all the years, it just becomes instinctive,” Krantz said. “You can see things or you can feel things coming or you can recognize a finish because you’ve seen so many of them. I put a lot of miles on this body for being 31, but I still feel great. I still feel stronger and faster than I’ve ever been, so I’m in my prime and I would say I probably got a good five years left in me and I’m gonna go and attack it hard. I want to make an impact, be a good role model and show the world that it takes hard work and dedication to achieve things.”