Dern more than used to the spotlight

On Feb. 21, about a week and a half before Mackenzie Dern’s UFC 222 fight against Ashley Yoder, the unbeaten strawweight prospect admitted that life was pretty low-key heading into his first Octagon bout.

“It hasn’t been too crazy,” she said. “My team and my manager Danny (Rubenstein) are really good at helping me concentrate just on my training. I’m on the card with a friend of mine, ‘Sugar’ Sean (O’Malley), and we have a lot of UFC fighters that are coming up, so everyone’s getting all this attention and we’re gonna have the UFC in Glendale soon, so it’s good to take the craziness off me.”

Fast forward to fight week in Las Vegas, and it’s an entirely different story. Despite being on the prelim portion of the card, Dern is everywhere, from the UFC Embedded series to a seemingly endless array of online and print stories. But if anyone is built for this, it’s the 24-year-old Arizonan, a world champion in jiu-jitsu who is more than used to the spotlight.

“I definitely grow when I have the attention,” she said. “I’m not somebody who shies away from it. Even through my whole life doing jiu-jitsu, I’ve always had more attention because of who my dad (Wellingon ‘Megaton’ Dias) was, so people always had their eyes on me. So I’m not scared of the attention. I like it and I become a better fighter when I know it’s a big event or an all eyes on me type thing. But I still prefer to focus on my training.”

So does it feel like all eyes are on her as she gets ready to make the walk in T-Mobile Arena? 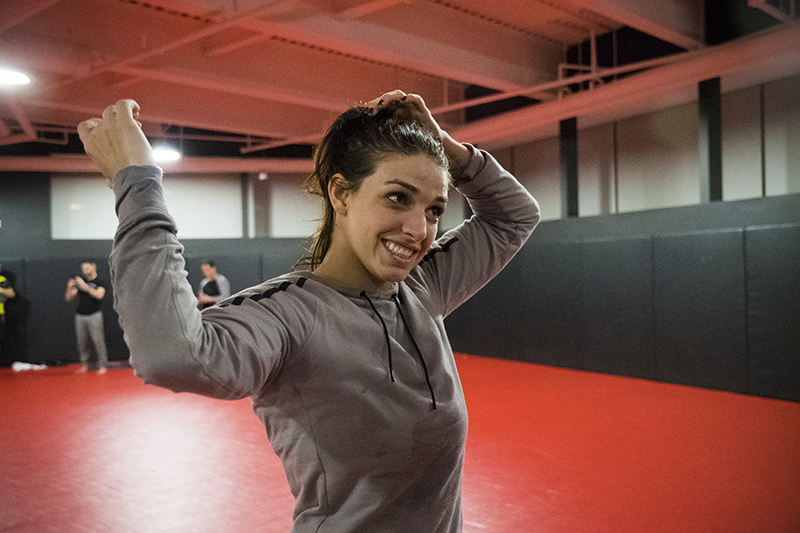 “It does,” Dern said. “I think because it’s my debut, maybe after that it will go down a little bit, but definitely after my first (MMA) fight, people were waiting to see when I was gonna fight in the UFC. And at the same time, there were people who wanted to see me fight in the UFC and people who said I’m not ready for the UFC, so both ways, they want to see how I’m gonna do.”

Turning pro in 2016, Dern has compiled a 5-0 record with three submissions. In her most recent bout, she made her Invicta FC debut, finishing Kaline Medeiros in the third round, and while she’s still a work in progress, there was no question in her mind that when the UFC call came, she was taking it. In fact, she laughs when I suggest that she probably felt ready the first time she put the gloves on.

“You’re totally right. I was like, ‘Man, I feel like I can fight already two years ago.’ (Laughs) And it really is hard, especially for me because I’m someone who doesn’t have too much patience to let things flow and have the right timing for everything. But I don’t have a team that sugarcoats everything. I have a team that’s really honest with me and I think that’s the most important thing. Sometimes we don’t like to hear it and you start to compare yourself with other people, but my coaches are all with me and they tell me the truth.”

Having produced UFC champions, contenders and top prospects, Glendale’s MMA Lab is the perfect place for Dern to learn her craft and keep her focused on developing her entire game. But if the Medeiros fight was any indication, the Lab folks may have to keep the jiu-jitsu ace from wanting to throw hands with everybody.

“I definitely don’t want to avoid it,” she said of the standup game. “For me, if I can punch and kick and be respected standing up too, that’s awesome, because if I wanted to just do jiu-jitsu, I would just stay in jiu-jitsu. I came into MMA to be a mixed martial arts fighter and be good at everything. But I don’t want to have that syndrome where you think you’re like Mike Tyson. (Laughs) So I’m trying to get my standup so dangerous that they think about my standup and then give me the openings to go to the ground.

But what about that Medeiros fight? Dern got the submission, but it looked like she wanted nothing more than a knockout. 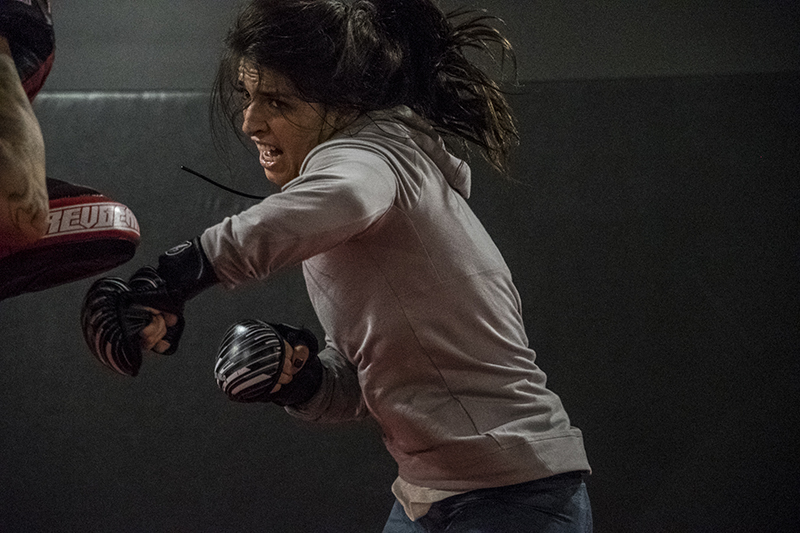 “It was crazy because that fight, I was real excited,” she said. “When you land one punch and you see that it rocked them a little bit, you get more confidence. All of a sudden, my coaches start telling me in the middle of the fight, ‘Okay, we don’t need a takedown. Let’s do the whole fight standing up.’ It wasn’t the game plan, but you have to be able to adapt.”

And with her ground game already world-class and her striking coming together, that confidence to do it all may be the secret to her soaring to the top of the division in the coming years.

“A hundred percent,” Dern said. “Even if you’re not there yet, if you have the confidence that you can beat anybody, you can beat anybody. Once you see one fighter that has so much confidence, it’s hard to take them off that train track. Maybe they’re not even a champion yet, but if their confidence is through the roof, it’s really hard to fight someone like that.”

On Saturday, the world will see how hard it is to fight Mackenzie Dern. She can’t wait.

“That’s why I came to MMA. I was looking for another mountain to climb. You can never have enough mountains, so I’m excited. And I think people are going to be happy with what they see.”