"My main thing is to make it simple. I try to go out
there, find an opening and attack it. That’s just how I approach it." - Derek Brunson 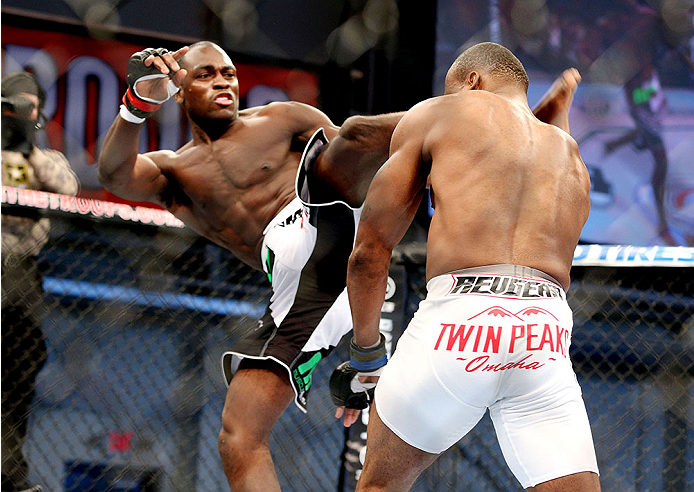 If the fight game is an educational realm where excellence comes with tenacity and experience provides the highest yields, Derek Brunson is on the advanced track.

At 29 years old and approaching four years in the professional ranks of the sport, the Wilmington, North Carolina native has shown a level of talent and moxie that has earned him a place on the biggest stage in mixed martial arts. That being said, no journey comes free of setbacks, and Brunson has used those hard knock nights to further a lesson plan that is already as on the fly as it gets.

He is fully aware that the window to make an impact on the sport is one that only stays open for a limited amount of time. That makes every potential opportunity a big step worth taking and Brunson intends to put everything he has into every chance he gets. In order to rise through the scene in the manner Brunson has accomplished, he’s had to seize the proverbial moment when it shows itself. And that is exactly what he did when the chance to fight Chris Leben at UFC 155 came about.

Not only had Brunson been eager to make his official UFC debut, but the chance to do so against a name like the one “The Crippler” carries was simply too sweet of a deal to pass up. Yet, with only two weeks’ notice before fight night, Brunson had a tall order in front of him. But those gut check moments are what he had used to navigate the path up until that point, and his confidence and belief in his skill set were enough to press forward.

And that is precisely what he did as he picked up the unanimous decision victory over the season one TUF alum in front of a lively Las Vegas crowd. While the bout itself was criticized by fight fans, Brunson knew it served the ultimate purpose. His game plan against Leben was methodical and effective, as he used the strengths that would provide the best path to victory. Once that initial “W” was under his belt, it would be on to bigger things, and with a full training camp to prepare, that’s exactly what he was about to provide.

“I don’t even think the UFC knew that I took it on short notice,” Brunson said in jest. “They seemed to think I just went out there and got tired after a full training camp. But it was a big fight, definitely in the sense of a name opponent. Every time Chris Leben comes out to fight he brings it and anyone who is going to fight him better be prepared. I took the fight on short notice but I went out there and got it done. At the end of the day I was happy to get the win.

The North Carolina-based fighter then kicked off November’s Fight for the Troops 3 card in explosive fashion with a 46 second finish of Brian Houston. Brunson came out of the gates hot as he landed a huge head kick that put his opponent on the deck, and with Houston dazed he sunk in the fight ending choke. His performance in Kentucky provided the exact opposite look his previous effort had shown, but nevertheless, they both resulted in victory.

“It was big win and a good performance,” Brunson said. “I put a lot of hard work into preparing for all of my fights and to go out there and get it done in quick fashion was great. It was good to get everyone excited, and making them want to see me fight again is a great thing.

“If anyone has followed my career, I’m a guy who goes out there and has gotten some quick finishes. Out of my 11 wins, eight of them have been in the first round and under two minutes. I go out there looking to get the job done. Granted, I may not be looking to stay on my feet the entire time, but if I get a full camp and study my opponent, I’m going to take the fight to where I can wear them down and get the win.”

With his hand being raised in back-to-back efforts, Brunson has continued to shoot for bigger targets. He will face former Olympic Silver medalist turned MMA powerhouse Yoel Romero at UFC Fight Night on January 15 in a matchup that pits two of the middleweight division’s best prospects against one another. The Cuban wrestling standout brings a pure power-based style into the cage and Brunson believes he has precisely the right tools to shut the heavily muscled Romero down.

“Yoel brings a lot to the table,” Brunson said. “He won a silver medal in the Olympics and he’s done very well in all the fights I’ve seen of his. But I’m also very explosive and I definitely like this fight. This is one of those fights for the fans. We are - at least in my opinion - two of the most explosive guys at 185 pounds and we are stepping in there to get after each other. I think it has the potential to be a very good fight.

“I definitely think I can push the pace in this fight. I’m a naturally strong guy. I always played football and stayed in sports and what not, but he does carry around a lot of muscle. I push my cardio day in and day out and I hope he comes into this fight in shape because if he doesn’t, he can get blown out of the water real quick because of my cardio. I’m going to be looking to push the pace and not let him rest and recover. I’m really looking to pick up the pace in this fight.”

After making the most of the opportunities that came his way in 2013, Brunson is eager to get his next campaign off to a solid start. Where his stock will ultimately be judged when he steps into the cage with Romero in less than two weeks, the work he’s put in to keep his career on the fast track is the fuel that allows him to keep pushing forward, and while climbing the ranks and trying to establish a name can be a chaotic process for a fighter to endure, Brunson approaches the fight the same way he handles the climb by making sure to keep everything simple. He is a complete believer in hard work paying off and the investment put into the process will make sure the progress will continue on all fronts.

“My main thing is to make it simple,” Brunson said. “I try to go out there, find an opening and attack it. That’s just how I approach it. I train really hard, look for openings and try to be a complete mixed martial artist out there rather than being someone in a Toughman competition. Those guys go out there and just slug. I go out there, set things up and try to seize the opportunity when it’s there to get the quick finish.

“I’ve only been fighting professionally a little over three and a half years and here I am. I’ve put a lot of hard work into it and I have so much left to achieve. I’m not even close to reaching my full potential. I’m learning things everyday and I’m in the gym constantly. I have a long way to go in this sport, but it’s looking up every day.”