Derek Brunson: Putting the Puzzle Together 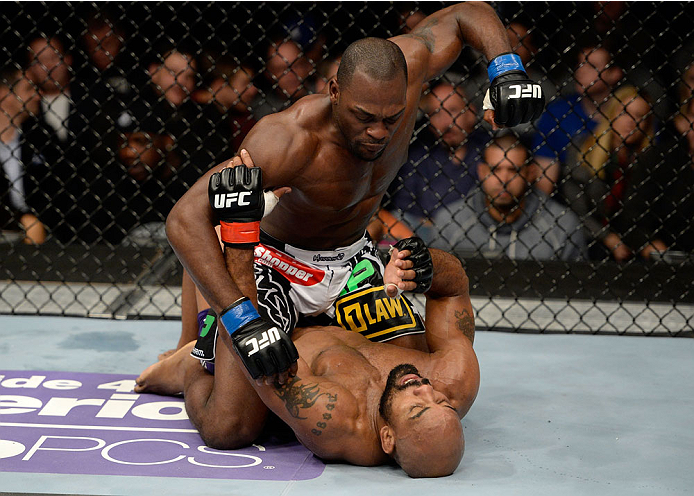 Derek Brunson has never been one to look before he leaps. And at this point, as a UFC middleweight with wins in two of his three fights in the Octagon, why should he? He’s made it this far with the attitude that if he sees it and likes it, he can do it, and while he’s suffered some bumps and bruises along the way, he hasn’t been broken yet.

He doesn’t plan on it happening this Saturday night in Sacramento either, as he expects to bounce back from a January loss to Yoel Romero with UFC win number three against Lorenz Larkin at UFC 177.

“He’s had close fights and he’s been on a rough streak,” Brunson said of Larkin, who has lost three of his last four. “He just hasn’t been getting the nod or doing enough to get the victory, but he’s a talented fighter. He’s one of those guys where he might lose a couple, but they’ll keep him around because he’s a fighter. He goes out there and fights and he’s looking to mix it up.”

On paper, it’s a helluva matchup between two middleweight prospects trying to take things to the next level in a tough division. Brunson agrees, and if there are those who wonder if he’s ready for the top 15, he’s not concerned with what other folks say, simply because he’s always followed his gut.

“I always jumped into things but I had great success,” he explains. “I wrestled one year in high school, which was essentially three months, and I went and I placed third in the state. I had D1 and D2 scholarship offers, but the first offer I got was from a D2 school, and I was wrestling guys who were three-time state champions from Idaho, from Cali, and they’ve been wrestling since they were five. I pick up wrestling my senior year of high school and I’m beating all these guys. I placed fourth in the nation my freshman year, so it’s always been learning on the fly. And I become a student of whatever I do, but you’re going to have those growing pains too.”

Nothing changed for North Carolina’s Brunson once he began competing in mixed martial arts. A pro since 2010, Brunson was in Strikeforce within seven fights, and his talent was evident. Honing that talent and adding experience to the mix was going to be the key to his future success, but patience wasn’t exactly a virtue.

While waiting for a fight after his decision win over Nate James in November of 2011, Brunson asked for and received permission to fight outside of Strikeforce against UFC vet Kendall Grove in June of 2012. It was a bad decision, but he lost the fight and put his Strikeforce deal at risk.

He did return in August of that year against one of the best in the world in Ronaldo “Jacare” Souza and got knocked out in 41 seconds. His career in early limbo, Brunson was determined to get back on track, so he took a short notice fight in the UFC against Chris Leben at UFC 155 in December of 2012. He won, but failed to impress. That wasn’t the case in his next bout, as he submitted Brian Houston in 48 seconds last November, and though he lost his subsequent matchup with Romero, his gutsy effort earned him Fight of the Night honors and a whole new group of fans. Brunson appreciated the fans and the bonus check, but as far as taking any other positives from the loss, that’s not happening.

“Everybody was definitely intrigued, but myself, I don’t really have moral victories,” Brunson said. “Any fight I go into, I expect to win, no matter what. I’m going to get it done, one way or the other and I’m going to prepare the best I can, so whenever I get in a fight, it’s about timing and getting it down.”

He got it down for much of the Romero fight, and heading into the third and final round against the Olympic Silver medalist, he was up 20-18 on all three judges’ scorecards. Then he hit the wall, another product of those growing pains you experience when you jump into the deep end of the water with no life jacket.

“Nutrition and rehydrating is very important when it comes to trying to perform at a high level for three five-minute rounds,” Brunson admits. “That was one of things that I didn’t handle well in that fight. If I would have done a few things different on the nutrition end, I would have easily got the win. I could have danced around or moved around, there were like two minutes left, I think, and I just could not move. All his punches, I saw them coming, and I go to cross block, and they just slipped through. He hit me one and I’m like ‘damn, that was stupid, I saw that coming.’ He threw another one and I saw it coming. Then I tried to shoot in and get a takedown because he was really aggressive and needed to finish to win. And that’s when he caught me. No excuses, but I learned. I need to focus on my nutrition and rehydrating, and eating and stuff like that.”

It’s part of the game for Derek Brunson. He hasn’t done this as long as some of his peers, and there’s still things to be learned when it comes to competing at the highest level in mixed martial arts. But as long as he’s here, expect him to figure things out.