Derek Brunson: Paying the Cost to be the Boss 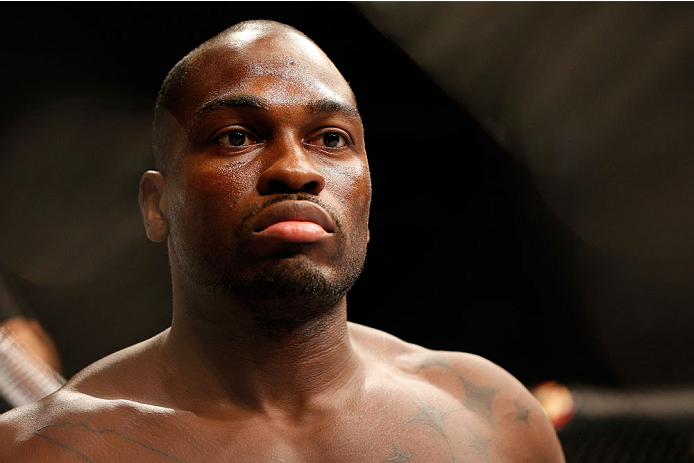 No one likes getting ready for a fight during the holiday season, and anyone who is in that position isn’t shy about telling you all the negatives: no Thanksgiving dinner, no downtime with family and friends, no time to take care of all those little things we all take for granted.

But are there any positives to the whole situation? I asked UFC middleweight Derek Brunson, someone who is generally a ‘glass half full’ kind of guy, that question.

“The positive is that you have a job,” he laughed. “But other than that, there's not much. It's tough. I've got my daughters back in North Carolina, so I'm away from them, but I had to stay focused on the task at hand and realize that life is about sacrifices and you have to give up certain things just to get other things that will be better in the long run.”

So once Brunson gets back home to Wilmington on December 14, he’ll have 11 days of decorating and shopping on his schedule. As for the reason for this late start, he’s been on the road for work; first in Albuquerque for training camp, and then in Phoenix for his Saturday bout against Ed Herman. Like any fight in the UFC, it’s an important one for the 30-year-old, but this one may have even more weight on it, considering that with a win, he may be knocking on the door of the 185-pound rankings for the first time.

“It's been a great 2014,” Brunson said. “If I’m able to pick up another win, I'm 4-1 in the UFC, and it could put me right inside the top 15. I'm definitely growing in the sport, picking up new tools, and that's a really good start for me. I'm on the path to the things that I want to achieve in the sport and what I want to do next.”

Owner of back-to-back wins over Chris Leben and Brian Houston to begin his UFC career, the former Strikeforce standout began 2014 with a loss, but it wasn’t your typical defeat. Against explosive contender Yoel Romero, Brunson shot out to a 2-0 lead in rounds, but was caught and finished late by the Cuban. The bout won Fight of the Night honors, and Brunson opened plenty of eyes with his performance. And though his win over Lorenz Larkin seven months later at UFC 177 won’t find its way onto any ‘Best of’ lists, a win’s a win, and Brunson will take it.

“Larkin's a tough guy,” Brunson said. “He's got a lot of snap on his punches and he's a pretty explosive, fast guy. It was a solid fight, overall. It wasn't my best performance, but it wouldn't have been the smartest thing to stand there and trade with Larkin the whole time, because every fight he's been in that stood the whole time, he made guys look pretty bad.”

And that may be the key takeaway from the fight for Brunson, the reality that if Plan A doesn’t work or if he gets some looks from an opponent that he doesn’t like, he has other options. In other words, the former three-time All-American wrestler is becoming a well-rounded mixed martial artist.

“I'm getting there,” he said. “I'm picking up different pieces, learning different things. This camp, I've been doing a lot of stand-up, and I'm really trying to get comfortable in that part of the game. I'm still learning and trying to be the best me, as opposed to relaxing and saying 'well, my skill set is dominant, so I can do this whenever I want to.' I'm still trying to explore other options so I can better my other skill sets, and I'm becoming dangerous everywhere. I definitely have my dominant skill set but I have a Plan B if things aren't going my way on the feet or in certain areas.”

That maturation process will be tested on Saturday by Herman, a seasoned vet who can pose problems for opponents anywhere the fight goes. And though he’s eight years into his UFC career, “Short Fuse” is still dangerous and capable of putting a dent in any prospect’s immediate hopes.

“He's a gritty, in your face type of guy,” Brunson said of Herman. “He's gonna keep coming forward, and he's solid in all areas. He's one of those guys that has been able to stay in the UFC for a long time, and he's steady.”

That’s a reputation Brunson wouldn’t mind having, as a steady performer who has a solid chance of winning every night he steps into the Octagon. That’s the plan at least, one he’s been working on in New Mexico at the Jackson’s MMA camp, where he returns after a short time away to train and spend time with his kids back in North Carolina.

“It felt like home again,” Brunson said of going back to the ABQ. “Nothing dropped off. There's always a lot of new guys coming in and out from other countries and stuff like that, but it's pretty much the same core of guys. In Albuquerque I've got more guys on my level to push me and give me a good workout and there's more consistency. I've got a lot of motivated guys in the gym. In North Carolina, you don't have a lot of guys that can do this as a career at this point, so they can only train when they can.”

Derek Brunson, UFC fighter, can train full-time, even during the holiday season. But if he beats Ed Herman and heads into 2015 on a two-fight winning streak, it will have all been worth it. Then it’s off to the mall…