Derek Brunson has been on the UFC roster for a little over eight years, and he’s been a fixture in the middleweight Top 10 for almost the entire time, amassing a 12-5 record while sharing the cage with a mix of the top contenders and upstarts the 185-pound division has seen during that span.

While critics will say he’s “never won the big one” and fixate on his losses, others will look at the totality of his career inside the Octagon, see the collection of names he’s faced, remember the close contests and competitive fights, not just the results, and understand that having that kind of staying power is something to be celebrated, not picked apart.

“I don’t have to be appreciated; I know I’ve done great things in this sport and I’ve been able to do great things for my family,” said Brunson, who returns to action this weekend in his fourth main event assignment, squaring off with last year’s breakout star, Kevin Holland. “To be in the UFC for as long as I have is super-tough. I’ve seen talented guys come in, get two fights, and get cut and they’re really good.

“I know the attention to detail you must be paying attention to every day in order to do this. It’s been a ride and I’m still pushing.”

Though his long-term goal remains to fight for, and ultimately win, the UFC middleweight title, Brunson has also settled into his role as the veteran litmus test hopefuls need to pass as they look to work their way up the divisional ladder.

Over the last two years, each of his bouts has come against streaking competitors aiming to take a major step forward, and each time, the 37-year-old has turned them back.

“Everybody always says, ‘You haven’t beaten anybody,’ and they’re like, ‘Oh, well let me beat somebody. What’s up, Derek — you want to fight?’ and I’m always up for the task,” laughed the veteran, who handed streaking Contender Series grad Edmen Shahbazyan his first professional loss last summer to extend his winning streak to three. “Everybody wants a piece.

“I used to take offense to it, but I’ve been in the game for a while, and guys are really trying to fight somebody and be relevant,” continued Brunson, who has shifted his training camps to Sanford MMA in South Florida after a couple years of training at his own gym at home in Wilmington, North Carolina. “I’m looking to do the same because I’m looking to elevate myself.

“A lot of guys above me, our fights don’t work out as far as timing or guys don’t want to fight me because they’re looking for a bigger, higher-ranked opponent, so this is the position I’ve been put in. I haven’t gotten that title shot, I haven’t been in the Top 5, so that’s what I’m looking to get also.”

Much like his headlining tilt with Shahbazyan last summer, this weekend’s main event pairing with Holland has a little more buzz than your standard “Veteran vs. Rising Star” clash.

Part of that is because Brunson so handily dispatched “The Golden Boy” back in August, instantly showing that he was on another level than the 23-year-old Glendale Fighting Club representative before putting him away early in the third. But it’s also because his opponent is coming off one of the most impressive campaigns in UFC history.

Holland joined Roger Huerta and Neil Magny as just the third fighter to earn five victories in a calendar year, but he needed just seven months to accomplish the feat, kicking off his run with a first-round stoppage win over Anthony Hernandez in May and closing it out with a first-round knockout win over Ronaldo “Jacare” Souza at UFC 256 in December.

“In this game, I’ve seen vets that won’t match the intensity of these young guys coming at them,” began Brunson, who posted seven victories in his first eight UFC appearances to catapult himself into the Top 10, where he’s remained ever since. “I’ve seen veterans say, ‘I don’t want to fight these young guys — they’re faster, they’re quicker; I’d rather fight a veteran guy.’

“I’m the exact opposite. I love testing myself. I want to show myself I can still compete at a high level regardless of whether it’s the new generation, older guys, whomever. I take pride in shutting guys down and keep myself moving forward, showing that I’m able to keep evolving with this new generation.” 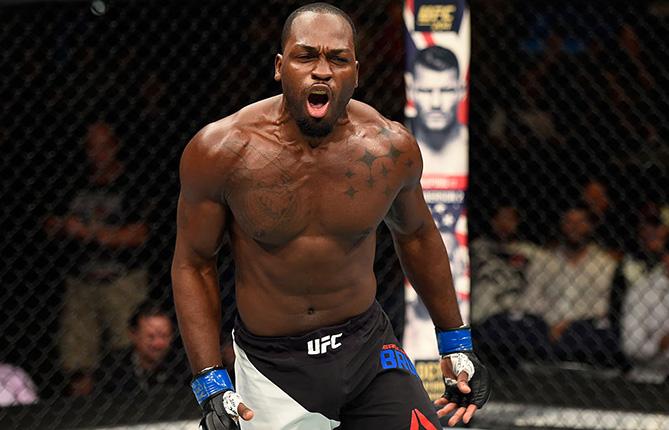 Rejoicing in the KO of Uriah Hall, September 17, 2016 in Hidalgo, TX (Photo by Josh Hedges/Zuffa LLC)

Along with brandishing an impressive winning streak, Holland’s other “claim to fame” is that UFC President Dana White dubbed him “Big Mouth” following his victory over Will Santiago Jr. on Season One of the Contender Series after the Texas-based chatterbox seemed more focused on talking during the fight than blowing through his opponent.

Order UFC 260: Miocic vs Ngannou For Any Device

He landed in the UFC regardless, jumping at a short notice opportunity less than two months after failing to come away from his Contender Series win with a contract in hand, and has been competing inside the Octagon — and providing his own in-fight commentary track — ever since.

“I’m all for it,” Brunson said enthusiastically when asked about Holland’s penchant for talking throughout his fights. “I hope he’s able to talk when he’s getting punched in the face.

“He can talk as much as he wants, but you might want to bite down on your mouthpiece because it doesn’t feel good getting punched with your mouth open,” he added. “I’m coming for his hype, he’s coming for my spot, and we’re going to collide.”

After cementing his place in the divisional hierarchy with his stoppage win over Shahbazyan last summer, Brunson hopes that pushing his winning streak to four by turning back last year’s “Breakout Fighter of the Year” this weekend will be the victory that he needs to garner some forward momentum of his own.

“I know I’m ranked No. 7 right now, so an impressive showing over him should move me up. I just want to make sure that I’m prepared for this fight, that I go out there, take care of business, and open up a lot of eyes going forward.

“I’m never asking for easy fights — I’m asking for the best guys in my division because I want a chance to elevate myself,” he added. “We have this fight, so I’ll go out here and take care of it, and then I think we have a lot of options after this one.”