Derek Brunson and the Power of Perseverance

"If I execute my plan, it doesn't matter what the other person does because I know pretty much what to do when I'm in the cage." - Derek Brunson 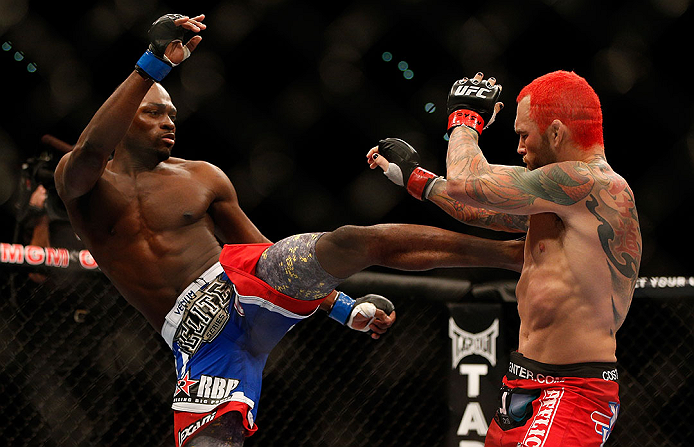 It’s been a long and crazy road for Derek Brunson.

He was a three-time Division II wrestling All-American at the University of North Carolina at Pembroke, but spent most of his young athletic life as a cheerleader and didn’t hit the mats until his senior year of high school.

After turning to mixed martial arts, Brunson won his first nine matches, seven coming in the first round. Competing for Strikeforce, Brunson stood at 3-0 and destined for a spot on The Ultimate Fighter, until being notified that his contract would not allow him to compete for a six-figure contract in the UFC.

Brunson then dropped his first fight to Kendall Grove on the independent circuit - a controversial spilt decision after taking the bout on four day’s notice, this after a showdown with Ronaldo “Jacare” Souza was delayed when his daughter was hospitalized and his failure of an eye exam. When the fight eventually took place, two months after the Grove bout, Brunson was knocked out in 41 seconds.

When Brunson finally made it to the UFC, it was after accepting a fight against Chris Leben at UFC 155 on 10 days’ notice to step in for the injured Karlos Vemola. Brunson won a unanimous decision, but few people left happy.

If you ask Brunson, all he wants is a little bit of leeway. Many have taken fights with precious days to prepare and few actually looked stellar, win or lose. Victory is the goal of a fighter, which Brunson achieved under a set of circumstances that left him winded and turned an expected tangle into a tedious exhibition.

"I would give myself an 8," Brunson said. "Ultimately your job is to go out there and win, and that's what I did. I didn't hear too many people complaining when (Chris) Weidman took a short-notice fight against Alessio Sakara and he wrestled him. His fight against Demian Maia was pretty sloppy. For the short amount of time I had to prepare, I did pretty good."

Whether it’s a wicked weight cut, a crash course or another unique circumstance, a fighter is afforded some slack when taking a bout on short notice - to an extent. By the time Brunson (10-2 MMA, 1-0 UFC) steps back inside the Octagon on June 8 at UFC on FUEL TV 10 in Brazil, there will be no excuses against Ronny Markes. The native of Rio de Janeiro takes a 14-1 record (3-0 in the UFC) into the contest and will have an entire nation in his corner.

"While I don't think he's great at one thing, he's pretty much good at everything," Brunson said. "It's not so much preparing for Ronny Markes. I'm going to prepare the same for everybody. I'm going to utilize my best tools and get myself in the best shape. If I execute my plan, it doesn't matter what the other person does because I know pretty much what to do when I'm in the cage."

Brunson’s plan for an athletic career didn’t get fully untracked until his senior year at John T. Hoggard High School in Wilmington, North Carolina. He ran track and advanced to the 4-A state meet in two events. After initially quitting, he gave football a second chance and was recruited by several NCAA Division II schools to play defensive end.

More than anything, Brunson was a cheerleader. As part of the Wilmington All-Stars, he qualified annually for a national tournament with his teams placing first each year except 2000 when it was a runner-up. It also set the foundation for future athletic endeavors.

"It's really hard on your body," Brunson said. "I definitely credit it to developing my core strength and flexibility and stamina."

At the urging of Hoggard wrestling coach Dan Willis, Brunson finally gave wrestling a shot. It was the culmination of a relationship that started when Willis saw something within Brunson as coach of his middle-school football team and in his early years of high school.

"I tried to get him out for wrestling his sophomore year. He came out for two or three days and just beat the crap of some of my good kids," Willis said. "He learned what kind of work ethic he needed to have. We had another state champion on the team that year he wrestled with every day. He learned more through him than me on what it takes to be successful."

Willis was an All-America wrestler at UNC Pembroke and helped steer Brunson towards the liberal arts university. He made the national semifinals as a freshman in just his second year on the mats and eventually revealed after graduation that he didn’t work to the maximum of his capabilities.

"He felt like he didn't push himself as hard as he could,” Willis said. "It's not that he didn't work hard before, he just realized how to push himself to his full potential."

The lessons learned were about work ethic, and Brunson vowed he wasn’t going to make the same mistakes in MMA. He graduated with a B.A. in Criminal Justice, and was a case worker and home therapist when he felt the urge to wrestle again.

"It was just the grittiness, the dominating of guys ... the image of the sport is tough and I really enjoyed it," Brunson said. "I weighed 190 and wrestled at 215. I was wrestling guys who weighed 240 and cut to make 215. I was walking around at 190 and dominating guys who were bigger than me."

Finally in a place of stability, Brunson’s journey continues on June 8. It’s been a theme of perseverance and pressing forward. For every obstacle that’s been put in his path, Brunson has plowed right through it. This time, he’ll be coming at his next opponent at full strength.

"At the end of the day I take it for what it's worth and just keep moving on, and I'll figure it out,” Brunson said.