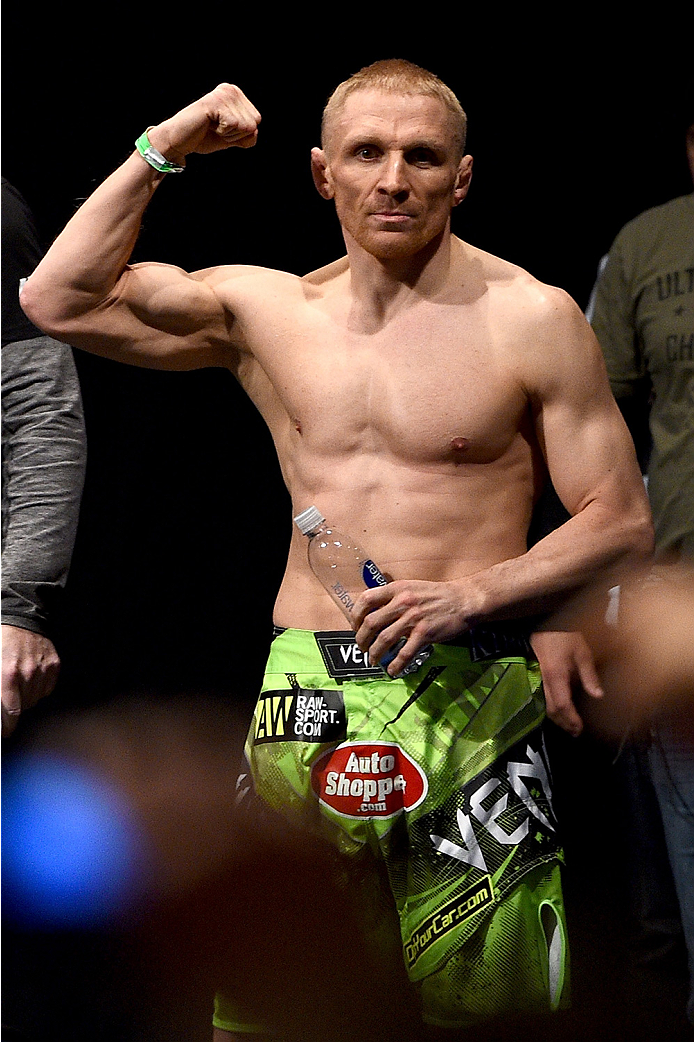 Throughout his time competing in combat sports, there isn’t much Dennis Siver hasn’t seen.

Since his teenage years, the Russia native has spent time forging his skills and challenging himself in various martial arts disciplines. Siver has spent the past 11 years testing his mettle in mixed martial arts, where he’s become one of the most technical strikers to ever compete inside the Octagon.

Nevertheless, a life committed to setting your will against that of another at the highest levels of competition is one where setbacks and adversity are simply part of the terrain, and the 36-year-old featherweight has experienced his fair share of ups and downs along his journey. Yet, during his time spent in two of the most talent-stacked divisions under the UFC banner, the Mannheim, Germany-based fighter has come to find something deeper in the quest for redemption.

“It may sound like a cliché, but what motivates me is to pick myself up off the floor when things don’t go my way,” Siver said. “It’s my love of the sport. I love fighting and I couldn’t picture myself doing anything else at the moment. I hope to show with my upcoming fight against Tatsuya (Kawajiri) that my loss to (Conor) McGregor wasn’t a sign that I’m done, but just a matter of drawing the short end of the stick that day.”

Siver’s next bout is against highly regarded Japanese MMA veteran Tatsuya Kawajiri this weekend at UFC Fight Night: Jedrzejczyk vs. Penne, which marks the UFC’s return to Berlin on Saturday night. Both men competing in the card’s co-main event are experienced fighters who have made successful careers on their ability to mix aggression with technical savvy. From a stylistic standpoint, the matchup between Siver and Kawajiri will be, at the very least, an exciting scrap, but there are additional elements that will fan the flames of battle on fight night.

Both Siver and Kawajiri are coming off losses in their most recent showings, and the quest to remain in the thick of an increasingly competitive featherweight division will come front and center in Berlin. Over the past two years, the 145-pound collective has become a deep well of elite-level talent, and the current landscape is one where losses are of the high stakes variety.

Siver has no intention of becoming an “also ran” in the divisional mix, and knows it will take a victory over a fighter he has a tremendous amount of respect for on Saturday night to keep his upper echelon status alive.

“Kawajiri is a very well-known name in the MMA community,” Siver said. “I’m letting you in on a little secret here: I’m a huge fan of his and watched his fights religiously when I hadn’t even dreamed of becoming a professional MMA fighter. He was my idol back in the day, and being able to fight him now is both an honor and a dream come true.

“There’s always pressure to win every fight. The more people you know are sitting in the stands and watching at home, the bigger the pressure. And there will be many, many people watching this time around. Fans are going to see an interesting and action-packed fight between two athletes from different continents who are at similar points in their careers. I owe my fans something special and that is what I plan on giving them.”

While Siver’s eagerness to get back into the win column will be a main point of focus for his upcoming fight, there is an additional element of motivation in the fact that he will be competing in the country he has called home for the first time in nearly five years. Being able to able to give back to the passionate German fan base is something that has driven him to take his training and preparation further to ensure he will be in top form when he steps into the Octagon.

Siver has spent his entire career competing on stages all across the globe, but he’s quick to admit there is something extra special about being able to put on a show for his fellow Germans.

“It’s so great being able to fight at home again,” Siver said. “While I love the opportunity to fight abroad, I hate travel and everything associated with it. After Boston, it will be nice not being Public Enemy No. 1. Of course I feel pressure because I don’t want to let my fans and my country down. I draw energy and motivation from it though, and combined with being well prepared for the fight, I will give my fans something to write home about.”

In addition to his own goals and objectives that Siver has fought diligently to accomplish, his time in the sport has allowed him a personal viewpoint of the bigger picture happening on the global front. The promotional stage he’s been competing on for nearly a decade has made tremendous leaps in its push for international expansion in recent years. This means more and more talent is emerging from places that never before registered on the MMA radar, and for a fighter who forged his career when only a faint path existed like Siver, that means something.

So he’s excited for what the future holds for promising talent who otherwise would have never gotten a chance to fulfill their dreams, and he believes the UFC’s global expansion will yield remarkable things in the future.

“The UFC having become so international is a great thing,” Siver said. “It’s allowed me to fight all over the world and to see the world in the process. I’ve fought in Australia, I’ve fought all over the United States. Heck, I know Vegas better than some cities in Germany by now. The international expansion the UFC has had is also good for the growth of our sport. There is more up-and-coming talent in Europe alone than at any given point in the past and it’s mostly due to the UFC.”