"He has never fought a kickboxer of my stature and my talent, and that will pose considerable problems for him." - Dennis Siver 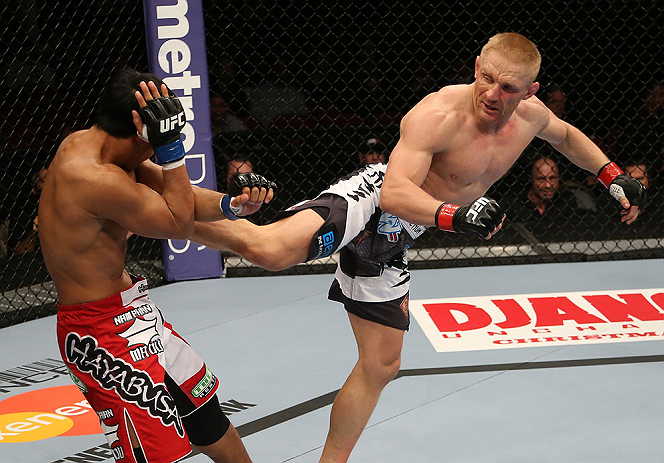 When that phone call or email comes, letting you know that you’ve been released from your UFC contract, there are any number of reactions that can follow, anger or disbelief being chief among them. But when Dennis Siver got cut from the organization nearly five years ago after a loss to Melvin Guillard in 2008, he simply took it as a sign that there were some changes to be made. Pronto.

“You have to understand one thing about me: I don't worry about things that I realistically couldn't have prevented,” said Siver through translator Oliver Copp. “The Guillard loss never really bothered me. He's a great, explosive striker and he just caught me. That can happen to anybody. That said, after the UFC cut me, I went back to the drawing board. I had clearly not been ready when they had brought me in. I depended too much on my kickboxing and didn't put enough emphasis on wrestling and submissions. It really sounds like a cliché when fighters say that losing and getting cut was the best thing that ever happened to them. That's a load of bull. But what it does offer you is perspective. I started training grappling a lot more and I started taking wrestling seriously.”

Siver wouldn’t have to wait long to be back in the Octagon, getting his return ticket in early 2009 after finishing 2008 with a non-UFC win over Chas Jacquier. He hasn’t been in danger of being cut since, going 9-2 with four finishes and four post-fight bonuses. On Saturday, he looks to push his current winning streak to three in a pivotal featherweight matchup with fellow contender Cub Swanson. It’s a huge change from his first UFC run of 1-3. So what’s been the difference?

“My attitude towards the sport,” he said. “I used to be a kickboxer who was really good at kickboxing and hence beat fighters in Europe based on that quality alone. I am now a mixed martial artist. I respect wrestling. I respect jiu-jitsu. There is nothing I won't do, no style I won't train to better myself every day. I have had quite a good run on the second go-around. Cowboy (Cerrone) caught me and Ross Pearson shut me down, but everybody else has been having more than a bit of trouble dealing with my style.”

In Siver’s second go-round, the loss to Pearson was a competitive one that earned Fight of the Night honors, with the Cerrone defeat in 2011 the only performance in which he was clearly out of sorts, prompting a move to featherweight for his next fight. But to Siver, the win that showed him just how far he had come was a UFC 127 win over George Sotiropoulos in Sotiropoulos’ home of Sydney, Australia.

“The first few fights back were nice, but ultimately, they weren't satisfying,” he said. “The one that really meant a lot to me was picking apart George Sotiropoulos at home, back when everybody thought he was going to be the next big thing. You can trace that win back to the period where I was out of the UFC. And yes, it was the best thing that ever happened to me career-wise in hindsight.”

Along with Sotiropoulos, Siver has notched wins over Spencer Fisher, Matt Wiman, Diego Nunes, and Nam Phan, and as he returns to the Octagon on Saturday, he feels like a title shot is finally within reach.

“It has felt that way for a while now,” he said. “When I was first supposed to fight Cub Swanson, I thought that a good win over him would put me in a prime position to contend, especially in the case of an injury occurring to a planned title contender. I'm not getting any younger, so I'm in a must-win situation every time I step in the Octagon.”

The Swanson fight was originally scheduled for February’s UFC on FUEL TV event in London, but a knee injury sidelined the 34-year-old Russia-born German, who nonetheless did what he could to keep sharp when he wasn’t able to train like he normally does.

“You know, for a guy like me, a knee injury isn't just any injury,” said Siver. “I'm primarily a kickboxer. Take my knees away and you take away the base of my fighting style - and my training. You can't grapple properly with a knee you just had surgery on. You can't wrestle. You can't kick. You can't do most cardio exercises. It's tough. It really is. Additionally, I have a real sweet tooth and tend to binge every now and then. (Laughs) The temptation was there to go for chocolate when I couldn't get my endorphins from training. So I did a lot of yoga and breathing exercises to stay grounded, and I coached quite a few days during that time. I used my downtime to scout Cub which is something I usually don't do in training. Essentially, I took a lemon and turned it into lemonade. I've never been this prepared for a fight.”

And in Swanson, the potential is there for Siver and his opponent to each pick up another bonus check, because if they don’t produce a Fight of the Night, we could be seeing a Knockout of the Night. And if that’s the case, Siver’s betting that he will be the one with the fatter wallet on Sunday morning.

“Cub Swanson is explosive, has great technique and is exceptionally strong mentally,” said Siver. “He wants to knock me out. The downside is that he tends to leave himself open to counters by being overly aggressive. I also think I'll have a considerable power advantage over him. He has never fought a kickboxer of my stature and my talent, and that will pose considerable problems for him. I absolutely think Cub is a dangerous fighter to face, and - as we know - anything can happen in a fight. I still predict that I'll TKO him in round two.”

Blessed with confidence, talent, and fight altering power, Dennis Siver is on track – if he keeps winning – to sail pass the bigger European names in the UFC and possibly join Bas Rutten and Andrei Arlovski as the only fighters from the continent to win a UFC title. Not bad for a guy who was out of a job just a few years back.

“It would mean the world to me,” he said of becoming a UFC champion. “Mind you, I'm a humble person. I don't believe in piling up luxury items... well, except maybe for my BMW. (Laughs) I'm not in this for the glory or for the recognition. I'm in it to prove myself against the best of the best. If I manage to win the belt, it will validate the hard work and sacrifices that I've made to get here. European fighters typically aren't taken as seriously as title threats compared to their counterparts from North America and Brazil. Having another one of us win a title would go a long way towards legitimizing us.”