"I feel like it’s a new career for me and I want to see what I can do. I think I can beat all the top guys." - Dennis Hallman 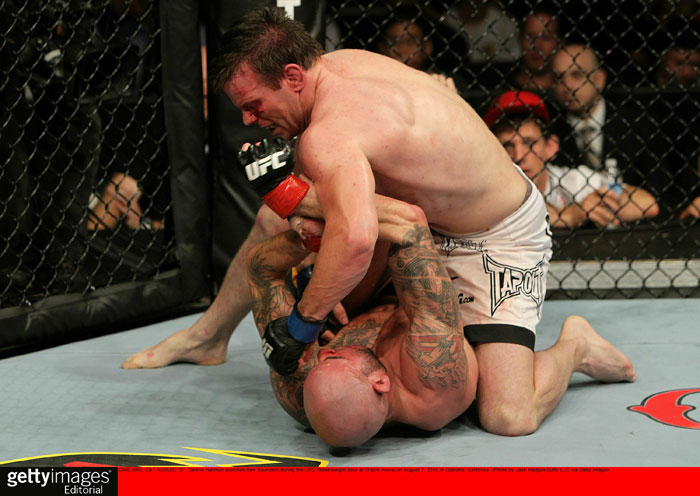 With 82 professional fights under his belt, you might assume that Dennis Hallman has seen it all when it comes to what an opponent can show him in a mixed martial arts match. Then again, he’s never faced someone like 63 fight veteran Brian Ebersole, who brings a new meaning to the word orthodox in the Octagon.

Point taken by Hallman, but that doesn’t mean he’s losing any sleep over it in the days leading up to the welterweights’ August 6th battle in Philadelphia.

“I think that he definitely brings some new aspects, but I’ve seen the things that he does,” he said. “You practice for 15 years, you got guys that do the same kind of thing.”

“I got a really talented guy names Joey Guel and he does a real good job doing the same stuff that Ebersole does.”

That’s the type of response you expect from the 35-year old Hallman, someone who has been doing this sort of thing since the late-90s, when there were no UFC action figures or trading cards, and certainly no Twitter or Facebook. So how is “Superman” dealing with this brave, new world?

“It’s different,” he chuckles. “You get to hear everybody’s opinions now, whether they’re good or bad. But I guess that’s the way it is in all sports. The people that do the sport know about it, and the fans, it’s a learning process for them as they go along.”

And despite being in the sport for 15 years, Hallman has not yet reached the masses like some of his peers have, despite his two wins over Matt Hughes, his UFC 33 title fight with Jens Pulver, and his current two fight winning streak in the Octagon.

“Anybody that’s not hardcore still hasn’t caught on,” said Hallman. “I think you have to be on Spike or the main card to get more recognition. The fight with (Karo) Parisyan got aired, but only a few people got to see that. The more exposure I get, the more I’ll get to see how the new fans are.”

So, in other words, after his main card bout with Ebersole.

Odd as it may sound, that might be the best case scenario for Hallman because in a lot of ways, he’s a brand new fighter. After years of toil both in the UFC and outside of it, Hallman had seemingly hit a fighting plateau. He was a tough fight for anyone, and he had the potential to pull off a submission on anyone on any given night, but the consistency just wasn’t there for him to compile a lengthy winning streak in the big show and make a title run in the modern game. In fact, until his recent streak, he was just 1-4 in the Octagon.

Yet the problem wasn’t with Hallman’s skill level or with an inability to win the big one. It was his body letting him know that something was wrong, and that something was celiac disease, which is caused by an adverse reaction to gluten and that crippled his ability to fight into the late rounds of fights with any semblance of cardio. And all it takes is one look at his record to bear that fact out. Hallman finished 36 of his 64 wins before the diagnosis in the first round, and in bouts going the distance, he was a paltry 4-8-2.

Following the ordeal of cutting gluten from his diet, Hallman decisioned Ben Saunders at UFC 117 in August of 2010, and then three months later he stopped Karo Parisyan in less than two minutes at UFC 123. It’s as if his career has been resurrected, but he admits, “It hasn’t really clicked for me yet. The Ben Saunders fight, I held back a little bit just because I was nervous that I was gonna gas out, but I didn’t. I went about 85% for that whole fight, and the Parisyan fight was over quick. But I’m pretty confident now.”

Just don’t ask him about his new diet.

“For 80-something fights, right after weigh-ins I would carb load with pasta, which is my favorite, and bread, and what I was doing was poisoning my body the night before the fight,” he explains. “Now I eat a lot of vegetables and meat, which is great, but…”

“I can’t even handle talking about it,” he laughs. “I love pasta so much and I can’t eat it.”

Not even gluten-free pasta?

“They have rice pasta, but it’s not as good.”

Okay, we’ll change the subject, but all kidding aside, you won’t hear Hallman complaining about the lack of pasta when you consider that now he can seriously make a run for the belt again, this time at 170 pounds. And though more casual fans might snicker at the idea of Hallman trading blows with current champ Georges St-Pierre, if you ever talk to the fighters who have passed through his training camp, you’ll hear high praise for the Washington state native, who has worked with dozens over the years, including UFC up and comer Cody McKenzie, Strikeforce prospect Sterling Ford, and newly crowned Strikeforce women’s champion Miesha Tate.

“They’re all self-made fighters,” said Hallman of the aforementioned trio. “They just happened to be in our area and they wanted to train with other quality guys. I appreciate the kind words that they have to say, but as with it is with any fighter, it really takes the fighter to become good. The coach can only do so much.”

Coaching has been a part of his life for as long as he’s been training though, and strangely enough, it wasn’t just to teach, but to have someone to train with.

“I started out as a coach so I could make training partners for myself,” he said. “(Longtime MMA standout) Benji Radach was a raw and phenomenal athlete and I kinda molded him to become a better training partner for myself. And it’s always been that way, probably because I started at the infancy of the sport, so half the job is working on yourself and half is making training partners better so that you can have a good camp.”

When he sat down for this interview last week, camp was going as well as it could be in the days leading up to the bout, and especially now, he feels like he has a new lease on his fighting life.

“It’s awesome,” he said. “I just got done training five fives earlier today and I can go with a fresh guy in the fifth round and have cardio. It’s night and day for me. I used to only be able to train at half speed, so it’s a blessing, and now I can see how far it will take me.”

And he’s not aiming just for some wins; he’s shooting for the stars, “Superman” style.

“I got a family and I want to make money,” said Hallman, “but at the same time, I feel like it’s a new career for me and I want to see what I can do. I think I can beat all the top guys. Even when I had my gluten allergy, on any given day I thought I could beat any one of those guys. Now it’s a level playing field, so let’s see what I can do on a consistent basis.”