Dennis Bermudez: Rolling with the Punches

"As long as I keep winning my fights, good things will keep happening
just like they are, so I’m going to just keep rolling with it." - Dennis Bermudez 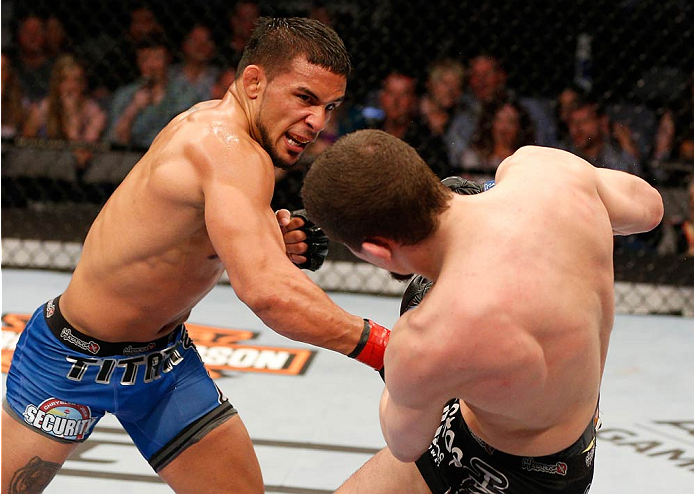 With all the attention focused on the UFC featherweight division recently, it’s a wonder why Dennis Bermudez’ name doesn’t come up more in conversations about the top emerging talents in the 145-pound ranks.

After finishing in the runner-up position on Season 14 of The Ultimate Fighter, the Long Island native has gone a perfect 6-0 inside the Octagon, making a slow and steady climb up the divisional ladder.

In 2013, Bermudez earned a three-pack of victories, including the Fight of the Year candidate he turned in with Matt Grice at UFC 157 in Anaheim the night Ronda Rousey made history by being the first female to register a win in the UFC. To start 2014, the 27-year-old turned in arguably his best outing to date – a Performance of the Night-winning finish of Jimy Hettes at UFC 171 in Dallas.

With every passing event, a new featherweight makes a statement and is thrust into the spotlight.

Four weeks ago, Cub Swanson pushed his winning streak to six with a unanimous decision 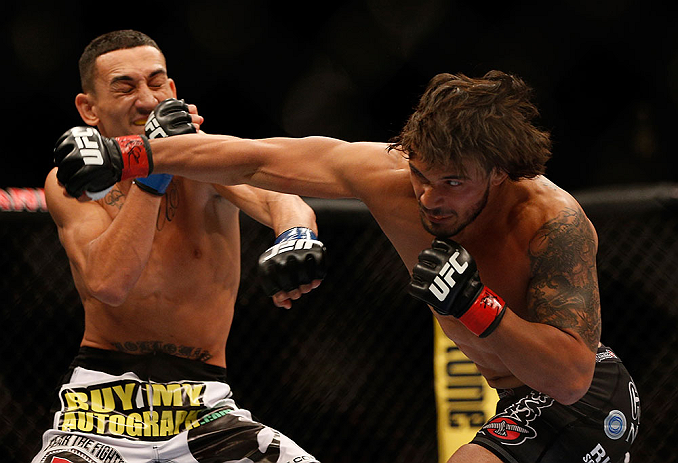 victory over Jeremy Stephens in the main event of the UFC’s debut show in San Antonio, Texas. A week later, former lightweight champions Frankie Edgar and BJ Penn renewed acquaintances and completed their trilogy, with “The Answer” turning in a dominant performance that ushered the legendary Hawaiian into retirement.

Just last weekend, “The Notorious” Conor McGregor closed out an electric evening of fights in Dublin with a first-round technical knockout win over Diego Brandao, the man who bested Bermudez in the TUF 14 Finale nearly three years ago.

As his contemporaries jockey for position and argue their respective cases for championship contention, “Dennis the Menace” is content to play the cut, piling up wins and continuing to venture down the path the UFC has set out for him.

“I feel like I would have excelled on whatever path was given to me – whether I was thrown to the wolves right away or if I’ve taken this back route, the long way to the title,” admits Bermudez, who returns to action against veteran Clay Guida on the main card of Saturday’s UFC on FOX event in San Jose. “I feel this has been good for me. It has allowed me to get comfortable in the UFC and I think it’s the plan that the UFC has for me.

> Watch: Road to the Octagon - Clay Guida vs. Dennis Bermudez

“It’s like you said before about `act like you’ve been there before,’” he continues, touching on a subject we had discussed earlier in his career and returned to earlier in the conversation. “When I first got into fighting, in my head I was like, `I’m going to be good. I’m going to climb up the ranks and I’m going to be champion one day’ and this is just part of that journey.

While some fighters point to specific skills and techniques when asked to discuss their greatest improvements from fight-to-fight, it’s feeling comfortable inside the cage that Bermudez says has increased the most and he credits multiple-time title challenger Chael Sonnen with helping him transform the Octagon from a pressure-packed battleground into a place where he feels relaxed.

“Being relaxed can help take you a long way,” begins Bermudez, who carries a 14-3 record into his meeting with Guida this weekend. “When people are under stress, they tend to tighten up and may not perform to their full potential, whereas if you’re loose, you’re feeling good, you might perform even better than you would normally. 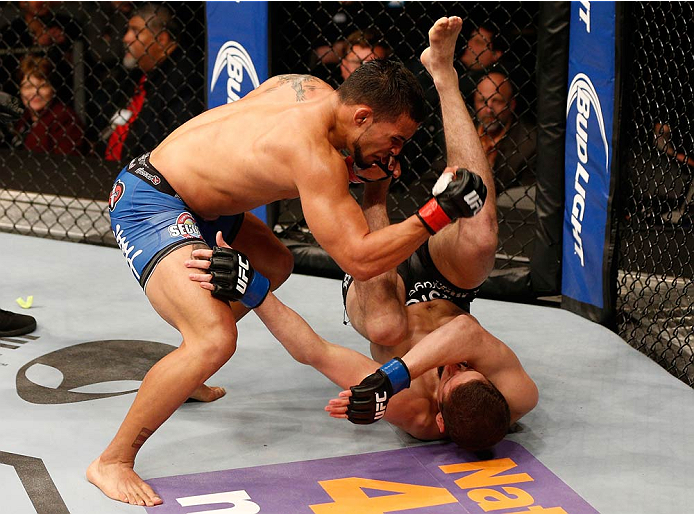 “(Chael Sonnen once told me), `When you’re about to go out there and fight and you see your opponent, can you beat your opponent come fight night? If the answer is no, go back to somewhere where you’re even more comfortable – your wrestling room or your home gym. Take them there. Can you beat them there? If the answer is still no, take them back to somewhere you’re even more comfortable – your home, your bedroom. Can you beat them up there? If the answer is yes, take everything you would do to your home gym and implement it there. Once you can beat him there, take him to the main stage and beat him there.’ It’s all about comfort.

“(Against Hettes) I was almost so comfortable that it almost felt like I wasn’t trying,” adds Bermudez. “I was just going through what I’ve been trained to do. I was just listening and listening to my body – not going through the motions, but just being out there flowing.”

If that breakdown sounds a little more light and airy than you might expect from a blue-collared former collegiate wrestler that calls Long Island home, it’s because Bermudez has been spending the final few weeks of his training camps on the West Coast, where life in Orange County agrees with him.

“No matter what time of the year it’s nice here, where sometimes New York can be miserable to the point that you don’t feel like getting out of bed some days,” laughs Bermudez, who still does the majority of his preparation with Keith Trimble, Gregg DePasquale and the team at Long Island MMA. “People eat a little bit cleaner out here, whereas in New York there is great pizza and all those things, as opposed to juice bars like here, so it’s a little easier on the weight cut.

“After the Tommy Hayden fight, I had the Grice fight and I came out a week prior to fight week just to get my weight down and it was just so smooth. There’s stress back home, but when I come out to California, I’m away from everything else and can zoom in and focus on just fighting.

“Back home, I’m worrying about tons of stuff. Out here, I’ve got all my ducks in a row and just have to get ready to fight.”

Despite a six-fight winning streak and holding down the No. 12 place in the UFC Fighter Rankings, Saturday’s bout with Guida marks Bermudez’ first appearance on the main card of a UFC event since the Ultimate Fighter 14 finale in 2011.

Though the SAP Center will be packed and millions will be watching at home, the fact that he’s making his main card debut on FOX against the wildly popular veteran with wild hair hasn’t changed Bermudez’ mindset one bit as Saturday night’s showdown with “The Carpenter” draws closer.

“It doesn’t matter if I fight on the main card or on Fight Pass, I’m still fighting in front of a ton of people and I’m still going to go out there and do the same thing.

“In my head, I think Clay is going to overlook me and that would be perfect,” he admits, breaking 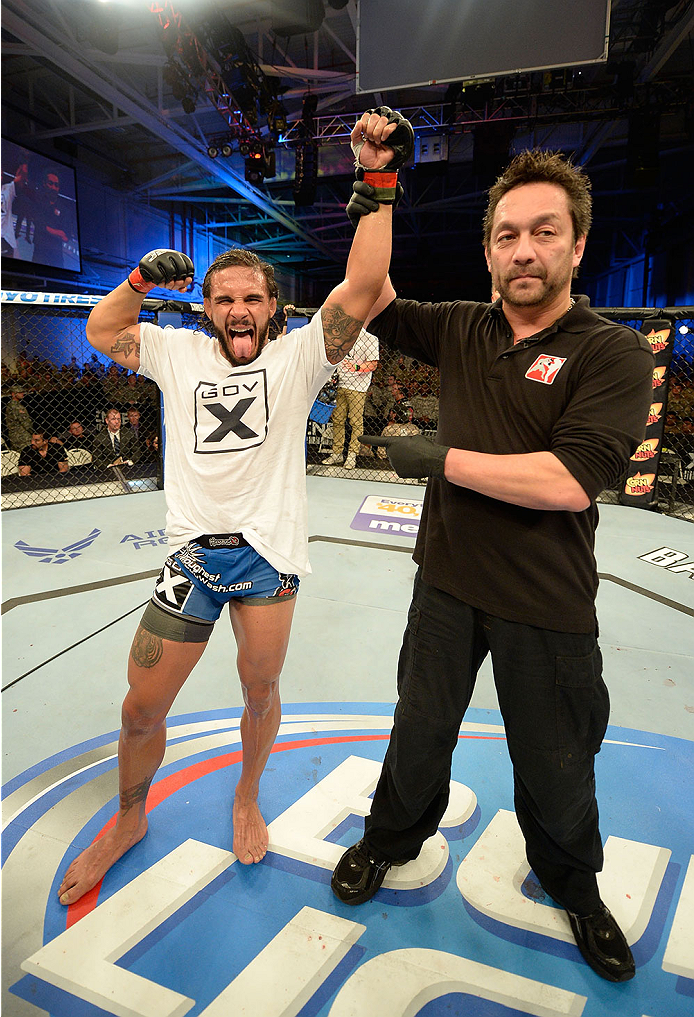 down how he sees the fight playing out. “I expect him to come out with his crazy, hair all over the place, give-and-go kind of dance and I’m going to stay cool, calm and collected like I have in these past fights – hold my ground, push forward, big takedowns, sharp striking.”

With all the action taking place in and around the top of the featherweight division, you might expect Bermudez to start kicking up a fuss and making demands should he pick up his seventh consecutive victory Saturday night on FOX.

Perhaps he will, just so that his desires are officially stated for the record and there is no confusion about his ultimate ambition.

But there’s a very good chance that he won’t because the Long Island native has embraced a very laid back, “O.C.” mindset about reaching his goals and he sees no reason to deviate from an approach that is clearly working.

“As long as I keep winning my fights, good things will keep happening just like they are, so I’m going to just keep rolling with it.”