Dennis Bermudez: A Monster in the Featherweight Ranks

"I’m going to be in his face for 15 minutes, and over that time, my goal is to really make him think about quitting. I want to give him a reason to do that." - Dennis Bermudez 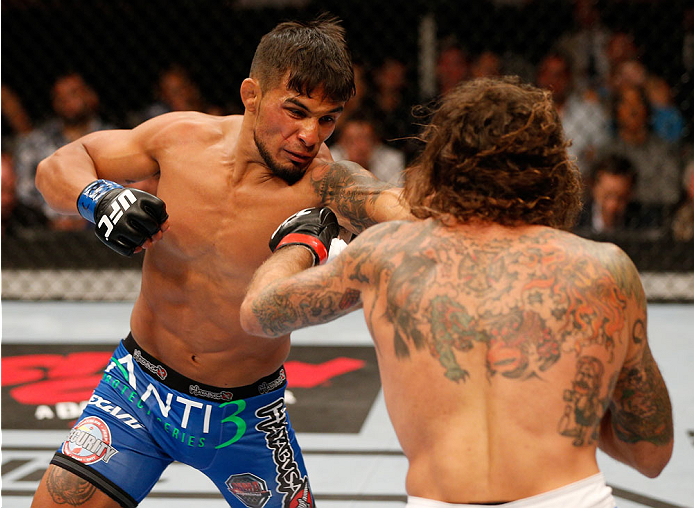 When a fighter comes into their own it is a special transition to witness. New skills are put on display each and every time out, but perhaps most importantly, a confidence that may have always existed on the inside radiates for all who are watching to see.

Dennis Bermudez is currently riding that particular roller coaster of self-belief, and it has carried him from being a fighter with potential to becoming one of the top contenders in a talent-stacked title picture at 145 pounds. “The Menace” is exactly where he always knew he would be heading into the biggest fight of his career at UFC 180 this Saturday night in Mexico City, and he credits the road traveled thus far for preparing him for the next level.

And the New York native’s path has been nearly flawless at that.

Save for a loss to Diego Brandao in the finals of the 14th season of The Ultimate Fighter - a scrap in which Bermudez certainly had his moments - the New Yorker has been perfect inside the Octagon. The 27-year-old Long Island MMA representative has rattled off an impressive seven consecutive victories on a run that has included wins over a collection of high-caliber opposition. His most recent performance was a steamrolling of perennial contender Clay Guida at UFC on FOX: Lawler vs. Brown back in July, where Bermudez manhandled “The Carpenter” in a fashion no fighter before him had ever been able to manage.

Yet, while his performance that night in San Jose put the MMA world on notice of his apparent arrival, Bermudez didn’t get caught up in the accolades and praise of the moment. In large part, this is due to his belief that he’s always been right where he needs to be, and at the current time, that place is within striking distance of the featherweight title.

Granted, he will need to fight his way past recent title challenger Ricardo Lamas this Saturday night for his championship hopes to further materialize, but it’s a challenge he’s pulsing with energy to get to. “The Bully” has been on his radar since toppling Guida, and while Bermudez respects the skills his opponent will bring into the Octagon this weekend in Mexico City, he is confident he will have the advantage wherever the fight goes.

And this is because his confidence has never been higher, which is precisely the type of result a tremendous winning streak at the highest level of competition will produce.

“This streak is definitely a very cool thing to have going,” Bermudez said. “It’s one of those things I look forward to telling my grandchildren about. I’ll say, ‘Well…when your grandpa was your age he was a fighter in the UFC and he couldn’t be beaten for 10 fights.’ The momentum is all very exciting, but I’m not satisfied with it yet. I’m not content with it, but at the same time, I’m not focusing on it either. I’m just trying to win my next fight. That’s always the goal.

When the cage door closes on the ruckus in Mexico City, Bermudez will mix it up with a fighter who is similar in many aspects of the game. The Chicago native is a hard-charging former wrestler who has parlayed his athletic gifts into a successful career in mixed martial arts. Lamas also knows a thing or two about putting winning streaks together and he strung together four consecutive victories to earn a shot at featherweight king Jose Aldo earlier this year.

While Lamas would ultimately come up short against the Brazilian phenom, he wasted no time getting things back on track by defeating Hacran Dias back in June. And while the former title challenger will be looking to get one step closer to another championship opportunity, Bermudez has an entirely different set of plans for Mexico City.

He believes it’s his time to shine and a victory over Lamas will make his case for a title shot difficult to deny. Bermudez isn’t under the assumption defeating Lamas will come easily, but he’s confident he’ll have what it takes to best his opponent in Mexico’s capital city on Saturday night.

“When I got the call to fight Lamas I was like, “Hell yeah…let’s do it,” Bermudez said. “My manager and I were looking at the strategy it was going to take to get me to the title after beating Clay Guida, and it was either going to be Ricardo Lamas or Dustin Poirier. Dustin signed on to fight [Conor] McGregor, which made Lamas the opponent that made the most sense. And we got the fight we were hoping for.

“Lamas and I are similar fighters. We both go in, hold the center of the Octagon and push a good pace. We both mix up our striking and wrestling well, but I feel like I’m a little bit better in all areas. The goal is to go in there, bring a super-hard pace and make the guy really question if he wants to be in there. I’m going to be in his face for 15 minutes, and over that time, my goal is to really make him think about quitting. I want to give him a reason to do that.”

Bermudez and his ever-evolving talents will be on display at UFC 180 and the future looks bright for the TUF alum turned potential title contender. He knows Lamas will be a tough customer on Saturday night, but a win over the former No. 1 contender, potentially his eighth consecutive victory, will put him in a place few fighters have stood. And Bermudez believes that status should secure a championship opportunity.

“1000 percent I believe a win over Lamas should earn me a title shot. The only fighters who have more consecutive wins than I do are champions and two of them are from New York. Give me a chance to join those guys.”