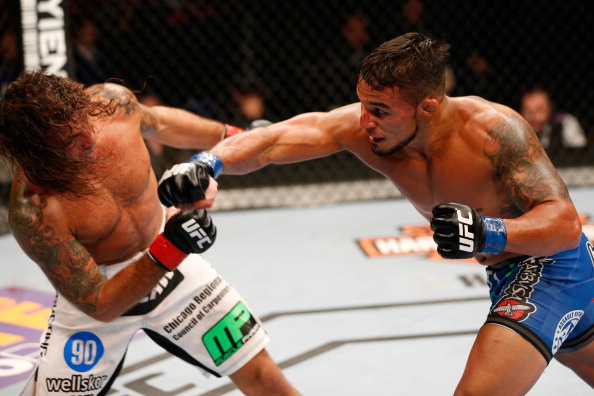 Featherweight contender Dennis Bermudez can appreciate the enormity of fighting on the main card of one of the biggest events of 2015. Just not until after his bout with Jeremy Stephens is over.

“I go out there and try to do the same thing every fight,” he said. “I really don’t try to think about how hyped it is and how many people are watching and money and all those things. My goal is to go out there, win, and when I’m back in the locker room or back at the hotel, go ‘wow, that was a sick card. There were a lot of people there.’ (Laughs) Then I let those things sink in. But before that, just get in there and get it done.”

That attitude has served the former Ultimate Fighter finalist well in his UFC career, whether he was fighting in New Jersey or Kentucky, Dallas or San Jose. He expected it to be the same thing when he stepped into the Octagon against Ricardo Lamas last November in Mexico City, but in a lesson learned, he realized that sometimes, you just get caught.

That’s what happened at UFC 180, as he saw his seven-fight winning streak snapped by “The Bully” via guillotine choke in the first round.

“I talked to my team directly after it, and I think if I had to fight him the next day, I would have been able to rock and roll and be mentally ready to fight him again and win,” Bermudez said. “What happened is part of the game. I came in a little aggressive and I got caught. No one’s invincible. I think I was trying to sprint – get in there, get after it and get the fight over as soon as possible. But you’ve got 15 minutes to work – take your time.”

There were no dark sunglasses, no mood swings, no long walks to clear his head after the bout. Did the loss hurt? Absolutely. But not enough to where he took his eye off the prize in order to sulk. In this game, you win or you lose, and no matter what happens, you have to get back in the gym and get back to work.

“I take my hat off to Ricardo,” Bermudez said. “He’s a tough fighter, he’s a good fighter. Do I think he’s better than me? No. But he did show it that night. I think I just got caught, it happened, and I’m not going to beat myself up over it, I’m just looking to move forward. Me sitting back and dwelling on that night is not going to help me get better.”

Plenty of work in gyms both at home in New York and on the west coast have served that purpose for “The Menace,” and while he hasn’t been in the Octagon since last fall, that doesn’t mean he stopped working.

“I was kind of doing a fight grind because at one point I was like ‘it’s been a while, it’s been over three, four months, they should be calling me any second now,’” he said. “Because I’m used to that repetition. So I was kind of getting fight ready. Some of my other buddies were getting ready for fights and I was right next to them, helping them, so if I got a call, I was going to be ready to rock and roll. So I’ve definitely been grinding, but I’ve been smart about it too and I think the break was good for my development and the timing is right now to get in here on July 11th and get after it.”

Currently ranked eighth at 145 pounds, Bermudez remains in the race for a shot at the belt with a win over the 11th-ranked Stephens, a hard-nosed veteran with even harder punches in his arsenal. But the New Yorker isn’t jumping too far into the future, even if he would be ready for anything if the call came.

“Talking with my team and stuff like that, I think realistically we beat Stephens we have to win one more and then we can start talking title,” he said. “But after a win over Stephens, if they were like ‘hey Dennis, you want a title shot,’ I’m not going to say no.”

And what better place to make a statement to the UFC brass and the rest of the division than at the MGM Grand, home to the biggest featherweight fight of this or any other year?

“If the eyes are on the featherweights, then there are more eyes on me,” he said. “So of course it’s a good thing.”