"I think it’s going to be a slugfest where both guys want to stand up and get after it." - Dennis Bermudez 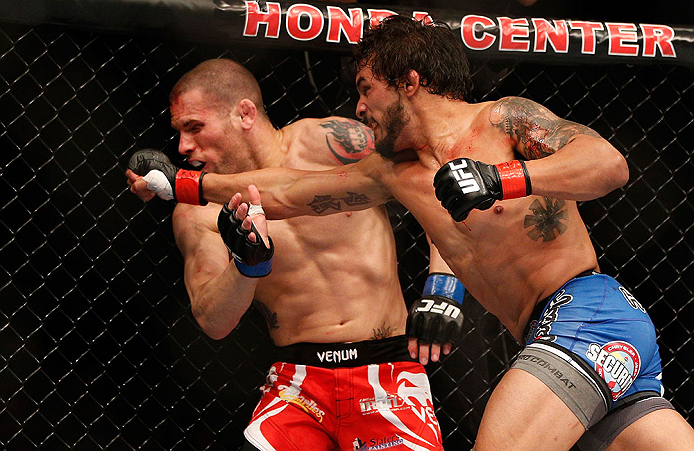 A young fighter trying to establish themselves in mixed martial arts will take progress in any form it comes. Whether their career moves forward as the result of a grinding, three round decision or a barn burning battle that demands every ounce of grit they have, as long as the needle moves north, the sacrifices were worthwhile.

After coming up short in his quest to become the winner of the 14th installment of The Ultimate Fighter, New York native Dennis Bermudez has blazed forward, refusing to take a step back. The 26-year-old has claimed three consecutive victories since his loss to Diego Brandao at the TUF Finale, looking more impressive with each outing.

This especially rings true for his most recent showing against Matt Grice at UFC 157 in February. The two featherweights locked-up in what became an early candidate for “Fight of the Year” as their raucous tilt stole the show in Anaheim. At the end of the back-and-forth affair, the former All-American wrestler edged out Grice to claim the split decision victory.
In the aftermath of the “Fight of the Night” performance, Bermudez suddenly realized the traction he had been hustling to find in the UFC fold was there for the taking.

“I think people who watch MMA are always wondering how we do what we do,” Bermudez said. “How we take hits and keep on coming. I personally never take a step back from where I start from. In that fight with Grice, I just locked down into ‘survival mode,’ where it was either him or me. It was going to be me and I pulled through and got the victory.

“In general, people overlook the lighter weight classes because they are new to the UFC. But things are changing and I think people are starting to look forward to seeing the lighter weights fight more than say the heavyweights. It is because we are way more active. We get in there and get after it. We bring 15 minutes of high-paced action. We throw a ton of strikes and there is a ton of movement. It’s exciting to watch.”

Nevertheless, a commonly used saying in mixed martial arts states “a fighter is only as good as his last fight,” and the next challenge for Bermudez is lurking just around the corner when he faces Max Holloway at UFC 160.

In order to keep the momentum rolling, the Lindenhurst-based fighter will have to halt the progress of the surging 21-year-old prospect. It is a challenge Bermudez is excited to get underway and he believes his style will prove too much for Holloway to handle.

“It’s a great matchup,” Bermudez said. “He’s more of a striker than a grappler. I think it’s going to be a slugfest where both guys want to stand up and get after it. I also have no problems taking the fight where I’m stronger and using my takedowns and my wrestling.

“It makes a huge difference - 1000%,” Bermudez added about his wrestling advantage. “I remember when I was first starting out and wrestling was all I had. If I had trouble taking a guy down it would kind of psyche me out. But now I’m okay with it because my striking has developed and I have other tools to use in the fight. At the beginning, wrestling was the only weapon I had to use. Now, I’m a more well-rounded fighter, and if I don’t get the takedown, I don’t get frustrated at all.

“I always try to bring an entertaining fight. I try to work a high-pace and try to get my opponent super-tired and take his will. I want to get in there and manhandle somebody. I’m going to keep trying to put on exciting fights and that’s what people are going to see in Las Vegas.”

With less than four years logged into MMA as a professional, Bermudez is still in the early stages of his mixed martial arts career. While the initial success has provided a tremendous confidence boost to tackle the challenges ahead, he fully understands there is still so much work to be done, and he has zero issues with putting in the sweat equity.

The sport to which he has now dedicated himself requires a fighter to constantly evolve and failure to do so will result with being passed up - or worse - by the competition that is shooting for the same goal at the end of the road.

Coming from a wrestling background has provided the foundation for Bermudez’s work ethic and he’s pushing it to the next level as a mixed martial artist. He hasn’t abandoned the skill set that made an MMA career possible, but he’s certainly looking to add weapons to his arsenal.

“I think a lot of guys abandon their wrestling as they start to develop their other skills,” Bermudez said. “That’s not me. My next practice today is going to Hofstra to wrestle and have a session where it’s strictly wrestling. They have tough guys there and I think that’s where a lot of my toughness comes from, just being in a Division I wrestling room where everybody is a stud where they come from. You have to hold your own inside that wrestling room and that is going to make you tougher for having gone through it. That experience definitely helped me become a mixed martial artist.

“My hands have been coming along. Every fight they have been improving. My jiu-jitsu is definitely increasing as well. But wrestling is always going to be my most dominant skill. I’m becoming a better all-around fighter but I’m always going to have a strong wrestling base.”

While the next challenge in his young career will come against Holloway at UFC 160, Bermudez has already defeated one of the biggest opponents he will face.

Since the inaugural season of The Ultimate Fighter in 2005, the competitors coming off the reality program have battled the stigma of being “TUF fighters” and not legitimate competitors in the UFC fold. Where a collection of notable participants have washed out in the past and served to strengthen this theory, there are those who persevere through and lose the label entirely. Bermudez believes he’s one of the lucky ones in this regard.

“I think there is a stigma attached to some of the guys who come off The Ultimate Fighter,” Bermudez added. “When you look at the show, you see half of the guys on there and wonder what they are even doing in the house. They wouldn’t even stand a chance in the UFC. But then there are a handful of guys who come off the show and become competitors in the UFC. I really think I’m one of those guys who was able to shake the TUF label and become a competitor.”