Demian Maia: One Step at a Time

"I know I need to remain focused and working hard towards my goal of
fighting for the belt at welterweight, and then becoming the champion." - Demian Maia 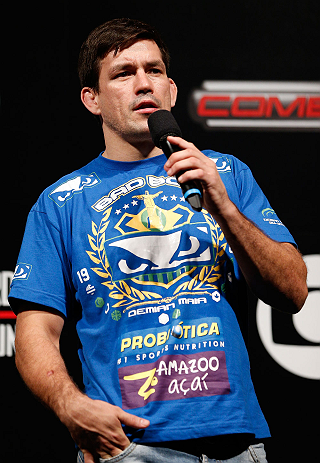 Timing is everything in mixed martial arts, not only in the Octagon, but outside it as well. So when you ask Demian Maia to describe the new lease on his fighting life that he got by dropping from middleweight to welterweight, it’s about more than just what’s gone on when the bell rings.

“It has been very good times so far, not only because of the move to the welterweight division, but also because of all the changes and transformations we have made in my career, both with training and with more PR emphasis here in Brazil, so it really brought a new perspective,” said Maia. “Mostly I'm happy with my performances in training and fighting, but I know in this sport it all can change so soon. One bad fight and people change the way they perceive you completely, and I know I need to remain focused and working hard towards my goal of fighting for the belt at welterweight, and then becoming the champion.”

A member of the 170-pound weight class since July of 2012, Maia has looked better than even in his new division, stopping Dong Hyun Kim in a single round, submitting Rick Story, and most recently taking a shutout decision win over former world title challenger Jon Fitch. In fact, he’s been so impressive, you have to wonder if Maia has ever thought about where his career would be if he moved down to 170 earlier.

“Well, obviously sometimes you think about it, but in reality I don't really think about things on these terms,” he said. “I mean, it's all a proccess and in life it's all dynamic, so I needed to pass through the things I went through at middleweight to be the fighter I am now, and it's all constantly moving. I think I had a good career as a middleweight, but the sport is changing all the time and evolving a lot, so the move to welterweight was needed and proving to be a good move. However, I think we are, as people, a product of all our experiences and all of those led me to be the welterweight fighter I am now. It's not only about dropping weight, but all of the changes in my training and how we work that we have made when I dropped to welterweight, and if I hadn't gone through all the experiences before I wouldn't likely have made those changes. So things happen when they have to happen, and I understand and appreciate this. It's better to focus on what's ahead.”

What’s ahead for Maia is a UFC Fight Night main event in Barueri, Brazil on Wednesday against Jake Shields. On paper, it’s a meeting between elite jiu-jitsu black belts that could push the winner into the title picture. Of course, we all know how fights on paper can end up in reality, but Maia isn’t feeling any heat to fight a certain way this week.

“I know people talk about how they would hate this to be an ugly kickboxing contest (Laughs), but a fight is a fight and it's always tough,” he said. “Jake has fought a lot of the best guys out there and always made a competitive fight, most of the times winning. So it goes to show that he is a crafty fighter that can adapt and make fights hard for anyone. I think fighting in the UFC is already a lot of pressure, and there's nothing more important than giving your best performance.”

Maia’s praise for the American doesn’t stop there, and the Sao Paulo native is clearly ready for the best version of Shields yet. And if he beats that version, big things are ahead for Maia.

“Jake is a great fighter and he presents all kinds of challenges,” he said. “Obviously, he is a great grappler and a solid wrestler, but sometimes people underestimate his striking. If you look at his record, he has fought and beat guys like Dan Henderson, Carlos Condit, Robbie Lawler, Yushin Okami, Martin Kampmann, Tyrone Woodley, and the list goes on. One way or another, he found ways to beat those guys, and he was able to made the fight competitive and a lot of times they ended up pretty much fighting a standup fight. So he surely finds ways to make the fight competitive wherever the fight goes, and is very experienced. I think he is a solid challenge for any fighter, with an impressive record that people underestimate a lot.”

That won’t be the case with Maia, whose own striking has come along nicely since his early days in the UFC, but let’s not mince words: with Maia and Shields, diehard fans want to see some jiu-jitsu, and if there are those out there who think such a battle would result in a boring five rounder, look no further than Maia’s 2008 battle with Jason MacDonald, which showed off the best parts of the mat game for nearly 13 minutes before Maia finished off the Canadian in the third round. If you watched the two trade submissions consistently over the course of the fast-paced contest, you had to be impressed.

“I think my fight with Jake has the potential to really be an exciting fight, but it's impossible to know for sure how it'll play out,” said Maia when reminded of the McDonald bout. “I know I have to be ready to fight wherever the fight takes us, and I think it'll be a very exciting fight. I remember the fight with McDonald as a great learning experience because it was my first fight to go to the third round, and that alone was a new and important experience for me back then.”

A lot has happened since then for the 35-year-old veteran. He defeated Chael Sonnen in a single round, suffered the first loss of his career to Nate Marquardt, went five rounds in a title fight with Anderson Silva, and fought five more times at 185 before beginning a new chapter in his career at welterweight. Now, he’s the main event in his home country.

“I really enjoy being in the main event and it's one of those things that shows to you that you're really getting closer to your goals,” said Maia. “Mostly, doing the main event at home means a lot, as we have been working hard to win fights and increase my exposure with the fans here in Brazil, and doing a lot of media. Being in the main event on a card here, and knowing ticket sales are going very well, it's a big incentive to keep working hard. But all of that matters little if you don't win the fight, and that's the focus now. In the end, although there are more responsibilities of promoting the show and all of that, this is part of the business, and like I said, a great part, as it means you're doing well. Pressure will always be there, and you have to be able to deal with it and organize your work to handle it.”

It also means focusing on that task at hand, with no looking beyond October 9th.

“I don't want to look ahead of Jake,” said Maia. “He is a great fighter, a former contender in the UFC and a Strikeforce champion. I need to focus on winning this fight and then hopefully I'll be able to achieve another goal.”