"I'm at a stage in my career in which there's not really much time to waste and I have to test myself against the best guys." - Demian Maia 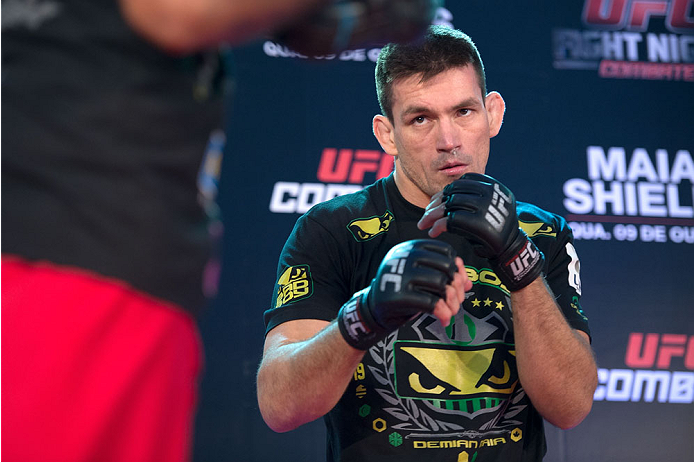 Though he’s a proud native of Brazil, Demian Maia has no problem taking his show on the road, especially if that road leads him to Las Vegas, a place where he is unbeaten in five fights.That’s not to say the welterweight contender from Sao Paulo is superstitious.

“We joke about that in the gym sometimes (Laughs), but it's not something that I seriously think about, as fights are fights and things can change anytime,” said Maia, who returns to Vegas this Saturday to face Rory MacDonald. “If you start to believe in that, and neglect what really matters, you will end up losing. With that said, Las Vegas is the home of the UFC, it’s the fight capital of the world and I feel very comfortable fighting there. I would say I have some little rituals before warming up before a fight, stuff like that, but nothing really superstitious; it's more something you got used to doing and it helps set your mindset properly to fight.”

After more than 12 years and 23 pro fights, the 36-year-old Maia is no longer the “jiu-jitsu guy” on fight night. He’s a mixed martial artist, one of the best in the sport, and with wins in three of his four fights at 170 pounds, he has new life in the Octagon as a welterweight. That doesn’t mean everything always goes right though, and last October, he suffered his first loss in his new division, a razor-thin five round split decision to Jake Shields. It was one of those fights that could have gone either way, and if it went Maia’s way, he could have been on the short list of contenders for the title vacated by Georges St-Pierre. But in a game of inches, sometimes things sway in the other corner’s favor. It’s a part of the fighting life that Maia has come to accept.

“Well, Jake is a great fighter, I have a lot of respect for him, and in a sense he is a different challenge on his own, and one of the biggest challenges there is,” said Maia. “A lot of times people see his fighting style and expect his opponent to win immediately, but look at the guy's record - it speaks for itself. He has some impressive wins and I have to congratulate him for a great game plan, composure and strong mindset during the fight. It was an extremely close fight; I think I had some moments and he was able to control longer periods of the fight and play with the rules, which is absolutely fair. Life goes on and I have to focus on the future now.”

That future is rapidly approaching in the form of this weekend’s UFC 170 battle with MacDonald. It’s a high-profile and highly intriguing matchup, one that will have a significant impact on the welterweight scene. Yet another point to be made is that despite Maia’s loss to Shields in their UFC Fight Night main event, he returns this Saturday to the Pay-Per-View main card, a strong vote of confidence for the Brazilian veteran.

“It means a lot,” said Maia. “After the frustration of losing the fight in Brazil against Shields, my manager (Eduardo Alonso) asked (UFC matchmaker) Joe (Silva) if I could fight as soon as possible. He even offered me as a replacement for Kelvin (Gastelum) at UFC on FOX in December, but that was tough, of course, as the fights have to make sense and there are a lot of guys needing fights at 170 pounds. So in the end it worked out for the best, as I'm at a stage in my career in which there's not really much time to waste and I have to test myself against the best guys. Rory is an incredible talent and most likely a future champion down the road, so it's a fight with a bigger meaning, and, regardless of outcome, I think it's a great challenge for both of us. I don't think I got any easy fights at welterweight, with Kim (Dong Hyun), (Rick) Story, (Jon) Fitch, Shields and now Rory. This is such a competitive and tough division that I appreciate the UFC giving me those fights.”

A mentality like that is something a fighter is born with. You can’t learn it in a gym or develop it over time. You either want to test yourself against the best night in and night out or you don’t. Maia wants those tests, and there may not be one tougher for him at the moment in the division than MacDonald, the longtime heir apparent to the throne who is coming off a setback of his own, an upset decision loss to Robbie Lawler. It was a shocking result to many, but not to Maia.

“I wasn't, but not because Rory is not a great fighter, but because Lawler is also another very dangerous fighter and a very experienced guy,” he said. “He (Lawler) has been in there with everybody, and what people don't realize sometimes is that in high-profile fights like that, anyone can win or lose on any given day. That's the beauty of the UFC. There are no easy fights for anyone, and the competition is extremely tough, especially at 170 pounds and in some other weight classes. I think among the top 10 guys at welterweight, anyone can become a title contender on any given day, depending on a couple of fights’ outcomes and some circumstances here and there.”

He’s right, and after St-Pierre defeated Johny Hendricks and vacated the title late last year, it was Hendricks and the man who beat MacDonald – Lawler – who will fight for the belt next month in Dallas. Maia is non-committal when it comes to picking either a winner or who he would eventually prefer to face between “Bigg Rigg” and “Ruthless.”

“I can't really think about that right now, as nothing will make sense if I don't win against Rory, which is a very tough fight in itself,” he said. “Both Hendricks and Lawler are great fighters and present similar challenges for anyone, being heavy-handed and great aggressive fighters, with Hendricks likely being the better wrestler, even though I also think Lawler's wrestling might be underestimated.”

A topic Maia does readily agree to discuss is the departure of GSP, something that opened up the welterweight division for a hungry group of contenders aiming for the top.

“I have a lot of respect for GSP,” he said. “I think he is a great fighter, and was a great champion for our sport. It (his hiatus) is one of those things that only he knows what he was going through, and his reasons for it, and I think we have to respect that and I admire him for the career he had and having left the sport on top. Still, it's early to say if he will stay retired or come back. At a first glance it might open up doors to other contenders fight for the belt quicker, but it's not something we can think a lot about because GSP might come back and fight for the belt right away, and rightfully so. So the only thing we can really do to help our cause for a title shot is to keep winning fights.”

Next stop for Maia? Las Vegas and Rory MacDonald. As for everything else, Maia has learned that the best course of action is to do his job and let the rest of the chips fall where they may.

“Defeating Rory is not an easy task and I got to do it before I think about anything else,” he said. “I think either Rory or I can be both at so many different places after this fight, depending on who wins or loses, and what happens in other fights, or the injuries that take place. So the best thing is to focus on the fight and see what happens.”