Check out the event page of Fight Night Rio to get more information about Demian Maia vs. Ryan LaFlare & more. Click Here 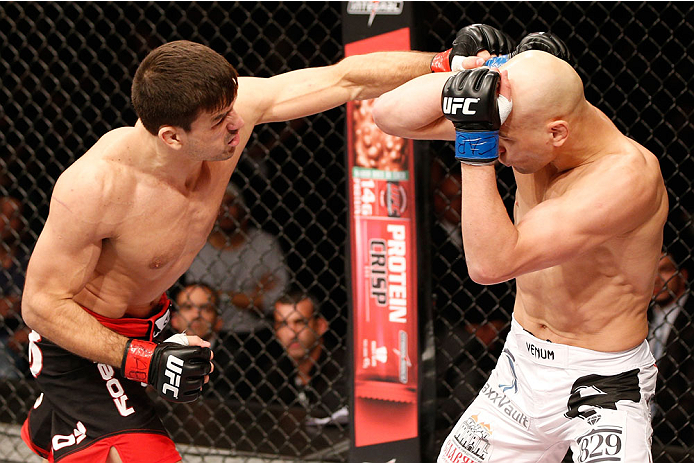 Considered to be one of the best pure Brazilian Jiu-Jitsu players in the UFC, an unofficial accolade that has been part of his resume since his Octagon debut in 2007, Demian Maia is also one of the most notable representatives of what has been described as “The Gentle Art.”

The Sao Paulo native has an even-keeled personality and a courteous demeanor that often seems out of sorts with the world of prizefighting. So it comes as a bit of a surprise that when Maia was growing up, his reason for taking up Jiu-Jitsu was merely as a gateway to his real goal of fighting in Vale Tudo.

“I loved fighting and martial arts in general,” Maia said of his early days. “I started with Kung Fu and did some Judo, but I loved Vale Tudo and the first UFCs when I first saw it, and I couldn't help but to admire Royce Gracie from what he was doing. That got me to Jiu-Jitsu, as I wanted to be the best I could and wanted to compete in Vale Tudo, and he was showing how important BJJ was for that. So I got into BJJ and then I got very attracted by the emphasis on skills, and how much thinking was involved into this game. I fell in love with it and could never stop.” 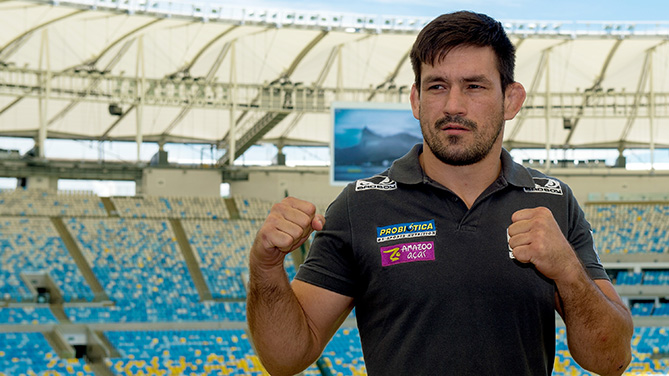 UFC Rio Open Workouts " width="300px" height="NaN" align="right" />Jiu-Jitsu became Maia’s home, with his dedication to the art leading to a black belt and a laundry list of medals and championships, but his dream of taking off the gi and adding punches and kicks to the mix never went away, and eventually it would become a reality.

“I fell in love with Jiu-Jitsu and started to compete, but I always had the Vale Tudo dream in my mind,” he said. “But you never really stop to really imagine that you will be there doing this in this way some years down the road. You dream of it but you just go with the flow and keep trying to be the best you can, and the rest comes naturally. When you least expect this, it slowly takes over and becomes your life, and it's one step after the other.”

Several steps later, and Maia is not just carrying on his form of the Vale Tudo tradition in the Octagon as a top welterweight contender, but on Saturday, his UFC Fight Night main event will be taking place in what can be rightfully considered hallowed ground for Brazilian Vale Tudo, Rio de Janeiro’s Ginasio do Maracanazinho. This is an honor not lost on the 37-year-old Maia.

“The first thing I thought when my manager (Eduardo Alonso) told me that this fight would be in Maracanazinho is about the Vale Tudo history with legendary BJJ representatives there. Way back, I mean Helio Gracie, Carlson Gracie, Rickson Gracie, they all fought there representing Jiu-Jitsu in legendary fights, and it's such a motivation and a special meaning to me to be able to fight there as well in a main event. I competed there in BJJ, and I fought in Rio for the UFC before, but to fight in Rio for the UFC, in a main event at this arena, is certainly something that makes me proud.”

> Check out the Maia vs. LaFlare fight breakdown 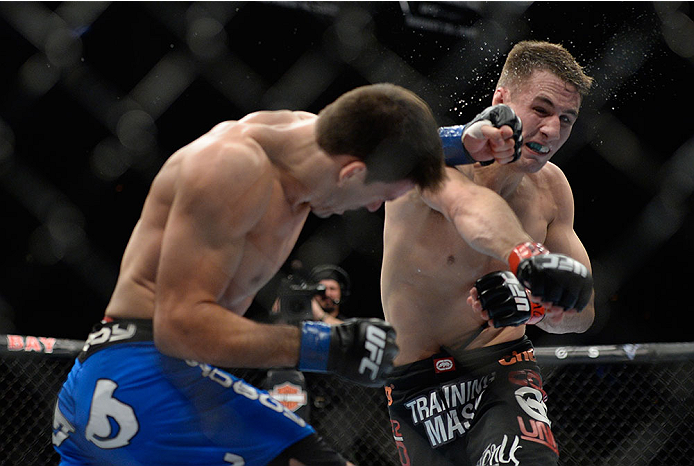 Rory MacDonald" width="300px" height="NaN" align="left" />Maia has come a long way to get to this point, but the road doesn’t end at Maracanazinho. Currently ranked seventh in the world at 170 pounds, the former world middleweight title challenger has won four of six bouts at welterweight, most recently a May 2014 decision over Alexander Yakovlev. A victory over the unbeaten LaFlare (ranked #14) won’t propel Maia into the heated title race, but that doesn’t matter because he’s not thinking that far ahead anyway.

“I can't really think of that,” he said. “He (LaFlare) is a very tough fighter, and I know this is will be a very tough fight for both of us. We were training for a three-round fight, and we were lucky enough to be bumped up to a main event and suddenly it became a five-round fight, and it's a big deal for both of us. The division is stacked and any of the top 15 guys can beat each other on a good night. So first, I have to win against LaFlare, and then I can see where this takes me. One step at a time.”

What Maia will spend some time thinking about is LaFlare and the tools the New Yorker brings to the Octagon on fight night. He’s solid everywhere the fight goes, but the biggest danger for Maia might come from the intangibles LaFlare possesses, namely, he doesn’t know how to lose yet. Ironically, Maia made it to 11-0 as a pro before losing his perfect record to Nate Marquardt in 2009. LaFlare is 11-0, and the Brazilian remembers what it’s like to be in the position his opponent is in.

“When you are undefeated and everything is going right for you, you get that sense that you will never lose and things will always happen in a good way,” Maia said. “Which is actually good for a fighter if you can find balance, because it makes you more confident and you end up taking more risks, which generally can lead to wins. But like I said, you have to find balance because sometimes it also leads to a new reality as the level of opponents and amount of pressure only increases. I don't think that's the case with LaFlare though, he seems like a very experienced and down-to-earth guy, and he has been in hard fights before so I don't think being undefeated made him wild or less aware. For me, personally, the loss was a good thing because it made me take a good look at myself and go try to improve in lots of areas, becoming a better and more solid fighter.” 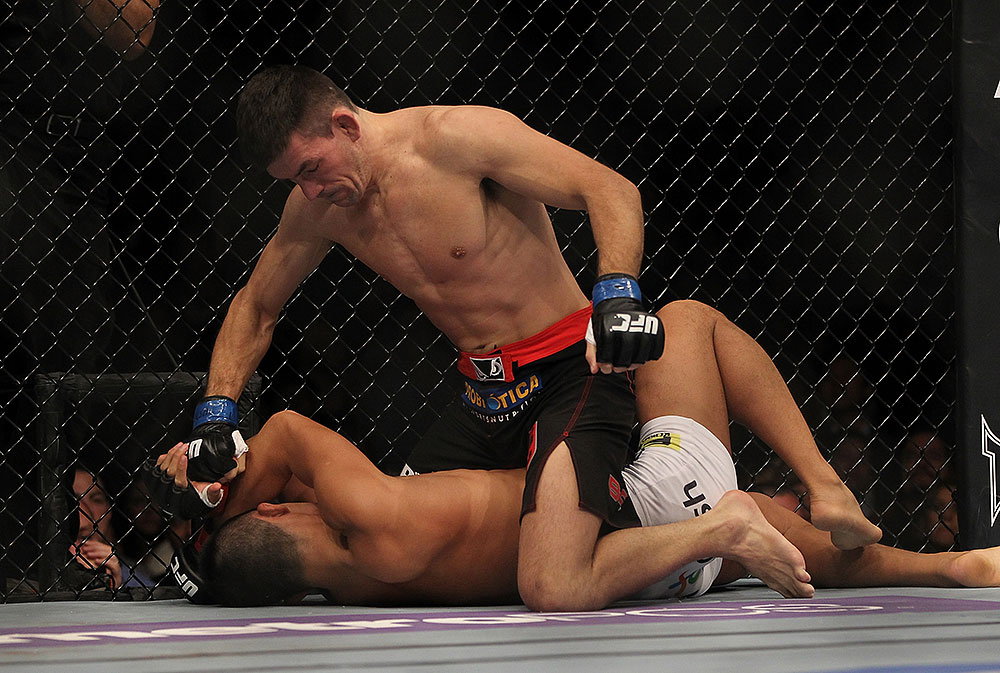 Dong Hyun Kim" width="300px" height="NaN" align="right" />Maia, who submitted each of his five previous foes in the UFC before losing to Marquardt, did go back to the woodshed and add striking and wrestling to his game, allowing him to not just stick around for the ensuing years, but to excel. And for him, the learning process never stopped and never will, lessons he likely taught those he helped coach in Las Vegas as an assistant to “Shogun” Rua on the upcoming season of The Ultimate Fighter Brazil.

“I had done some camps in Vegas before in the past, but this time it was a different situation,” Maia said. “My whole team was going to be in Vegas to shoot TUF, and I was invited to also be part of it on Team Shogun. My manager and head coach, Eduardo, arranged a schedule around it so I could train and not be needed on set filming often, but I still got to be part of it and around my team. It was good because we were able to bring in some new training partners like Evan Dunham, wrestlers like Kyle Griffin and Kody Hamrah, as well as train again with old friends like Robert Drysdale, among others. It was also interesting because I was able to interact a lot with the kids on TUF, and they were very talented and nice kids. I got to see their motivation, and interacting and training with kids that are starting this and still after their dreams, with that fire in the their eyes and eager to learn and be part of everything was a great experience. It served to also put things in perspective for me, and remind me of all we did, and all I want to do.”

Maia doesn’t go into specifics when asked about his outlook for the year, but that’s just the sign of a veteran, someone who knows how quickly this sport can change on the result of one fight. So he’ll keep it broad by maintaining the attitude that took him to this place in his career.

“A perfect 2015 is just to be able to keep doing what I love, which is fighting, representing BJJ and being able to perform at my best in the UFC and always becoming a better fighter,” he said. “Winning is a consequence of that, and if that goes on, naturally I'll achieve my goals. But it all starts with being healthy, and being able to be do what you love in the best possible way.”