Demian Maia: It's all in the Details

"That's the tough thing about the sport, you can only know how things are
gonna go for real on fight night, and many details matter." - Demian Maia 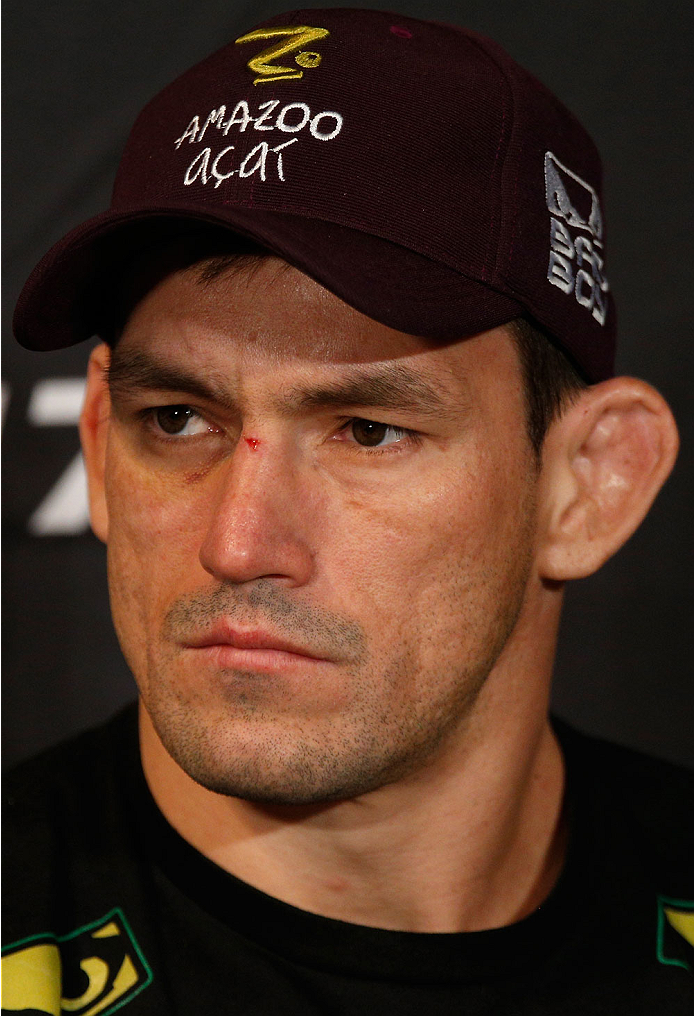 Everybody in the UFC can fight. That’s an established fact. But what separates the haves from the have nots in every division is a matter of inches and details. No one knows this better than former world middleweight title challenger and current welterweight contender Demian Maia.

Riding high with a three-fight winning streak after moving to the 170-pound weight class, the Brazilian has now lost two straight heading into his Saturday matchup with Russian newcomer Alexander Yakovlev on the TUF Brazil 3 Finale card. That’s the nuts and bolts of the situation, but it doesn’t tell the whole story. Remember, details.

In his October 2013 match with fellow grappler Jake Shields, Maia lost a five-round split decision many believe he won. In his next bout, a decision defeat against Rory MacDonald at UFC 170 in February, he picked up Fight of the Night honors. Two losses, but two vastly different fights that don’t really seem like your average losses if you look a little deeper. And Maia had.

“That's what is really tough about this sport, and shows how competitive the UFC is,” said Maia. “Mostly when you are fighting top fighters, a little detail here and there and I could be in a completely different situation right now. But it goes both ways, and I can't take merit away from my opponents. That's why we fight. But that's what’s tricky; I don't think both last fights were actually bad fights, so you have to look at the spots where you can adjust and improve things, and also not throw away all the good things you have been doing.”

And Maia has been doing good things since dropping 15 pounds to swim with the welterweight sharks. He’s already beaten top-notch competition in Dong Hyun Kim, Rick Story, and Jon Fitch, and he showed he could hang with the highly-regarded MacDonald before running out of gas late.

“The Rory fight was Fight of the Night, and I think we both dominated a round and the last round ended up being an effort and he came out on top,” he said. “Major props to him, he is a very tough opponent and I look at that fight happy that I gave my all, and I’m trying to improve on the points I failed at in that fight. Against Rory we recognized some mistakes, I think I didn't start camp as fit as I usually do, and that cost us a bit, and so we did some tweaks in our training camp this time and we have to fight again to see what happens. That's the tough thing about the sport, you can only know how things are gonna go for real on fight night, and many details matter.”

That’s for sure, but if anything, Maia’s stock remained steady after the MacDonald fight, and even after the loss to Shields, one that he has accepted gracefully but that is still a sore point.

“For me, personally, the Shields fight was more frustrating because I think I won that fight,” he said. “I know I could maybe have pushed it more, and I did make some mistakes here and there that helped change things, but still I can't agree with the judges' call as I can't agree on why they scored the fifth round to him, and that was what decided the fight. That's really frustrating, but I also don't want to take anything away from Shields who did his best and doesn't make the decisions.”

That response is typical of the 36-year-old from Sao Paulo, who remains one of the sport’s classiest practitioners. That’s an important facet of his personality to point out because even though the sport is accepted throughout the world in ways we couldn’t have imagined a decade ago, fighters still get a bad rap in some segments of society. Maia wants to help change that perception.

“I think being respectful is everybody's obligation, and like I said, it’s the only way to get our sport to be respected and truly accepted everywhere,” he said. “We progressed a lot, but there's much more to be done. I'm a BJJ teacher myself, even though I don't have time to teach classes now, and I know the responsibility of giving a good example to my students and forming not only good fighters, but mostly helping to form good people. More than that, I'm a father of two children, and it is everybody's responsibility to give good examples to help form a better society, and when you have a country like Brazil, which I love but still lacks in many citizenship aspects, and sports that I love like BJJ and MMA that still need to be accepted in some circles, you have to do your share as a person and a citizen and try to give a good example of respect. I think it's nothing more than everybody's obligation, and I'm very happy people see me this way.”

That admiration doesn’t just come from folks outside the game, but from the fans of MMA and Maia’s own peers, a sign of respect not lost on a fighter who has always carried himself like a gentleman in and out of the Octagon.

“It means a lot,” he said. “I appreciate the respect from fighters and fans, and I also respect every fighter in the game, as well as the fans, as I know how hard it is to make this your profession, and also how much the fans mean in our job. They are the reason that this all happens, and it's not an easy business at all. I feel it's my obligation to represent Jiu-Jitsu, the UFC and MMA with respect as both BJJ and MMA already get an unfair bad reputation due to ignorance by some people, or non-proper behavior by a minority of those in our sport. It's hard enough to get respected and we progressed a lot with the work of great people in the last few years, but we have to keep acting like true professionals and respecting everybody to allow our sports to continue to grow and get to the level we deserve.”

Having said that, it’s no surprise that when Maia’s opponent for this Saturday’s fight in his home city changed from Mike Pierce to the relatively unknown Yakovlev, he took the switch in stride, chalking it up as just a part of the game that all fighters have to deal with.

“It altered things a little bit, of course,” he said. “It always does, as they are two completely different opponents. Yakovlev is a southpaw, he’s much taller, and has a different fighting style than Pierce. With that, of course, you need different types of training partners and southpaws aren't so easy to find. I remember we were just starting a trip to train when the change happened, and we started to adapt as soon as possible. But in the end, being in the UFC you have to be prepared because everybody will be tough anyways.”

It’s clear that Maia isn’t overlooking Yakovlev, and even though a win over the newcomer may not move him up the welterweight rankings like a victory over Pierce or another more established UFC name, that’s something that isn’t even crossing his mind heading into this weekend.

“Not at all,” said Maia. “I can't think about these type of things. Any fighter that fights in the UFC is tough, and he (Yakovlev) recently beat Paul Daley, who once was a serious UFC contender at welterweight. Right now, coming off two fights where I lost, despite the way they were, and fighting in my hometown, the most important thing for me is winning the fight. It could be any opponent, and winning would be the most important thing, and we can't think of anything else right now besides doing our best and putting all we trained to work on fight night. I know it's going to be a tough fight, so that's all what's on my mind right now.”

And not his next fight after Yakovlev, which will mark his 20th in the UFC? There’s no big celebration planned?

“Well, you’ve got to ask Joe Silva and Dana White that,” Maia laughs. “At this point I'm just focused on number 19. It would be a privilege to do my 20th fight in the UFC, but it would also be foolish to think about it before doing my 19th, and my focus right now is only on Yakovlev and May 31st.”