Demian Maia - Go Ahead, Punch Him in The Face

“I really believe that martial arts and competing at a higher level is something spiritual. You learn about yourself every day." - Demian Maia 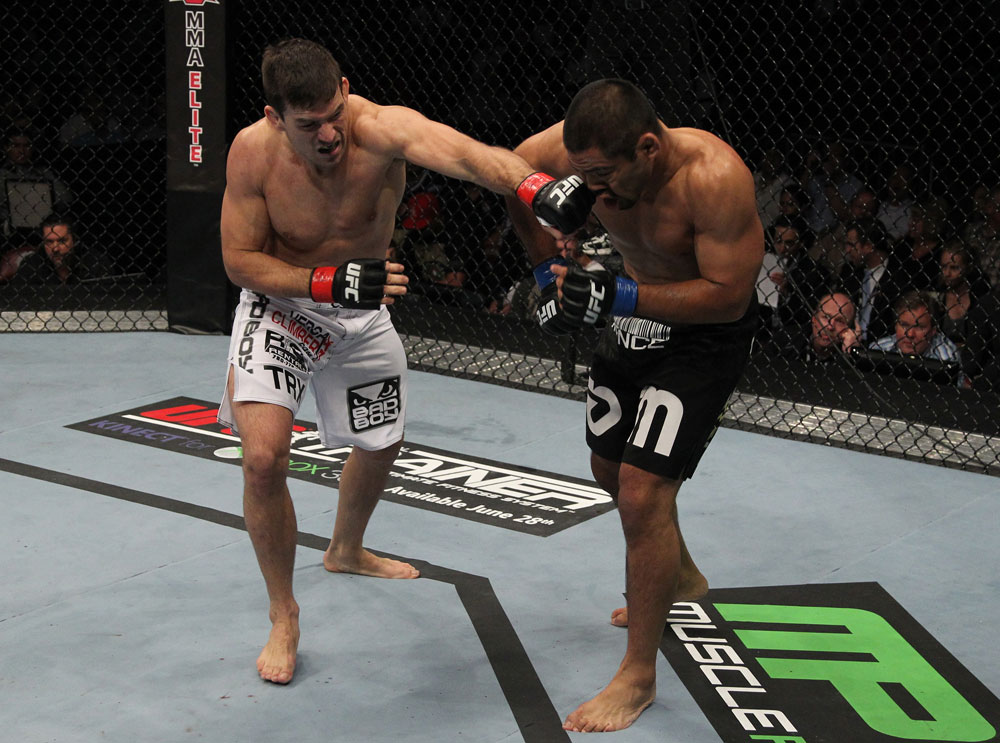 The popular stereotype about ‘punching jiu-jitsu guys in the face’ and watching them wilt under fistic fire hasn’t held true for Demian Maia, as evidenced by his 14-3 MMA record and multiple triumphs over elite fighters. A decade into his pro career, however, the five-time BJJ world champ readily admits that being popped in the face still isn’t something he looks forward to.

“Do you know somebody who likes to be punched in the face?” the 33-year-old cleverly retorted a little more than a week before his UFC 136 showdown with Jorge Santiago (23-9), inspiring a chuckle from his interrogator. “I think nobody likes being punched in the face -- not even boxers or kickboxers. But just as people say that about jiu-jitsu fighters, we can also say that about boxers and kickboxers who just train striking; after the first takedown they become nothing on the ground.

“Nobody is comfortable being punched in the face. But getting used to that in a fight, it took me like a year and a half of training standup to get to that point, to not blink when you get punched.”

Ironically, it was Maia, of all people, who cracked UFC middleweight champ Anderson Silva in the face as hard as anyone ever has inside of the Octagon – and that is a rare distinction considering that Silva is 14-0 in the UFC and almost always leaves the cage virtually unscathed. The unheralded southpaw raised eyebrows when he thumped Silva’s chin with several hard blows during their title clash last year in Abu Dhabi (though the challenger still came out on the wrong end of a five-round decision because “The Spider” wisely dared not test his luck against the grappling wizard on the ground).

“It was a hard fight but I was able to stand with him for five rounds,” Maia said. “I know that I’m not the best standing up so that gave me more confidence.”

Maia, who hails from Sao Paolo, Brazil’s largest city, has been a globetrotter in his burning quest to become UFC champion. He has spent weeks in Holland studying Thai boxing, journeyed to Chicago to study wrestling with Midwesterners, trained with Wanderlei Silva in Las Vegas and lived for four months in San Diego to take advantage of one of the MMA’s most talent-rich metropolis’.

Following a decision loss to Mark Munoz in June, Maia returned to his homeland, where his training camp includes the likes of No.1 heavyweight contender Junior dos Santos. The middleweight knows his limits when training with the heavy-handed 235-pounder.

“We don’t train boxing,” Maia noted. “He’s too big and punches too hard. I might lose some neurons punching with him.”

Maia is, after all, a highly cerebral and conscientious athlete. He studied journalism in college and earned a degree. But there was never any suspense regarding his career path. There are many fighters, particularly in Brazil, who are poor and faced with limited opportunities. These fighters face a dearth of opportunities. Fighting for them is akin to playing a lottery of sorts. The sport represents a legal way out – possibly – the chance to flee a ghetto overrun with desperation and despair. It is successful pro fighter or bust for so many poor Brazilian kids. Raised in a middle-class family, Maia nevertheless attended good private schools for much of his life and was fortunate to have parents who emphasized and preached the merits of education. He could have been a journalist, but his like for writing paled in comparison to his love for fighting.

The thrill of fighting is not rooted in the ego gratification of administering a butt-kicking. For Maia, it is more about self-discovery and self-revelation. It is about cultivating poise under pressure and mind evolution and expansion.

“I really believe that martial arts and competing at a higher level is something spiritual,” Maia said. “You learn about yourself every day. It’s hard to explain in English. It’s not just fighting, it’s something much deeper. Every time I go to fight it’s a big challenge and this helps me to control myself and overcome my fears. It’s very special and brings you nearer to something spiritual. You become a better person.”

Maia’s most famous proclamation, for journalists at least, is his ideal of the perfect fight: “To submit my opponent without him hurting me or me hurting him,” says the soft-spoken man who thinks of jiu-jitsu more as science than sport.

“Fighting for me is a chess game,” said Maia, who counts the legendary Rickson Gracie as a hero. “I’m not angry with my opponent. I just want to go in there and win without him hurting me or me hurting him.”

Maia’s ideals played out perfectly through his first five UFC bouts – he submitted all of his foes, including Chael Sonnen. Since then, he has gone 3-3 in the Octagon without a finish – the longest drought of his career. His recent opponents have included four BJJ black belts, a past NCAA Division I wrestling champ (Munoz) and another gifted grappler in Kendall Grove.

Jorge Santiago is also a BJJ black belt and Maia’s best guess is that Santiago will prefer a standup duel.

“He’s very complete,” Maia said of Santiago. “Ever since my loss to Nate Marquardt I focused a lot on my standup. MMA is a complicated game because it’s hard to keep the balance (between martial arts). So at one point I trained a lot more standing and less jiu-jitsu and I lost a little rhythm on the ground. I’ve been trying to get my focus onto jiu-jitsu again.”

Robert Drysdale, himself a six-time BJJ world champ and former teammate of Maia’s, pegs Maia’s Brazilian jiu-jitsu skills as tops in the UFC. The Demian Maia he knows is “extremely mentally tough,” the kind of supremely confident fighter who quickly forgets his defeats and refocuses his mind toward bigger goals and objectives. And it’s that kind of confidence and constant evolution that could spell trouble for Jorge Santiago come Oct. 8 in Houston.