It should have been celebration time for Demetrious Johnson, but the UFC flyweight champion isn’t built that way.

So when asked during a pre-UFC 194 media day in Las Vegas if Ronda Rousey’s November loss to Holly Holm cleared the way for “Mighty Mouse” to be declared the most dominant champion in the UFC, a debate followed in which he spoke of Rousey’s body of work, as well as that of champions in other sports such as Serena Williams.

In short, he wasn’t about to crown himself, but that won’t stop the rest of the world from making that call, and the media made their intentions clear when they voted the Washington product the best pound-for-pound fighter in the UFC.

And if you badger the 29-year-old long enough, he’ll begrudgingly take such praise. 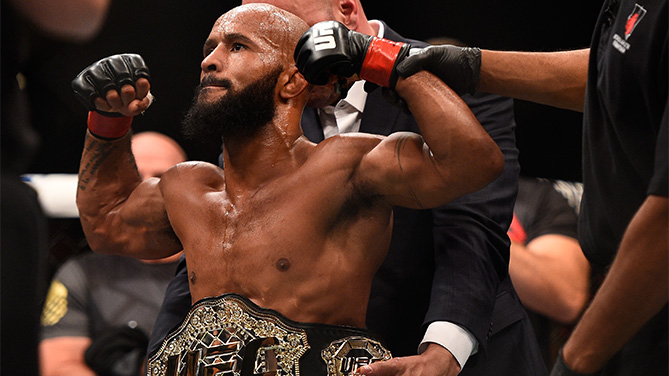 “If you want to go by now, I would say I probably am (the most dominant), because I've beaten two of the most marquee guys in the flyweight division, (John) Dodson and Joseph Benavidez, twice, and impressively,” he said.

“So I can say that the guys I've faced, with what they've done to their opponents and their record combined, I can say yeah, but Ronda Rousey's done amazing things. I haven't finished somebody in 16 seconds. So you have to pay homage to that and respect that.”

That’s not just class, not just humility. For Johnson, it’s a way of life, and perhaps the main reason why he’s practically cleaned out the 125-pound weight class, with 2015 wins over Dodson and Kyoji Horiguchi pushing his successful title defense streak to seven,

That’s not something anyone ever enters the world of combat sports with in their mind, but experience will teach you that no one ever gets out of MMA without a loss, especially if you’re competing at the highest level. That doesn’t make losing any easier, but oddly enough, having that feeling in the back of your head can free a fighter up to be at his best when the bell rings.

“There was a point in time when I never thought I was going to lose in wrestling,” Johnson explains. “I went my whole senior year, never got scored on, got to State, came across this guy who was a freshman, and he rolled me up and pinned me. I bawled my eyes out.

"I got into mixed martial arts, went to every jiu-jitsu tournament, won. Muay Thai fights, won. Boxing fights, won. Kickboxing, shootboxing, won. Came across a man called Brad Pickett (in the WEC), I broke my hand and he beat me. Cried on my couch and said I don't ever want to feel this ever again. Went on a streak, got beat by Dominick Cruz, looked at myself in the mirror, and was like "f*****k." Dude, losing's part of the sport. Look at Cro Cop, Fedor, Shogun, Wanderlei Silva, all of the greats. Ronda Rousey. If you're in this sport long enough, it's going to happen.”

Yet the funny thing is, while other champions have vulnerabilities that you can see being exploited, Johnson doesn’t appear to have any. He is looking more dominant in each fight, and as 2016 dawns, the only contender on the horizon who is in the title picture that he hasn’t defeated is unbeaten Henry Cejudo. But even Johnson admits that until Cejudo has fought him or one of the big three he has faced, we really don’t know what “The Messenger” really has.

“Dodson or Joseph Benavidez are always going to be rough nights,” Johnson said. “Even though the last one wasn't as rough as people think, there's also another mental battle going on and other stuff that you don't see. But I know that each time I fight those guys, it's going to be a rough night.

"We can never really test how good somebody really is until I see them fight either Ian McCall, Joseph Benavidez or John Dodson, or until you fight me. That's how I feel. I still make mistakes, but I fought those guys and we hold those guys higher on a pedestal because they've done amazing things in their career. Those are the big sharks. So until you fight those guys, you never know how truly good that person is. People may take offense to that, but that's how I look at it.”