Demetrious Johnson: Time to Go Back to Work

"I think it’s going to be a great fight between John and me because we
both have great skill sets, and we’re just going to have to find out
January 26th and see what happens." - Demetrious Johnson 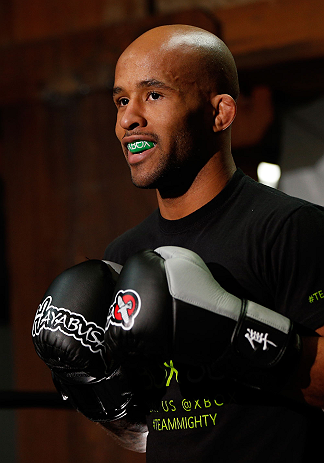 He won’t change either.

It’s not in his nature; it’s not who he is, even though the public perception of “who he is” underwent a major makeover back in September.

Four months ago, Johnson made history, becoming the inaugural UFC flyweight champion when he earned a split decision win over Joseph Benavidez at UFC 152 in Toronto. The victory vaulted the 26-year-old Washington resident to new levels of recognition, and earned him a place in the pantheon of the sport’s elite.

Saturday night, the man known as “Mighty Mouse” will step into the cage to defend his title for the first time, squaring off with former Ultimate Fighter winner John Dodson in the main event of the UFC’s first event on FOX in 2013.

Headlining a nationally televised fight card on network TV is another new perk for Johnson, but just like everything else that has come with winning the title, the humble flyweight titleholder is taking it all in stride.

“FOX is a huge, national broadcast out to lots of people, and I love that, but for me, it doesn’t change anything,” said Johnson. “I’m going to go out there and fight. I told somebody that if I were fighting on PBS, I would still fight the same. A fight is a fight, whether the title is on the line or not. I’m ready to go out there and do my thing. Go to work.

“The belt is just a token of (something I accomplished) in my mixed martial arts career. I made history, and no one can ever take that away from me. Now I’m just looking forward to beating people.”

For some athletes, reaching the pinnacle of their profession can foster a sense of complacency. Having achieved their ultimate dream, the intensity and focus that carried them to the top of the mountain doesn’t always remain once they start to enjoy the view. The expectations, responsibilities, and opportunities that come with being a champion start to take away from time spent in the gym.

In a sport where the difference between victory and defeat can be a fraction of a second or the slightest head movement, even a momentary pause to indulge in the perks and privileges afforded to superstars and champions can have an impact.

That’s why despite his championship victory, Johnson has remained as committed as ever, driven not by the lure of the spotlight, but the full-time job he left behind not that long ago.

Despite his status as champion, Johnson views his career as only a part of his life, and he remains committed to making sure that his family will be taken care of when his time in the cage comes to an end.

“There is more to life than fighting. You need an outlet. For me, that’s my family. My wife does a good job of making me keep my mind off of the fight, and I love to spend time with her,” said Johnson, who married his long-time girlfriend Destiny last May in Hawaii.

“Even Dana White says it. At the last Fighter Summit, he said, `You guys have to save money, make sure you’re smart with your money, pay your taxes because this is only one phase of your life. There are going to be other phases of your life once you’re done fighting, and you have to be prepared for that.’”

Though he’s thinking ahead to life after fighting, Johnson’s primary focus is on making an impact in the sport while he can, a task he resumes Saturday night when he shares the cage with Dodson on FOX.

“I just think about training hard, staying healthy and always evolving and better. Five, six years down the road, I plan on still fighting and hopefully still being dominant. And after my time's done, when I'm at the end of my career, just hope that everybody looks at me as one of the best fighters in the world.

“He (Dodson) is super-athletic, and he has a great sense of style, and he likes to go out there and fight. I think it’s going to be a great fight between John and me because we both have great skill sets, and we’re just going to have to find out January 26th and see what happens.”

When asked to break down how his first title defense would play out, Johnson responded with a unique, but fitting answer, given his blue-collar, go-to-work mentality.

Whether it ends in the first minute or after five grueling rounds, Johnson is going to be prepared. While he won’t predict when or how Saturday’s main event will go – “I’m not a man who gives predictions.” – he did have one final message to share with the fans.