"Speed’s gonna be a huge factor whether he’s using his speed or I’m using mine. But I’m just gonna go out there and fight like I always do, put the pressure on him and see what happens.” - Demetrious Johnson 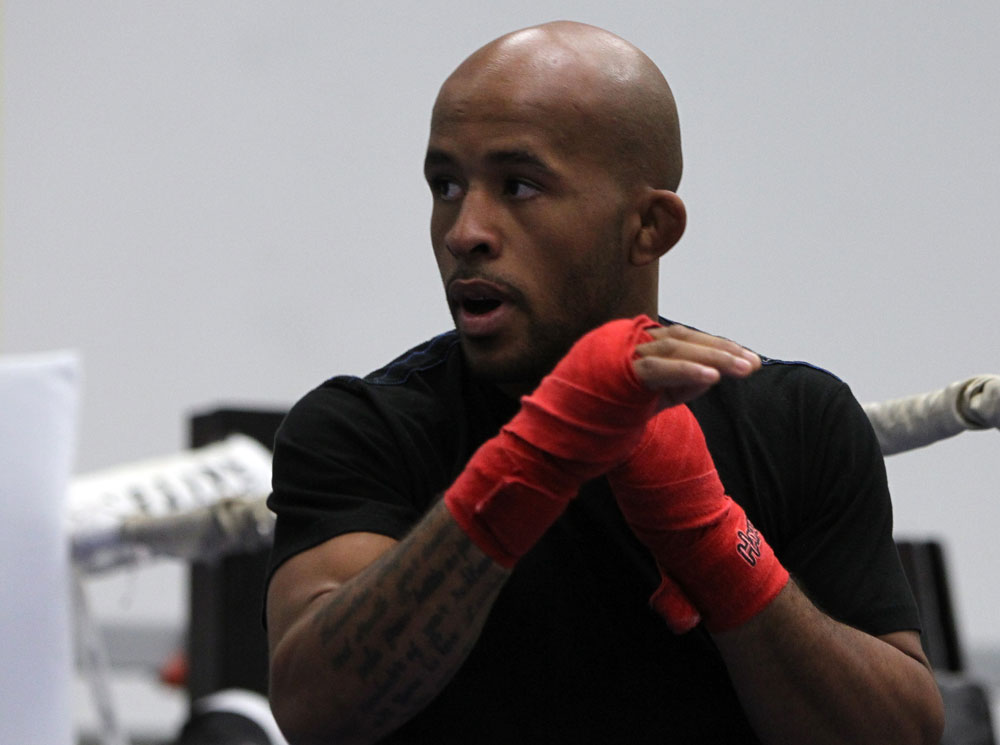 Take one look at Demetrious Johnson in a fight and it’s evident that he’s one of the fastest athletes in the UFC today. Who knew that he was going to take a similar path up the bantamweight ranks to a world title shot against Dominick Cruz on Saturday night?

Perhaps Johnson didn’t know it himself, but every time the UFC called, he picked up the phone, stepped up to the plate and made his own luck. Now he’s one win away from being called a world champion. It’s still sinking in for the young man dubbed “Mighty Mouse.”

“It’s hard to enjoy it because it’s part of the fight game and part of life,” said Johnson. “I’m just blessed to be in the situation I’m in and I’m happy to be in the UFC and fighting all the time. I want to be active and fight as much as possible. (Lightweight contender) Donald Cerrone, he’s having the time of his life. He’s making money, he’s fighting all the time, he’s being active, and he’s young, so that’s a good thing and how I want to be as well.”

It’s an aspect of mixed martial arts that has been lost in the world of boxing. In boxing, there’s so much riding on the perfect record and fighting the “right” opponents until you hit the 25-0 mark and can get a premium cable fight or a spot on a Pay-Per-View card. In MMA, a fighter can go from obscurity to the top of the heap in the space of a year and a half like Johnson has, simply by being willing to take risks.

“When the UFC calls for a fight, I accept any fight they give to me,” he said. “I beat Kid Yamamoto, stepped in for Brad Pickett because he got hurt, fought Miguel Torres, won that fight, and the next thing you know, they call me up and I’m the next challenge for Dominick Cruz.”

Sounds simple enough, but after debuting in the WEC in April of 2010 with a close loss against England’s Pickett, Johnson went on to hand Nick Pace his first pro defeat and submit longtime contender Damacio Page before moving over to the UFC in 2011. And while the names Kid Yamamoto and Miguel Angel Torres may not immediately register to casual fans of the sport, to fight game aficionados, you’re talking about two of the premier lighter weight fighters in history. And the 25-year old Johnson beat them both – in consecutive bouts.

“Going to fighting Kid Yamamoto from Damacio Page, there was a huge technical difference,” he said. “He (Yamamoto) understood range a lot more, he had good footwork and good boxing, and he also hit really hard. So that was a little different. And when I fought Miguel Torres, it was the same. They’re both tough, hard to put away, and they’re there to fight. They’ve been to the top level.”

Now he’s there as well, a turn of events that has surprised some observers. But as far as Johnson is concerned, if the man calling the shots believes he’s ready for a shot at the crown, that’s all that matters.

“It doesn’t bother me because people are gonna say what they want to say,” he said. “I can’t control what they think of me. If (UFC President) Dana White thinks I should be there, then I’m happy to be there.”

After gutting out a close victory over Torres in May despite breaking his fibula in the second round, he’s about to take on the King of the Hill in the unorthodox Cruz, another fighter who won’t be losing any fastest man competitions anytime soon. If you’ve ever felt the need to watch a fight in slow motion to catch all the intricacies of the fast-paced action, this may be the one.

“I think it (speed) is gonna play a huge part in the fight,” said Johnson. “He moves so much that it makes him a lot faster than a lot of people, and obviously speed’s gonna be a huge factor whether he’s using his speed or I’m using mine. But I’m just gonna go out there and fight like I always do, put the pressure on him and see what happens.”

And when it comes to breaking down one of the most hard-to-decipher styles in the sport today, Johnson feels like he’s got all his bases covered, with “The Wizard” himself, Matt Hume, working up a gameplan in the Pacific Northwest home of the AMC Pankration gym.

“We have a lot of guys in the gym who use a lot of movement to fight,” said Johnson. “One of my main training partners, Drew Brokenshire, he uses a lot of movement when he fights, and we actually have a coach, Trevor Jackson, who watched like 14 hours of footage on Dominick Cruz and he can imitate him down to a tee. I’ve been sparring him and Matt Hume, who’s an awesome wrestler and who outweighs me too, twice a week. So I think I prepared myself to get the best imitation I can for Dominick Cruz. But he can bring people into town to imitate me, and I can bring in people to try to imitate him, but it’s not gonna be the same until you get in there and actually experience what me and him can actually do with each other.”

What people are expecting from this Saturday’s title fight is a bout that may go 25 minutes but feel like only 10. Cruz and Johnson are dervishes in the Octagon, always looking to stay a step ahead of their opposition. Put them together, and they may give a run to Cruz’ previous bout with Urijah Faber for Fight of the Year consideration. It’s a lot of pressure for Johnson, considering that this is not only his first UFC main event, but his first main card appearance, but he seems to be taking it well, quietly confident that a 13 week training camp has touched all the right bases.

“I think my confidence comes from working out in the gym and training with the best in the world,” he said. “Before this fight was even in the books, I never took time off from training, and I’m always trying to evolve my game and get better. I broke my fibula in the Miguel Torres fight and I was on crutches, and when I wasn’t on crutches, I was already training for this fight. I’ve done the training that I need to to go out there and win this fight, and I trained my butt off. I believe in my skills, I believe in my coaches, and I’m just ready to go out there and see what happens.”

Title shots don’t come around too often, and they rarely rear their head a second time. Demetrious Johnson knows what’s at stake on Saturday, yet he’s not focusing on what could happen after the final bell. He’s got a fight to think about first, and if there’s one thing that “Mighty Mouse” is sure of, it’s that he’s got plenty of fight in him for Dominick Cruz.

“I’m a small guy, but I’ve got a lot of heart, and size doesn’t matter,” said the 5-foot-3 contender. “The only thing that matters is the fight in the person and how much that person wants it and how much drive the person has. I’m happy to be in the situation I’m in, I can’t wait to go out there and fight on a live card, being the main event, and hopefully I’ve got Dominick Cruz’ number. He’s beaten everybody in the weight class so far, but I’m going out there to try and seize the opportunity that’s been given to me.”