Demetrious Johnson: Not Releasing His Grip on the Flyweight Crown

"If I can get up and walk towards you, we’re gonna keep on fighting." - Demetrious Johnson 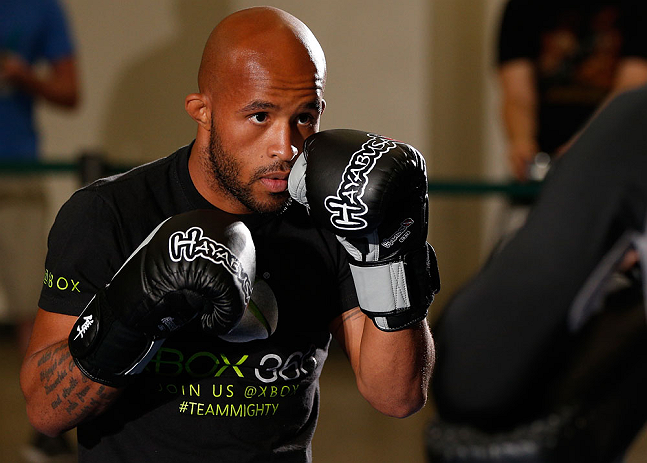 Demetrious Johnson could have packed it in. After being rocked and dropped by challenger John Dodson in the first two rounds of their January bout, the UFC flyweight champion could have mentally checked out, assumed that it wasn’t his night and simply decide to ride out the final three rounds and live to fight another day.

That’s not what champions do, and “Mighty Mouse” is most certainly a champion.

Johnson took the next three rounds, earning the unanimous decision and retaining his title for the first time. In a career filled with big wins and exciting battles, this one was the fight for the time capsule, the bout that says this is what Demetrious Johnson is about.

“In the UFC, they judge each fight by rounds, so it’s almost like if a person wins two rounds, he can run the whole third round and still win the fight,” said Johnson. “But I never think that way. Even though I got rocked a couple times those first couple rounds with Dodson, I judge a fight overall. Those first two rounds were a little spotty, but I don’t think he blew me out of the water by those two knockdowns. I still think they were competitive rounds, but those knockdowns did steal the judges’ eyes. But for me, it’s just fighting. Those first two rounds, I had to get my rhythm and figure Dodson out because he’s a tricky fighter and he’s very crafty. So once I got my timing down on him and just started using the Muay Thai and closing the distance against him, I got him tired and made him work to get the belt.”

Dodson wasn’t going to get it that night, and Johnson expects to crush the dreams of his next challenger, John Moraga, this Saturday in Seattle. But that shouldn’t be a surprise when it comes to Johnson, and neither should be the performances that have led him to wins in 17 of his 20 pro fights, especially when the first 14 of those victories came with the Washington product working a full-time job at a warehouse in Tacoma.

“I started training because I loved the sport and I loved to fight,” said Johnson, who began training in 2005 after seeing The Ultimate Fighter. “At the time, I was trying to make sure I could cover my bills, and as far as making this a career, I didn’t know if I was on that path yet. They had the 135 class in the WEC, but I was just taking fights whenever (coach) Matt (Hume) got me some fights, and I just kept going to work. My mind was focused on my job because that’s what paid my bills and put food on the table.”

With each passing fight and each passing win, Johnson began to get noticed though, and Hume, one of the most respected coaches in the sport, always made sure to talk up his charge in interviews. By April of 2010, Johnson was in the WEC, and his profile rose even higher. He didn’t quit his day job though, and he was lucky enough to have a supportive employer in Pete Bohockey.

“My boss, I love the guy to death and he supported me,” said Johnson. “I was working for him even when I was an amateur. I would say ‘hey, I need to go fight this weekend, so can I get Friday off to cut weight? And then I fight Saturday, so I’ll be back to work on Monday.’ He would go ‘absolutely.’ He was a huge fan of mixed martial arts, and I remember when I would go fight in WEC, I would ask for a whole week off, and he’d give me time off then as well.”

Moving to the UFC in 2011, Johnson’s wins over Kid Yamamoto and Miguel Angel Torres earned him a title shot against bantamweight boss Dominick Cruz, and it was finally time for him to leave the day job behind and become a full-time fighter. Bohockey was firmly in his corner.

“He always told me that he would fire me if I chose work over fighting,” said Johnson. “He just believed in me.”

Johnson would lose a five rounder to Cruz in October of 2011, but after the UFC introduced the flyweight division, the 26-year-old found his home, becoming the UFC’s first 125-pound champion last September when he decisioned Joseph Benavidez. Today, he’s got two title fight wins under his belt, he got married to longtime girlfriend Destiny, the two bought a house, and just last week they welcomed a son, Tyren, into the world. That’s a lot for anyone to take in at once, but Johnson has handled it with poise and maturity.

“It’s part of life,” he said. “And I never wanted my life to slow down ever since I became champion or even when I became a professional athlete. I don’t think it’s fair to have my wife sit there and be a shadow in my life, so I’m very excited about this. I’m ready to have kids, I want to enjoy life, and I want my kids to see what their father does to provide for the family. I think it’s great.”

Such humility is hard to come by in pro sports these days, but Johnson has a broader perspective than most, most likely a nod to the days when he was moonlighting as a fighter during his days in the warehouse.

“I became a champion, but you still have to stay humble because I know if I lose my next few fights, things could change drastically,” he said. “So I stay humble, I train hard, and I know that there could be a day when I end up back at a 9 to 5 job, but I keep telling myself that I’m gonna train my butt off so I don’t have to go back to that and I can keep on providing the things I need to keep a roof over my family’s head. You have to stay humble. You see it all the time with professional athletes; they make all this money over their career and the next thing you know, they’re dead broke. I don’t want to end up on that list. So I try to stay smart, live within my means, keep training, and I approach every fight like it’s a fight.”

A fight in which you’ll have to take him out in order to beat him. And you can ask John Dodson how hard it is to do that.

Check out Demetrious Johnson in UFC on FOX 8: The Title Fight