"Joseph and I are going to go out there and put on a great fight and it's going to be one of the best fights of the year." - Demetrious Johnson 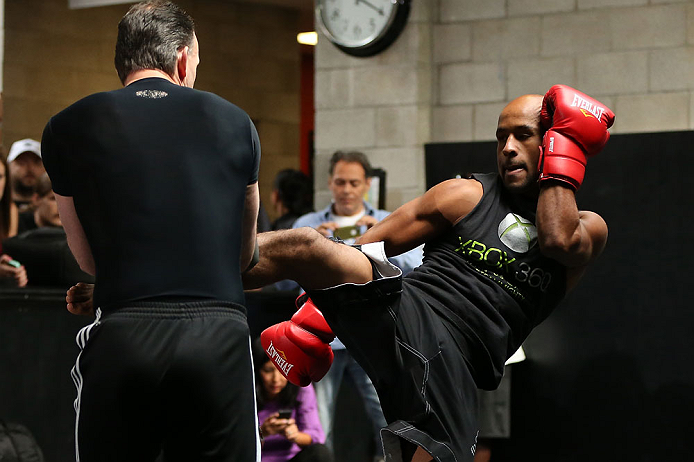 There’s really no subject involving the Octagon that the 15-2-1 talent cannot see the silver lining in. Dropping from 135 pounds to 125 pounds? Another avenue for a UFC title. Battling to a draw and, in turn, a rematch against the same top-ranked opponent in the span of three months? An opportunity for more experience and better preparation for the next fight. A reshuffling of headlining bouts due to a cancelled pay-per-view results in Johnson’s title shot against Joseph Benavidez being demoted to co-main event status in lieu of the UFC light heavyweight championship fight? A perfect chance to make Jon Jones’ fans “Mighty Mouse” fans.

Whether it’s Johnson’s natural demeanor, being secure with the insightful training guidance he receives daily from “The Wizard” Matt Hume, and/or marrying the love of his life Destiny “Mrs. Mouse” Johnson in May, he keeps on smiling and keeps on winning in the Octagon en route to his first and the company’s first flyweight championship bout. To secure that title shot spot, Johnson had to best Ian McCall once and for all in their rematch at UFC on FX in June. As mentioned, Johnson had no hard feelings about facing “Uncle Creepy” again only a few months after the controversial ending of their first tussle in March. If anything, it was an excuse to get better at cutting weight and at cagefighting.

“I was happy to go and fight a high caliber fighter like Ian McCall again to get ready for a title fight against Joseph,” affirms Johnson. “My feelings were good. The second time, I felt more acclimated, but I think it's going to take a lot more time to really acclimate. Dropping to 125 is a lot of weight and it's going to be something I have to get used to. This is going to be a third time doing it within a year's span. The more times I drop down to 125 the more I'll get used to it.”

It was just so nice, they had to do it twice. Following their Fight of the Night-winning draw, Johnson and McCall took to the Octagon to settle the score of who would face Benavidez in the flyweight title final. While many sold the rematch being rounds four through six, it was instantaneously clear that Johnson was physically a healthier and more solid looking 125 pounder than in the first meeting. Besides the visuals, Johnson’s defensive wrestling was on point as well as his cardio, which faded the first time. In the original scrap, the highlight moment was McCall in mount ending the third round, whereas Johnson’s first round knockdown of McCall left the most lasting image in the rematch.

“There was a huge difference with my weight,” reveals Johnson. “I felt a lot better and I even looked bigger because my body held on to its water and nutrients better. It was a great fight. I'm glad I had those two fights with Ian McCall because two high-caliber fights like that will get you prepared for anybody you fight next. I wanted to show the world that I had been working on my takedown defense, and if you take me down I'll get right back up. Obviously, I would have loved to have knocked him out, have him go lights out from that one punch, but Ian McCall is a tough guy. I want to be the best in the world and I think I showed that in that fight. I'm getting better at 125.”

At only 26 years old, Johnson is at the top of the food chain in two weight classes in the UFC. Although the lightning quick, 5’3” standout has moved to flyweight, his last bout at bantamweight was for the gold against Dominick Cruz, and prior to that he was on a four fight winning streak dating back to his WEC days. Under the Zuffa banner, he has become an immediate fixture by making eight trips to the cage in two years, with his second title fight just on the horizon. For Johnson, a fighter’s life is about continually training to be ready, competing as much as one can, and always striving to be better than your previous best.

“I'm young, I'm only 26 years old, and I want to stay active,” he explains. “In mixed martial arts, I love to be active. I would love to take as many fights as I can while I'm young because as I get older the recovery will take a lot longer. I want to be as active as possible now, whether I'm champion or not champion. It's all about getting the fights. I pretty much train all year long just in case the UFC gives me a call telling me someone dropped out and asked me, 'do you want to take this fight?' Hell yeah, I want to take that fight! I'm here to fight. That's what you pay me to do. Every fight is the same in that you go in there and fight. Whether it is a title fight or a non-title fight, whether you win the fight or don't win the fight. You wind up back in the gym training to be better for the next one.”

Up next for Johnson, the history-making inaugural UFC flyweight championship bout at UFC 152 on Saturday against Benavidez. While Johnson tangled with McCall, the Team Alpha Male stalwart faced Japanese star Yasuhiro Urushitani in March. After a grappling heavy first, Benavidez crossed the Octagon to deliver a perfect right hook on Urushitani’s button, which closed the struggle out at 11 seconds into the second round. The win earned Benavidez a Knockout of the Night bonus, escalated his record to 16-2, and put him in a spot opposite Johnson in the title final.

“Joseph is a great opponent,” asserts Johnson. “He's one of the best fighters in the world at bantamweight and flyweight. I'm looking to get in there and test my skills against him. He's got a great skillset and I can't wait to see how we match up against each other. Joseph is kind of straightforward. He comes out and fights you. He's a specialist. He has heavy power when he throws his overhand rights and lefts. He can switch back and forth.”

On paper, it’s easy to draw comparisons about two top flight fighters with nearly identical records who have both battled to a close, but losing, decisions against Cruz for the bantamweight championship and, now, find themselves staring across the Octagon for the UFC flyweight belt. And, the two became friends on a UFC publicity tour where they did see a Coldplay concert together. But, the true similarity is that they’re both incredible competitors who, despite giving up a lot of size, win way more than they lose even when fighting the best at a heavier weight division. They’re both strong, explosive, confident, and well-rounded, and should be an amazing test for each other.

“I think we're both great competitors and we both have a drive to win,” adds Johnson. “We push ourselves. We have fought a lot of bigger guys in our career. Other than that, we have different types of striking skills and different ground skills as well. But we both have that type of determination to win. We know it's a business. We get along outside of the cage. We're both chill people. I don't think that's going to play any part in us punching each other in the face. We both know it's a business and we both want to be a part of history.”

In preparation for the Benavidez brawl for the belt, “Mighty Mouse” is busy training at his home gym in Kirkland, Washington with his highly regarded coach Hume at AMC Pankration. It’s the same batch of loyal and knowledgeable fighters that have honed Johnson’s skills for his previous UFC outings like Trevor Jackson, but there was one new face added to the gym: Bibiano Fernandes. The DREAM featherweight and bantamweight champion was in camp for 4-6 weeks in the lead-up to his own bout, and Johnson believes he was a boon to his own training camp, “I had a lot of help from him on my ground game. He's just a beast on the ground in mixed martial arts and Brazilian jiu-jitsu.”

Regardless of outcome, UFC 152 will be historic as one of the most exciting weight classes thus far in 2012 will crown its first ever champion. “It means the world to me to be fighting for this belt,” says Johnson who has gone toe-to-toe for six rounds already to get this opportunity against Benavidez, and he will not let it slip past him without a helluva fight. “Joseph and I are going to go out there and put on a great fight and it's going to be one of the best fights of the year. I'm a hard worker and I'm always in the gym training to be better next time. Hopefully, I leave a good impression on the fans and, hopefully, I get that title.”

This Saturday, two of the unquestioned best at 125 pounds will square off for gold in the greatly anticipated first ever UFC flyweight championship title fight. “Don't miss out on history being made,” states Johnson, who will be the happiest person on the planet if he wins, and, knowing him, will be gracious with his chin held high and be more than ready for a rematch if he loses. Either way, he will be back in the gym with a positive attitude training to be even better next time.